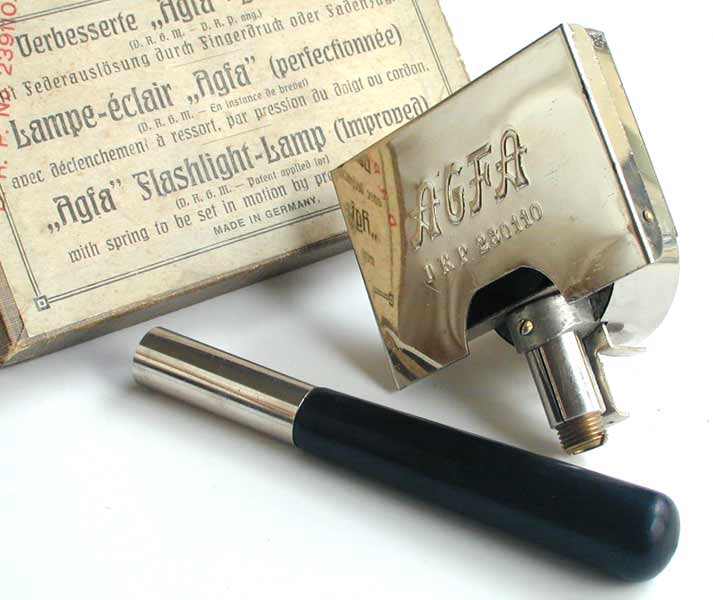 This is a device for lighting with  flash powder, poudre-éclair in French. There is a post in the section do it yourself, with instructions for preparing the mixture and showing the types of lamps, for amateur and professional photography, in the late nineteenth century and first quarter of the twentieth century. It takes only two ingredients, it is very easy to prepare and use, provided you observe certain safety measures. Access the link flash powder.

This is a commercial model from Agfa, nicely finished. With a small size, it was a piece to accompany a portable camera and represents a new concept of photography aiming for a much larger audience than the professional photographer.

Its working principle is based on a small flint, an alloy of iron and cerium, which is rubbed by a toothed wheel and throws sparks onto the powder inside the tray igniting it. A spring must be armed and the thumb (figure below) or a pneumatic pear (with an added accessory) releases it and the gear wheel rotates rapidly producing the effect. 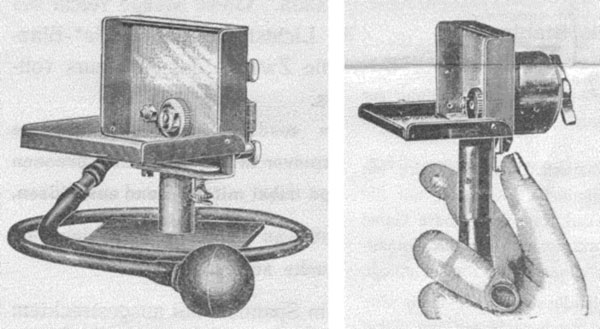 Below is an instruction sheet that talks about the powder that was sold under the same brand Agfa, Germany. It came in two separate parts that should be mixed for use. Its combustible material was magnesium but there is no mention of other ingredients. The simplest formula would be a mixture with Potassium Nitrate, but powder manufacturers had their secrets to regulate the length, lighting and smoke, that was a undesired side effect. As a rule, powders for illuminating have a lower proportion of oxidant and greater of fuel, so as to lengthen the burning time and reduce explosive effect, while this would be the objective in the gunpowder industry, it was to be avoided in photography.

It is interesting to look into quantities. It was in the packing a small spoon, the right measure for ½ g.

But those are not quantities for this specific lamp. They are for the powder in general. There is a remark at the bottom saying that for the Flashligh Agfa Lamp the maximum quantity should be 2  ½ g and that this should be enough for all amateur work.

Below, instructions for the lamp itself, now in English. About the flint, the sparking metal, that it is said to last for hundreds of fires, there is another publication that reviews the different systems offered at that time, quoted in the post flash powder, in which the author considers that there is a quick deterioration of mechanism an flint itself due to the heat produced during the fire. It does not mention Agfa specifically. The packaging says “improved”, maybe it was really fixed. To me it seems a sturdy device and I fired it a dozen of times without noticing any visible degradation.

Here an add at the forth cover in Photo Miniature, March 1910. The key message is exactly Improved Model, Absolutely Unfailing, Always Ready for Use, Handy Pocket Size, The ‘unfailing’ issue should be the key point in this category. There is a great deal of uncertainty in events like sparks and ignition. I experienced already failures with the Agfa lamp but, I have to consider that it was a home made flash powder and maybe the flints are not as good as they were in former times. 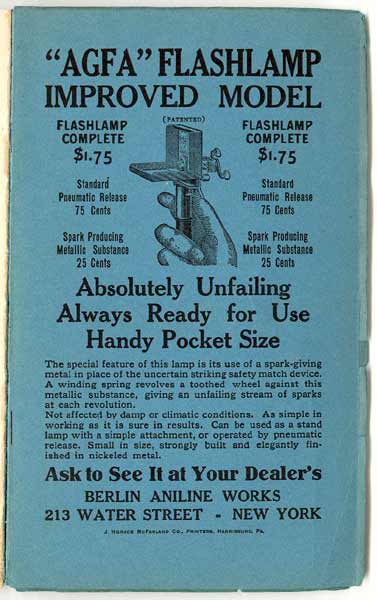 Here is a picture showing how the tray looks like when charged and ready for use. This amount of powder actually serves to make a full-length portrait with f11 in a 125ASA film. After some failures I started to put a very small piece of fast fuse in the output of sparks and it solved. It is a fuse that is bought in fireworks stores and is nothing more than a rolled up and impregnated paper with gunpowder. Less than 1 cm is enough because it works just as a starter.

This was an experiment that did and that I recommend to anyone who wants to use flash powder also do, because it will save many other more complicated and consuming tests that may be even frustrating. The idea was to film a complete combustion process since the first sparks till the clear decrease of flash output. Filmed at 30 frames per second and then analyzed in a video editing software and then being able to correspond time and events. The analysis range was only 1 second.

As it was 30 frames per second I reproduced every second frame so that the time increases at increments of 1/15. We see that even 4/15 the sparks are still sort of erratic. In 5/15 is beginning to look like a well-defined glare that still takes 4 frames to achieve something really significant. Four frames means something very close to 1/4 second.

There is a noise of burning that follows these first two stages and actually grows in the third and most important, the one that runs from 9/15 to 13/15. This helps a lot in training for a sync that is done manually. When I use the Flashlight Agfa Lamp I hold it in my the left hand and the camera cable release on the right. I am right-handed and found that the most critical would be the shutter. When noise passes for phase two, marked in green, it’s time to press the shutter or cable release. The delay of your reaction is the time to enter the phase marked in red when the shutter should already be open to receive the light at full power.

After that experience I understood better the burning process and no longer worries me much the question of timing if I can use a shutter speed of 1/8 or slower. 1/4 perfect fits to catch the whole peak of the cycle. But I’d rather open the lens one more stop. Since light is plentiful, even opening the lens we are still at f8 or f11. Then it is easier to sync 1/8 inside the 1/4 length of the glare.

I believe that timing depends more on a specific powder recipe than on the lamp. I used the same type of strategy with another larger device  (also in the flash powder post) and it worked the same. But I advise you to record your powder burning at least once and analyze it in a video editor in order to understand its behavior. Hear the sound many times and get used to the relation light and sound.

As stated above, with more fuel than oxidant the burning goes slower. With more oxidizing, it is faster (and more dangerous). Start mixing with 50% and perhaps slight variations on this can help find the best proportion. But I always stayed with 50/50%.

Although this lighting technique is very old, as old as photography, I find it very interesting to use precisely with digital cameras for the ease they provide for verification and eventual immediate correction if an error has occurred.

One picture made with the Flashlight Agfa Lamp. I used a Graflex Crown Graphic with 4×5″ film, Ilford FP4 Plus ASA 125, lens was Wollenkak Optar at f16 and shutter speed 1/8 s. 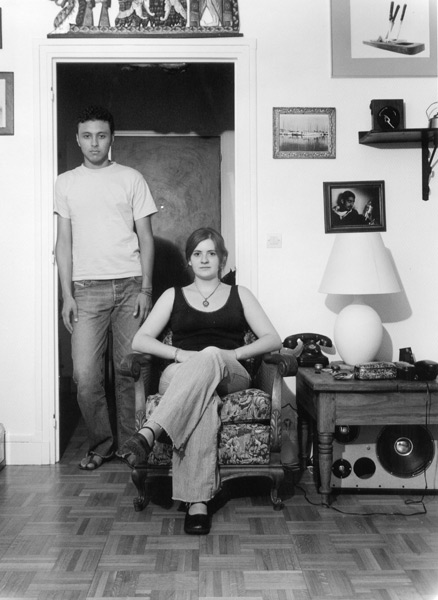