The practice that I will describe is the one that allowed me to take some reasonable pictures of seagulls in Hamburg harbor in Germany in 2008. Later, in other occasions, it served me again and I lost less time to catch some images birds flying. That is the case, to my level of requirements, of this picture made in Peniche, Portugal, in May 2016. It is not at all sophisticated and did not grant me any award in nature photo contests, but, if one day you find yourself with a flying opportunity in front of you, maybe, you can also make use of this “method”.

In Hamburg I had a Olympus OM1n with a Zuiko lens 300mm f4. Being a totally mechanical camera, focus was manual. I needed a high speed, at least 1/250 s, in order to fix movement. That obliged me to use the lens wide open as it was a dull day. It is very hard do manually focus a 300 mm, wide open, on a subject that flies at relatively hight speed. I tried to follow the birds while turning the focus ring but just keeping it framed was already a complicated thing. It would be too much pretentious to try, on top of that, find the right focus. Then I made the following reasoning:

I won’t say that my success ratio was not even 10%. But out of a 36 frames roll film I printed 2 that made me happy about it.

Now in Peniche, I had a Canon Rebel 3Ti and a lens EF 18-135 f/3.5-5.6. I remembered Hamburg, turned the autofocus switch to ON and smiled mischievously approaching the banks to get in position for a revenge. But it did not work as expected. No. Even using the AI-Servo, supposed to follow the object in focus while you keep the shutter button half way, the birds were either too much far and small to start tracking or too fast to catch when they would get closer. Well, at least digital it is not as expensive as film, I switched off the auto focus and proceeded the same way as I did the the good old Olympus OM1n. Set a distance that looked manageable, set also exposure to manual, as the automatic would probably consider only background and not the bird, and started following and clicking them. A remarkable surprise made me feel anyway the value of progress. Even with the autofocus off, having the shutter button half way, whenever the seagull would be in the center and in focus the camera beeped and a red led flashed in the viewfinder. Not that I could wait for the signal and react in time, but that feed-back trained my eye and after a while I was getting used to a pattern of timing for clicking.

I know that if I would have stayed home and saved the money spent in flight tickets, restaurants, car rental, ten days hotel, etc, maybe I could buy one of those top lenses and bodies and I could have made instead some wonderful pigeons pictures from my apartment’s window in São Paulo. OK, but we can’t get it all, so I used my Rebel T3i. The picture below is one off those two I made in Hamburg. I was lucky that the click happened exactly when the seagull touched water and that created an “explanation” to that very dark background that otherwise would be something indistinct. The exposure was also happy a the body shows  a good volume and variations. Film was Ilford HP5 developed in 510 Pyro. After printing in silver gelatine paper the the image was toned in blue. 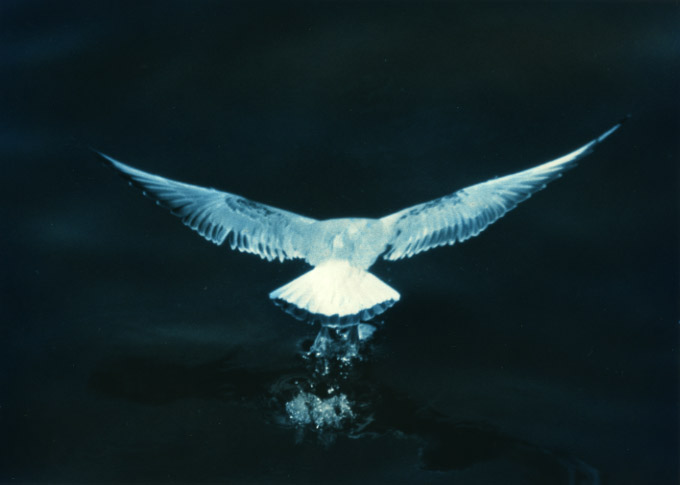