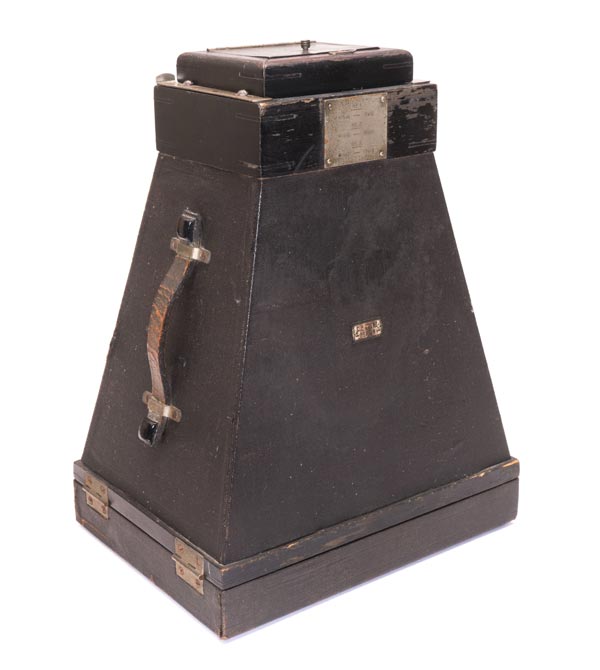 For a long time, photography used negatives that were the same size as the final copy, that is, they were not enlarged but printed by contact. The cameras were big and heavy so that the final image could be reasonably sized. In the 1880s, with the development of gelatine emulsion with silver halide, much more sensitive than collodion, tripodless photography, with the camera simply in the photographer’s hands, became possible. As a result, cameras have become smaller and more portable. This created the need for equally practical and easy-to-use enlargers so that, starting from a small negative, it was possible to restore a size that was pleasant to look at at arm’s length.

The principle of every analog photographic enlarger is the projection of the image of the negative onto photographic paper. Projection means that light needs to pass through the negative and about this we have to remember that electric light, although known since 1802, only began to become available in homes in the beginning of the 20th century. For this reason, many enlargers were developed using sunlight that we can generically call daylight. This is precisely the case with this Vergroβerung-Aparat (enlarger) by CP Goerz Berlin. It was manufactured in the early 20th century for 4.5 x 6 cm negatives that can be enlarged up to 13 x 18 cm on it.

The use of sunlight for enlargements was already used since the beginning of photography. This was the case for professional applications, for the reproduction of works of art, documents or simply to have photographs even bigger than the negative, which in itself was already large. For this, many ingenious devices were developed to direct sunlight to the negative and from there to the positive, usually on paper. 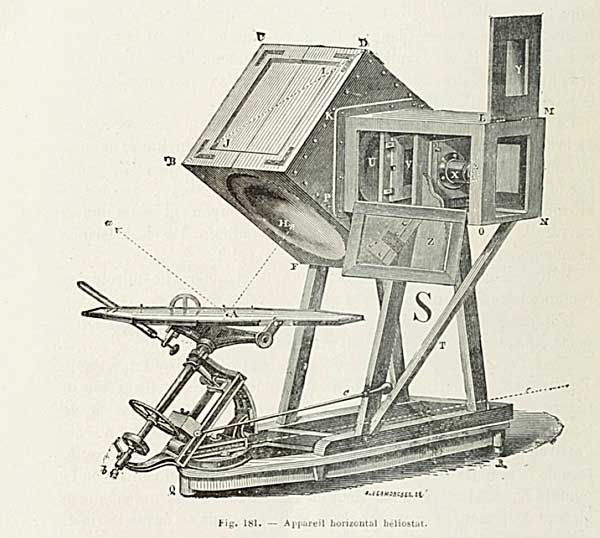 This complex apparatus is presented in the Traité général de photographie by DV Monckhoven (7th edition 1884). It’s called Agrandisseur Heliostatic, it’s an enlarger that, through a gear system, turns a mirror that follows the sun’s trajectory and throughout the day and so is always sending light into the large cubic box that can be seen at the top. Inside it, a second mirror sends the light to the negative, placed in Y and the image of this is projected by lens X into a dark room (not shown in the illustration) where there is photographic paper that will be printed.

The Goerz, for the rest of us 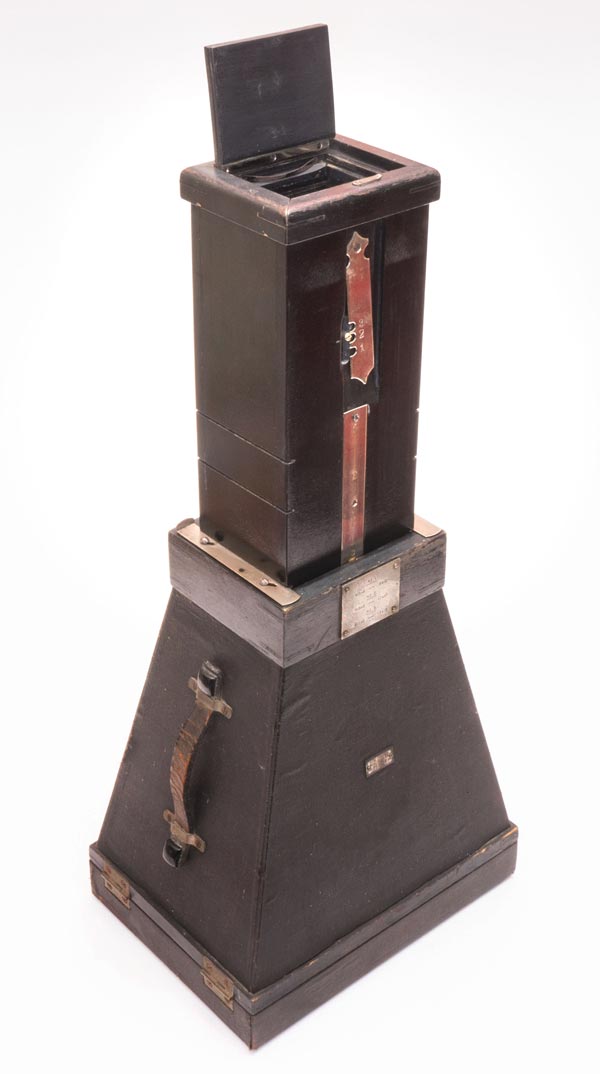 But this Goerz magnifier was for the weekend amateur photographer. It can perfectly be used nowadays. There is no need to replace any light bulb or update the firmware. It’s very simple. The negative, usually on a glass plate, is placed on top with the door closed and locked. 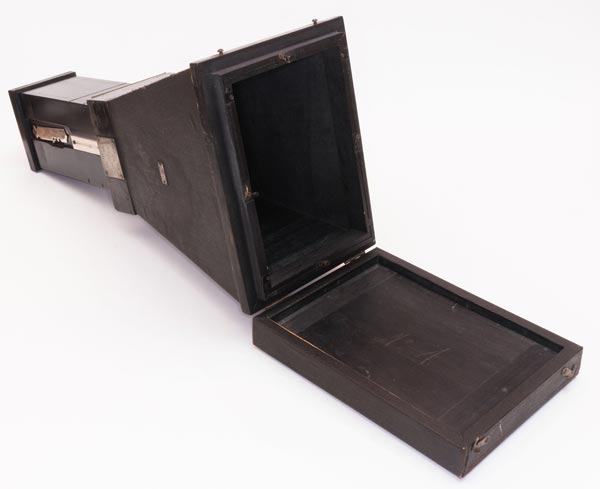 Photo paper is placed on the wide base of the enlarger. This needs to be done in a dark room or inside a light-proof bag or cabin. Changing bags, which are suitable for this purpose, were available on the market. They have a zipper on one side and two sleeves to tuck the arms in and be able to change the paper without light entering. It’s also not complicated to make a new homemade. 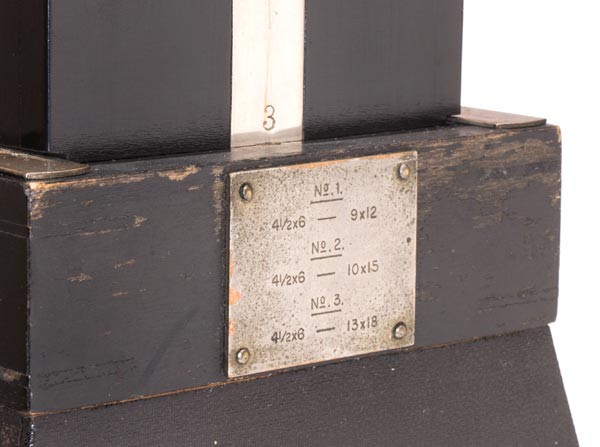 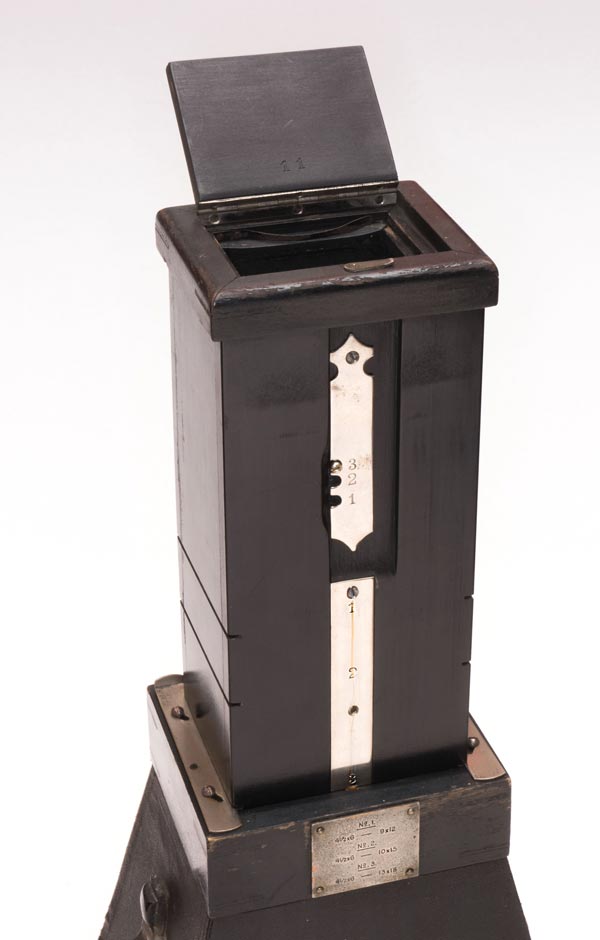 Before making the exposure, the focus also needs to be adjusted. This is done by raising or lowering the lens with the ruler at the top of the column. Just follow the same magnification number, 1, 2 or 3. 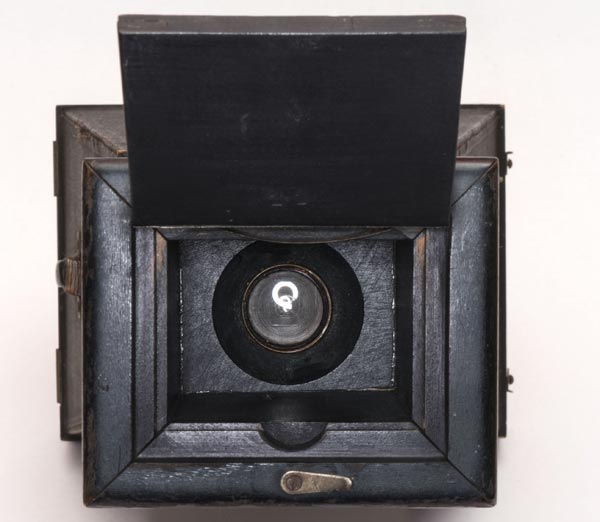 Inside the column, a lens with a fixed aperture will project the image, always in focus, according to the above mentioned pre-defined parameters. To expose, just open and close the door for the correct time. Someone could easily adapt multi contrast filters on the lens. But as for the correct time, it is necessary to make an estimate and after 2 or 3 attempts something should be at least acceptable.

Goerz was a very important firm in the history of photography. Its greatest achievement was probably the Dagor lens, a real milestone in the history of optics. But it also manufactured cameras and accessories, such as these enlargers. The image below is from a 1911 catalog, source Kameras DL. In advertisements it was mentioned as an ideal companion to a nice camera called Vest-Pocket Tenax, or Westentaschen-Tenax, that is the same in German. The Tenax format is 4.5 x 6 cm,  which is exactly the size of the enlarger negative holder. 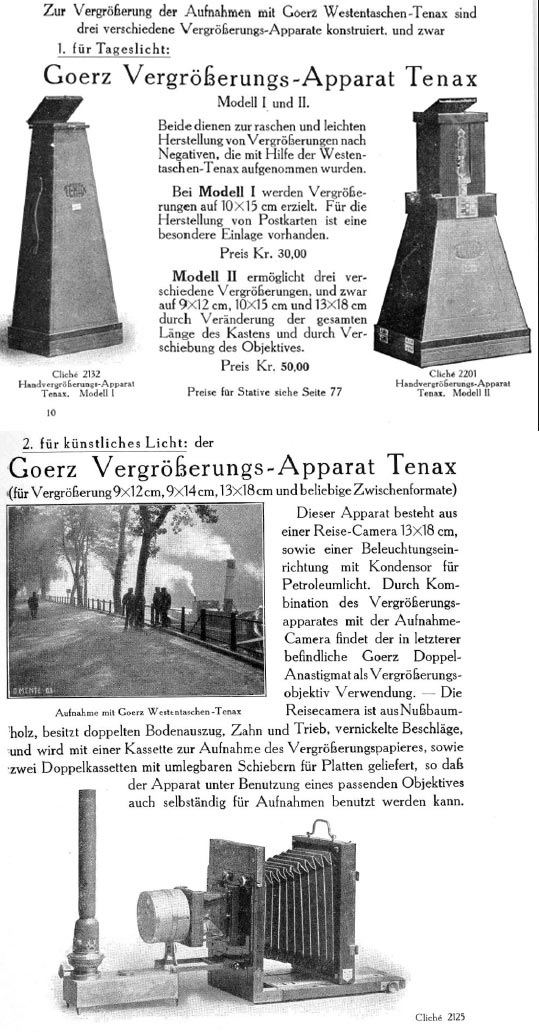 The first enlarger produces a fixed size of 10 x 15 cm. With this format, cartes cabinet were made, a photograph, usually in albumen print, pasted onto a cardboard support. They were very popular in the late 19th century when they were exchanged between friends and family, but they were usually done in professional studios. Already at the beginning of the 20th century, with the availability of prepared papers and chemicals for sale, it must have been very attractive for an amateur photographer to be able to produce their own cabinet cards using these enlargers.

The second enlarger is the one I have in the collection and it offers the three formats mentioned above. The third is an independent camera with bellows and 13 x 18 cm format to which a Tenax itself and a condenser with a kerosene lamp are attached. I don’t really understand how to focus in this case because the camera usually doesn’t adjust to such short distances. Perhaps an extension tube for approximation is part of the accessory. The text even mentions the advantage that with this feature the camera lens itself, a high quality lens is used for the prints (Goerz Doppel Anastigmat is Dagor).

In the ad below (source: Pacific Rim) we see more details of Tenax and in the last line the Daylight Enlarger. This advertisement is not dated, but by design it must be well into the 20th century. Probably the Automatic Enlarger (one line above) must already have some light source of its own, maybe electric. But the daylight magnifier is still there, it continued to be useful for regions where this convenience had not yet arrived or simply because it seemed superfluous since daylight could solve the issue very well. 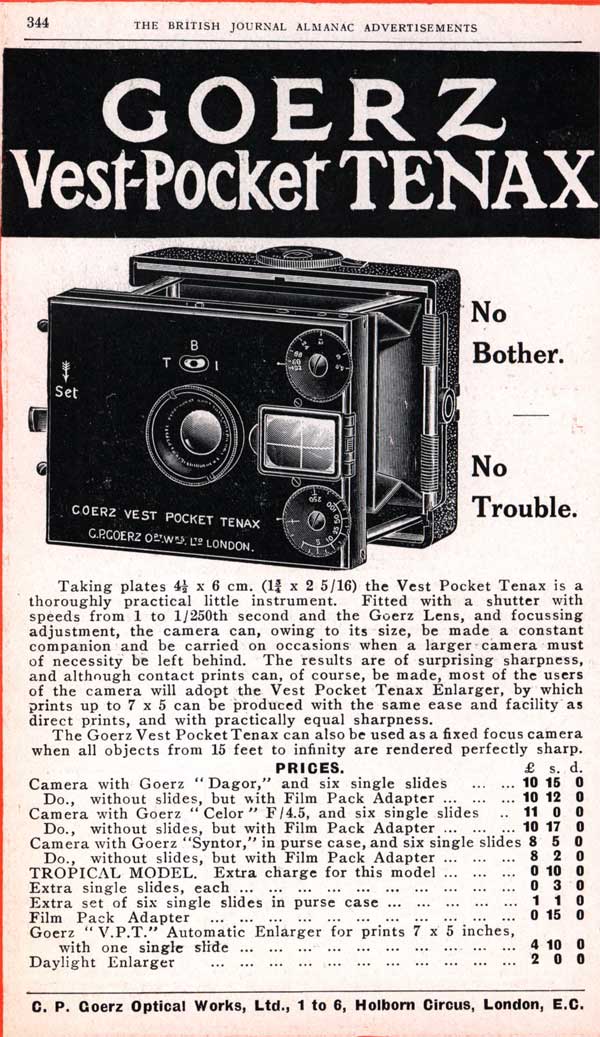