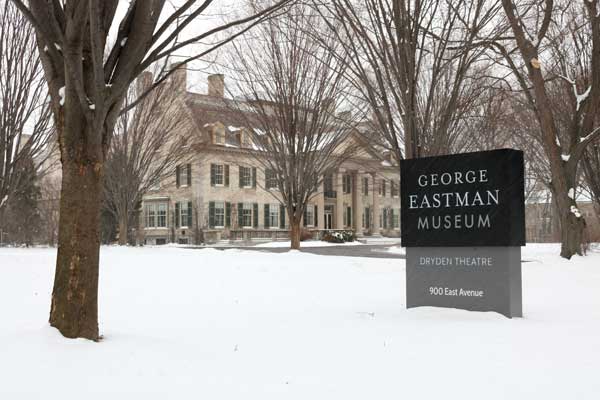 George Eastman Museum is a multifaceted institution challenged by its own superlative assets in different branches of image making. There you find a fantastic library with historic material like the “Pencil of Nature” from Henry Fox Talbot, complete Camera Work (1903–1917) edited and published by Alfred Stieglitz, Josef Maria Eder yearbooks and handbooks, photographers’ annotations, manuscripts, periodicals, technical publications and the list goes on and on until present day. It is also in their archives a huge collection of photographs in all kinds of printing techniques, from the very beginnings to contemporary – thousands of daguerreotypes for instance. There is a film preservation department aimed to the collection and also in developing and sharing knowledge about how to care and restore any image recording material. Photographic and Cinematographic technology collection ranks among the best in the world with all types of cameras, lenses, darkroom and processing devices. All of that and yet the house, the mansion, built by George Eastman and where he lived his last 30 years.

Would I be an archeologist in the year 6000, I would like to dig right there, where the George Eastman Museum is. Probably nothing will say more about our age than our relation to images, and over there we find a dense and extremely rich sample of it.  The today’s question is how to make that asset alive and offer opportunities for thoughtful insights, for understanding and digestion, in our own time. That is the challenge faced by their curators.

I visited it only for one day, taking the opportunity that I was “nearby” in Boston. Unfortunately I could not see the library nor any of the other stored treasures: lenses, cameras or photographs. I had an appointment the day before (you need an appointment) but a snow storm canceled my flight and for the next day there were nobody to help me out. So I can only report my impressions about what was on show and my general experience.

It opened as a museum in 1949 to exhibit its collections. In 1989, a large extension was built. The house itself was emptied and carefully restored to look exactly like it was when George Eastman lived there. They say that 85% of furniture and objects were found and brought back in place, thanks for a large number of pictures (as we could expect) from its former times, it was possible to do it faithfully.

That initiative, stressed by guided tours and other information materials,  gives to visitors a strong impression that the museum is more about George Eastman private life and character, than on his views and influences, or yet on the impact of photography and cinema in our culture. Even Kodak’s role appears in a far second place. 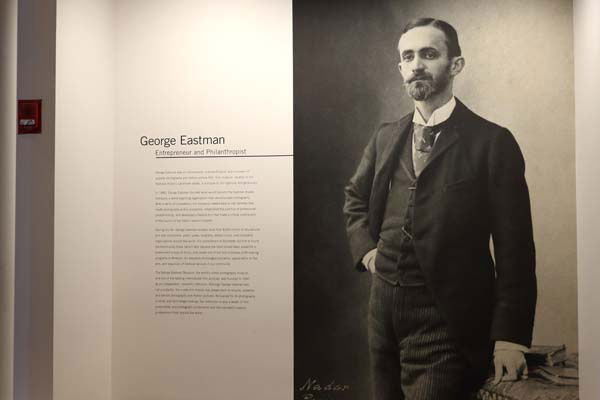 A few words about George Eastman before we continue with the museum. Born in 1854, George had two older sisters. His father, was not very much present, running a farm (where family lived) and also teaching bookkeeping in Rochester 140 miles away. He died when George was six years old. The boy was very much attached to his mother and that lasted till adulthood. At the age of 15 he got a job as an office boy and later became a junior book-keeper. He got in touch and experimented photography when he was 23 (1877). Photographers used to prepare their own negatives and prints and George Eastman started preparing dry plates and selling them using a coating machine that he developed. It was an evening production after book-keeping working hours. He resigned in 1881 . That was the beginning of Kodak. He was clearly a workaholic, perfectionist, never married, didn’t like publicity about his private life, lived with his mother and was very much depressed when she died in 1907, when they were already living in the mansion at 900 East Avenue where the museum is. At the age of 72 he had terrible pains in his spine. Apparently, the idea of taking a wheelchair was unbearable to George Eastman and he committed suicide with a gunshot in his chest. 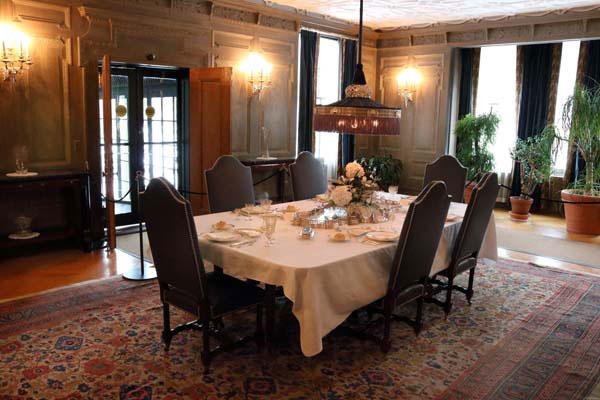 The house is gorgeous and leaves no room for any doubt about the extension of his tremendous financial success. Nevertheless, accumulate money was not George Eastman’s concern or pleasure. It is well known and recognized his philanthropist character. The tour guide said pointing to the table at the dining room, for the awe of the attendance, that exactly over there he signed a 30 million dollars check as a donation to Rochester University.  He was supporter of many medical and educational initiatives, in USA and also in England. He used to say that he preferred to give away during his lifetime than preparing or setting up a foundation for future philanthropic  projects. 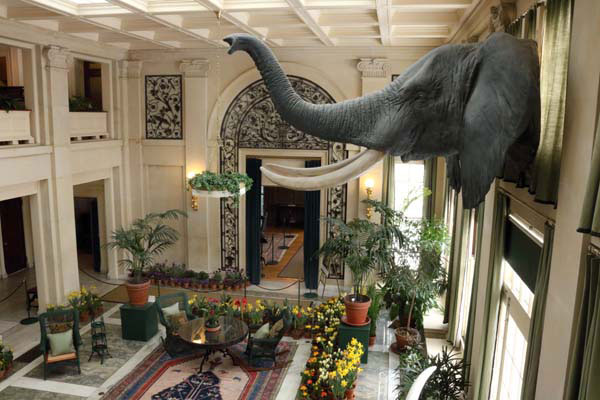 He liked also hunting. In many rooms there are hunting trophies like this ivories he brought from Africa. I appreciated the museum for not editing this part of his life. It would be pitiful trying to be politically correct to fit into our current standards. For sure, many wonderful people were hunters at that time. 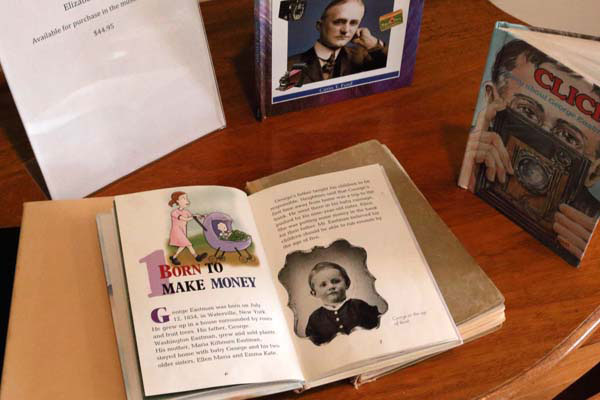 His entrepreneurism is set side by side with philanthropism at the top of his personal qualities. Photography was an opportunity he sensed at the right time, the one he seized with the perfect consumer insight, gave the correct engineering approach, developed with the appropriate managerial skills, but, it could have been any other. His saga would have been great anyways. It could have been with soaps, packed food… whatever. He was “born to make money”. This is probably true and remains by all means something we can admire. Would be also nice having some more weight on the photography side of the story. What was going on in society in those days? Why were people getting so mesmerized about recording their memories? What the way they photographed themselves tell us about them?  How did the industry fulfilled or drove that call? These questions seems to be considered all too obvious to be addressed or lacking interest for whatever other reason. 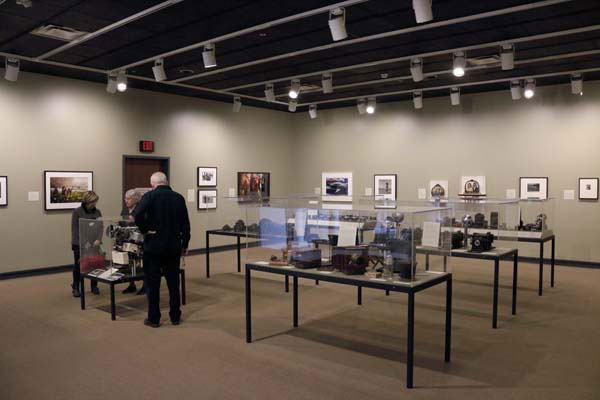 There is a room that permanently features a History of Photography exhibition. That comprises equipment and photographs and it is changed every 4 months rotating their huge collection. This time, it was quite predictable and organized in six showcases: one for daguerreotypes and collodion cameras and darkroom, another one for Graflexes, the most iconic American camera, a third for Kodak cameras, another for Canon and Nikon, representing the Japanese 35 mm industry so important for Kodak’s film business, one for Leicas and that one with people around it is a camera used by Nasa in a spacecraft. Everything with tags, dates, models, types… but no story told, no statements made. 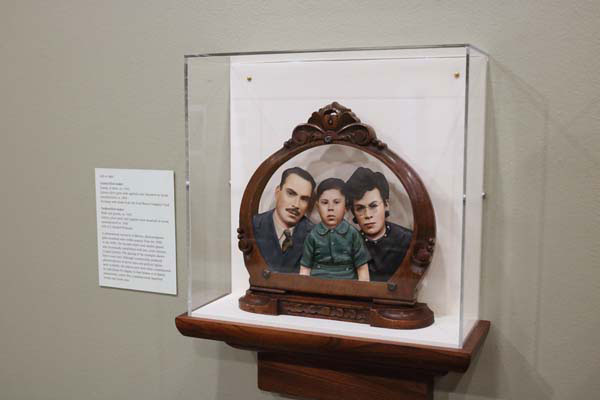 Hanging on the walls and with no connection made with the equipment on show in the same room, there were samples of printing methods and different approaches to photography featuring images for an exhibition called “Mexico and the Photographic Imagination”. Pictures with Mexican subjects but not necessarily by Mexican photographers. One thing worth noting  is that there was not any border between High Art and Low Art, famous or unknown photographers. This anonymous photo sculpture (above) and Paul Strand photos (below) were interestingly brought together. A museum like George Eastman, and others about photography, make those distinctions suddenly just not important, while in other places people fiercely fight for setting up clear territories. 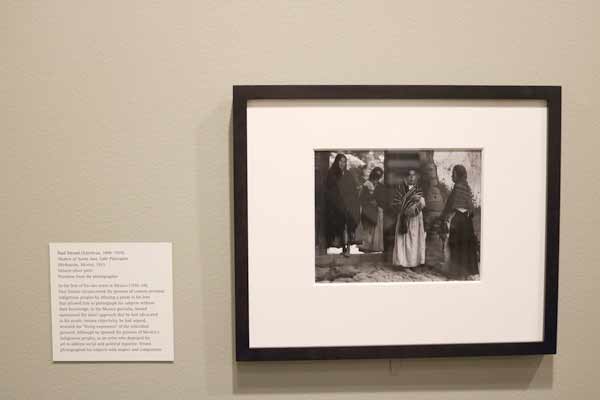 On first floor, at the house, some rooms and one corridor were turned into a gallery with an ongoing exhibition called “From the Camera Obscura to the Revolutionary Kodak”. There is a room-size camera obscura facing one of the  Gardens and aimed to illustrate the image formation principle in a camera obscura. Three showcases about the early years of photography, from daguerreotypes to dry plates… 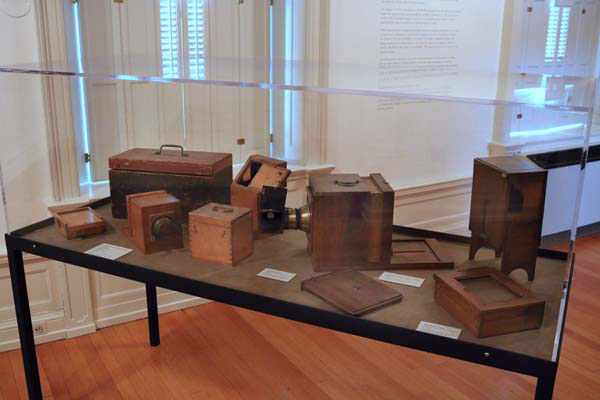 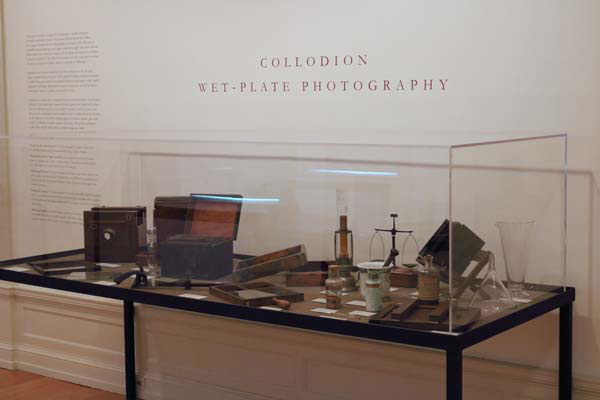 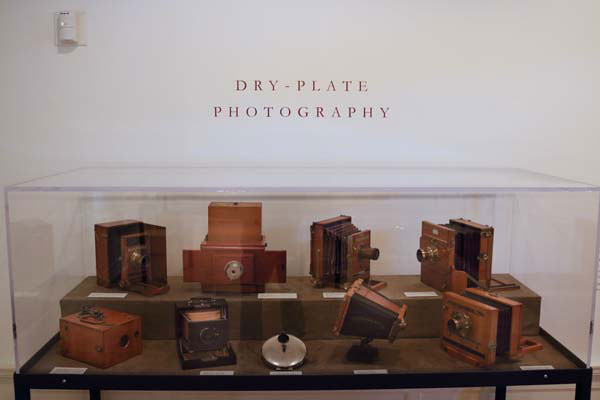 … and finally the corridor with a very instructive selection of pictures, cameras, advertising and text about the original marketing strategy set up by George Eastman in order to enlarge the consumer target by recruiting novice photographers. 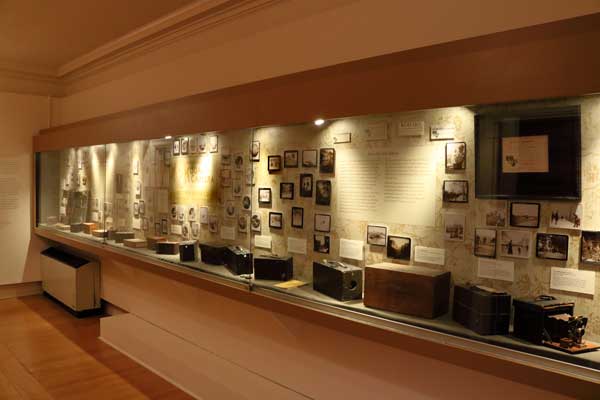 At the same floor there is one room prepared for activities with students and junior visitors. It is like a science fair where children can understand and experience how animation and motion pictures work step by step. 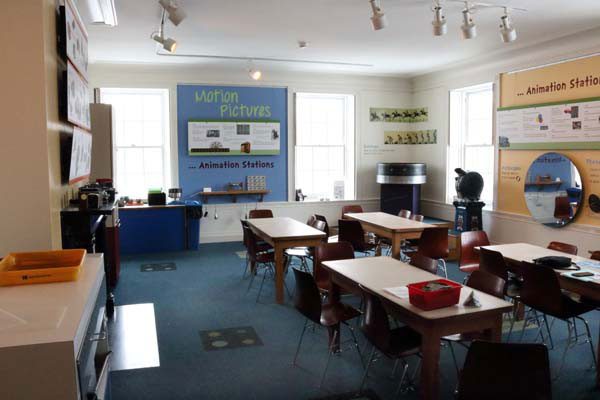 Far from being a static exhibition/collection of old stuff, like the “museum” word could suggest some decades ago, the George Eastman Museum is well tuned into new trends and works as a cultural centre and has a hectic program including contemporary photography exhibitions, film screening, talks, workshops about alternative processes, film conservation and more.

That is great for people living nearby and being able to follow up so many interesting activities. The day I visited there was a solo show from Richard Renaldi, at the Project Gallery, another museum’s space. Renaldi is a photographer from Chicago, and the Exhibition was called Manhatan Sunday . 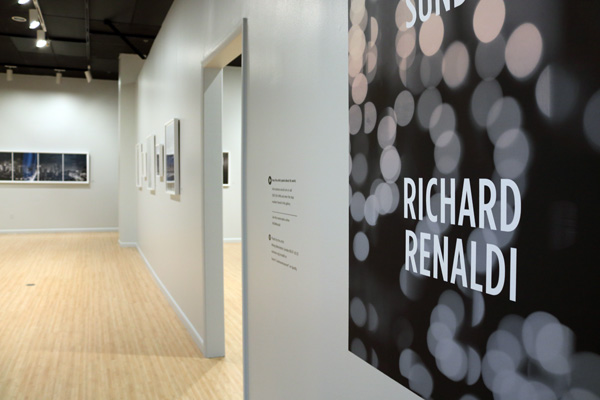 It was about that time when night ends for some people and day starts for others. Richard captured that transition atmosphere in a series of portraits and some urban landscapes. Nice work in black and white. 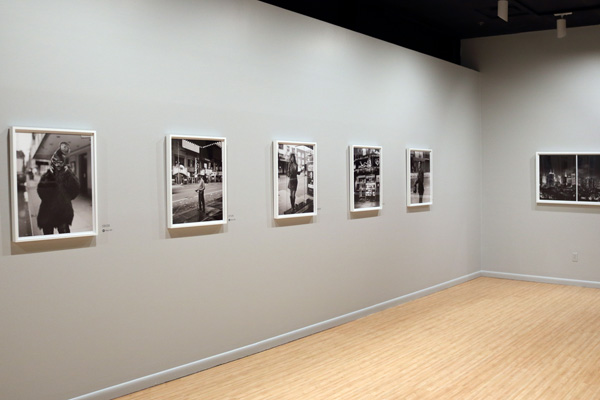 Finally, the galleries and house are inviting for wandering about and exploring. Some installations are interesting for aesthetic and informative fruition, like this big wall, a collection of dyes used in the development color film emulsion. There is a sympathetic coffee shop where you can have a light meal. The bookstore is rather small. The gifts-shop is plenty of gadgets that will certainly please the souvenirs fans. 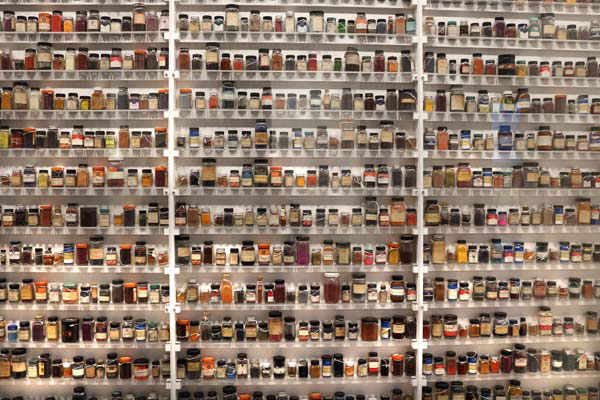 If you are a one time visitor, I think the best best thing you can do at George Eastman Museum is, in case you have a research project, a specific area of interest or something alike, plan your visit well in advance, do a previous research in their database, let them know what you are in search of, ask help, and then take time to dive into their rich collections of photographs, equipment, books, documents, etc. Combining that with a workshop of your interest would make it all even better. The museum itself is very interesting, nice and instructive visiting. But the hidden part is for sure their very best. 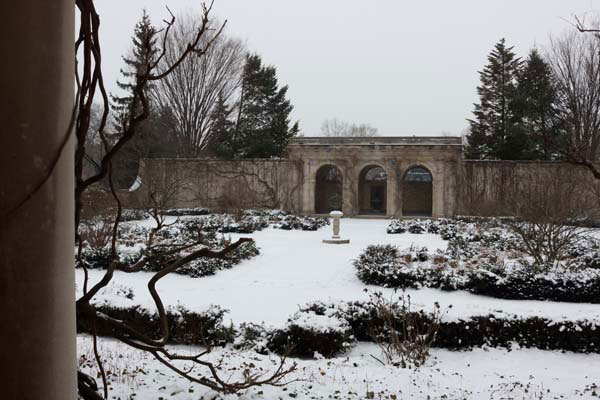