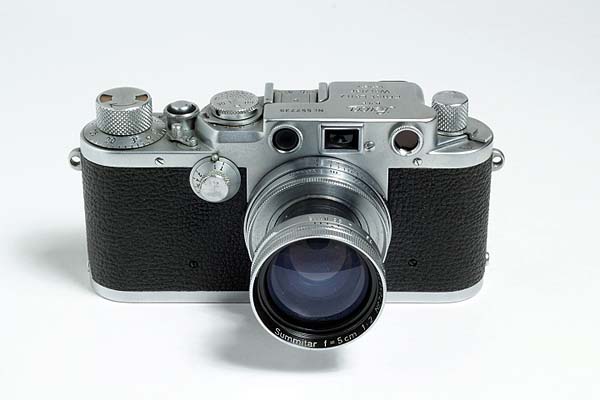 Leica IIIf is one of the latest models, the penultimate in fact, of a line and a design that began in 1913, designed by Oskar Barnack, and commercially launched in 1924 by Ernst Leitz Optische Werke in Wetzlar, Germany. After the Leica IIIg came the M line with bayonet lenses and a complete redesign. The Leicas used the 135 film, originally made for cinema, and instead of 18 x 24 mm format, typical of when the film is transported vertically like in movie cameras and projectors, Oskar Barnack designed his camera for 18 x 36 mm frames, with the film transported horizontally.

The basic idea of the photograph in 135 film was to use the negative for enlargements. This was at a time when much of the prints were made by contact with  negative plates measuring 9 x 12, 13 x 18 cm and larger. The 120 film was also gaining popularity, first with box cameras cameras and later with folding cameras, and was suitable for both: contact print or enlargements.

A contact print requires less of a camera lens as in this process the negative will not have its shortcomings enlarged . In the case of images on film 135, the sharpness expected for a negative that will be enlarged,  easily 10 times, rises the required lens quality too a next level. This forced the Ernst Leitz to design and launch special lenses for the new line of cameras, because he aimed to position it in the premium segment, for demanding photographers. There came lenses as Summar, Summarex, Summarit, Elmar, among others, that surprised by the quality they delivered in the final copy. 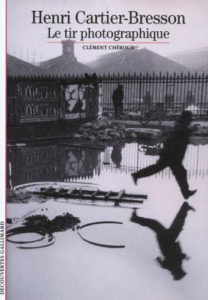 The Leicas are closely linked to the emergency of street photography, spontaneity, the capturing at the decisive moment. Very famous photos as the one on the cover of the book written by Clément Chéroux, about Henri Cartier Bresson, embody precisely that spirit that would be difficult to express with a large format camera, due to the complexity of operation, and also with a box camera , due to the lack of optical quality.

Leicas and folding cameras like the Retinas, from Kodak, or the TLR Rolleiflex, were important steps in this direction of the camera as an extension of a restless look, a look that was already zapping quickly, no longer contemplative as it was in the first generations of photography. It can be said that at first we were seeing to shoot and with the introduction of compact cameras, faster and better quality it was possible to reverse the formula and from then on we started shooting to see. The photo of Cartier Bresson on the left side is a perfect example of this inversion. 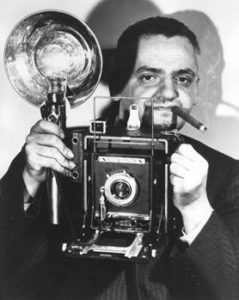 The Leicas were decisive in providing means and standards for this new conception of photography to become fully established. We have to admire photographers like Weegee, born in Ukraine, immigrated to the United States where he worked as a photojournalist in the 30s and 40s (photo on the left, source Wikipedia). We have to admire him not only for his work in itself, by his many images, so raw, about life in Manhattan streets, but also by his ability to use a Speed Graphic 4×5″ like a point and shoot. We may see that as an exemplary case of perseverance and adaptability of humans beings.

But even with the concept of 35 mm rangefinder, brought to perfection by Leicas, when we reach the end of the 1950s and early 1960s, this would give way to an old idea that had been updated, miniaturized, also using 135 film in frames of 24 x 36 mm, and took the lead in the gesture and way to capture the moment. It was the boom of SLRs, Europeans first, like Exakta and Contaflex, and right after the Japaneses. The image seen through the lens that takes the picture, the small size of the camera and automatic exposure with more powerful built in light-meters, made cameras like the Nikon F the standard equipment for photojournalism. Brands like Canon, Olympus, Pentax, Minolta, were the winners of professionals and also the most dedicated amateurs.

The new generation of Leicas, the M type, resilient in the concept of rangefinder cameras, followed in a position of honor in the photographic scene, very much used and respected by great masters, but the single lens reflex concept proved to be the best adapted to the new photographer emerging as we enter the 1970s . 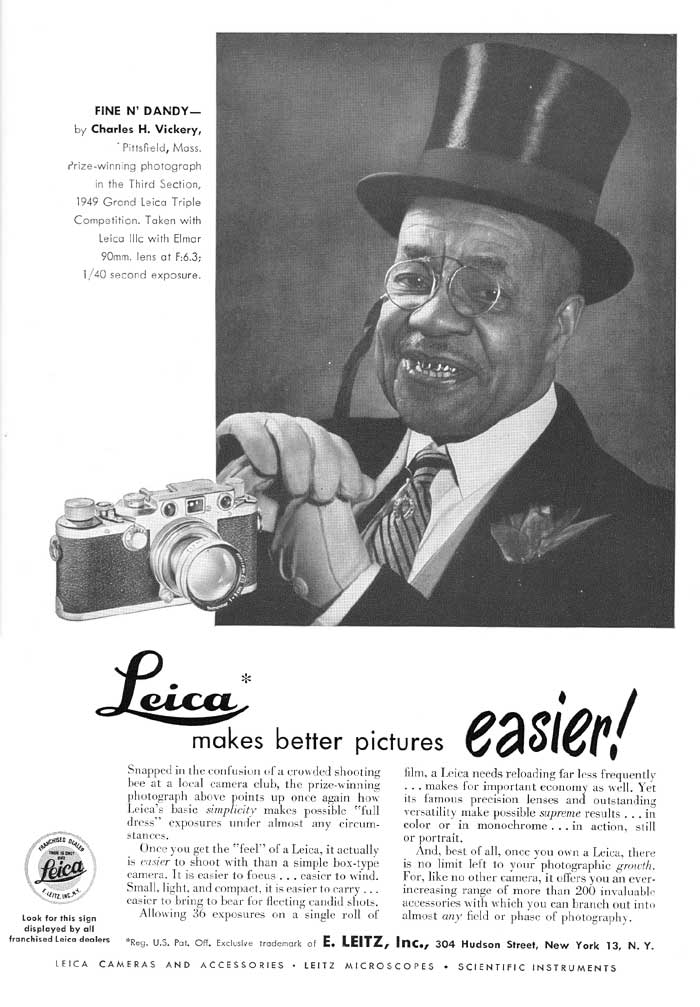 The strengths that Leica advertising  promoted were the easiness of use, the ability to make 36 shots without reloading, the quality of their lenses and beyond all of that, it was created an aura about the “feeling” of having the camera in your hands. And it really feels good indeed, firm and cozy, precious, almost hidden between two hands. 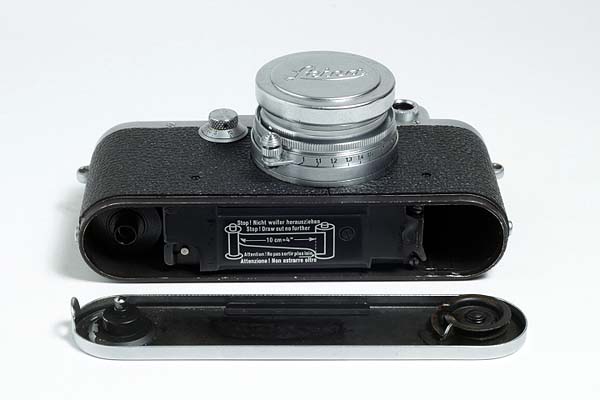 Regarding ease of film loading, that is something that I think as a weak point compared to the back door in the contemporary Kodak Retina, for example. But experts say that the engineers of Ernst Leitz Optische Werke had much concern in keeping the film in the exact position, critical to the correct focus, and argued that a fixed rear was a better configuration to ensure this condition. 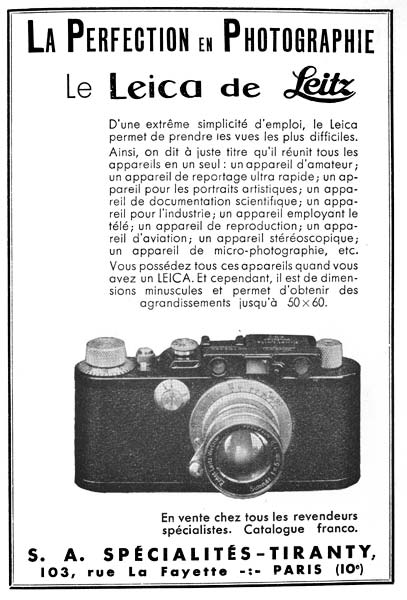 Above, an ad from a shop in Paris. It highlights again the ease of use and the diversity of situations in which the Leica showed its superiority: “So we can certainly say that it comprises all cameras in one: an amateur camera, an ultra fast report camera, a camera for artistic portraits, for scientific documentation, a camera for industry, a camera using telephoto lenses, a reproduction camera, an aviation camera, a stereoscopic camera, an camera for macro photography, etc. “. Stresses finally that you can enlarge your negatives up to  50 x 60 cm. 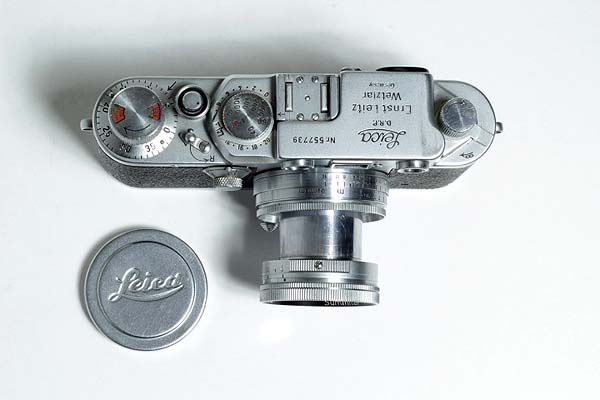 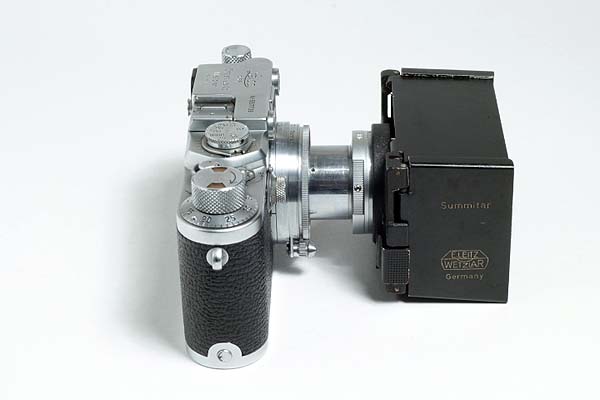 The versatility of the Leica “system”, mentioned in the French advertising, was supported by an extensive range of accessories, over 200 items that could be fitted to the camera and its lenses. Even a simple lens shade (above), had to be something with style, different from norm,  in order to take the Leitz-Wetzlar logo. Below an lens shade adjustable according to the lens foci. 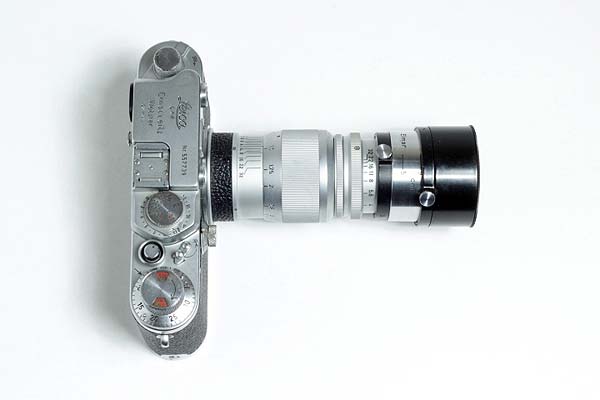 Much of the deserved reputation of Leicas comes from a special care for quality. Have you purchased any camera that came with a quality inspection card with the signature, by hand, of four plant engineers?

Leitz had a philosophy of precision, cleanliness and organization that could not only be found in the final product. The entire production process was designed so that its  employees had an attitude in line with the legend that the brand created around itself. Photos of the factories showing their dressed, thoughtful, proud personnel were used extensively in the advertising of the equipment. 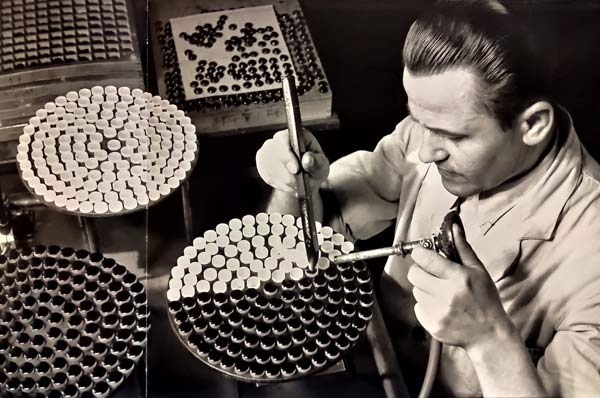 Lenses receive a layer of tar for fixation in the polishing process. 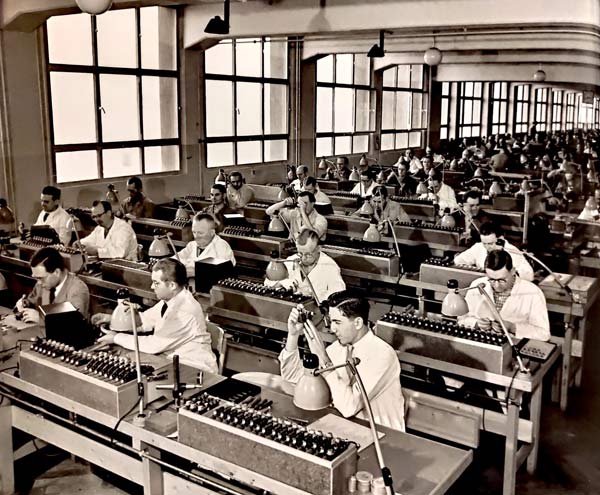 Below the Leica IIIf with an objective Elmar 90mm f4. In this situation it needs an extra viewfinder to match the new focal length. If your subject is near, it is also necessary to adjust the distance on the viewfinder by turning a ring, that is to prevent parallax error. I believe that the SLR system, which always sends to the viewfinder what any objective is actually “seeing”, has a great appeal and was responsible for the virtual abandonment of rangefinder cameras in hi-end photography. The freedom provided by interchangeable lenses seemed very obvious as an unbeatable advantage. To what extent this versatility is actually used and even make a difference, if the criterion is only to make good pictures, it is very questionable. Many photographers love the idea that they will be ready for any situation and buy everything that appears in the market aiming to meet this condition that never comes. But very surprisingly good results may also be reached when the effort goes towards making the best possible use of just what one has. 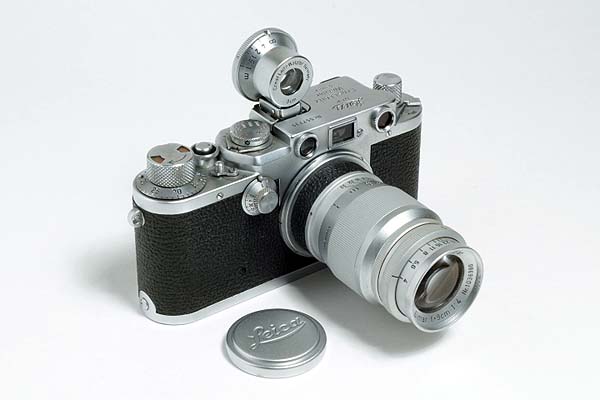 Some pictures made with the Leica IIIf featured in this post: 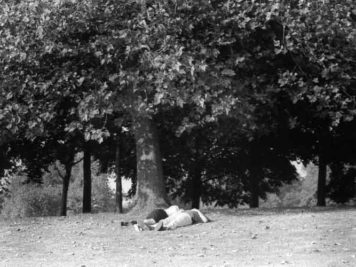 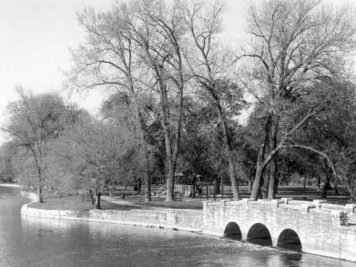 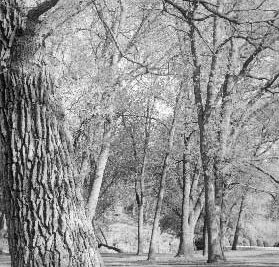 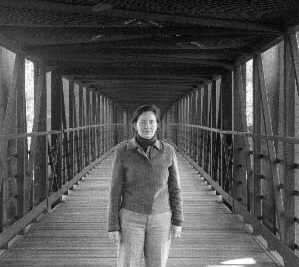 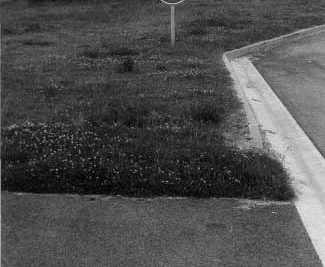 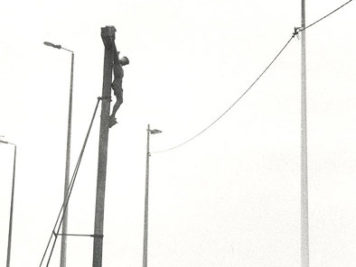 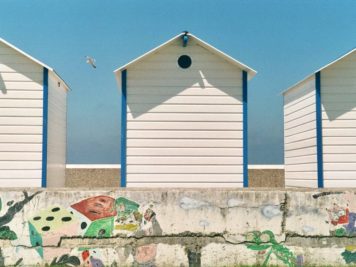 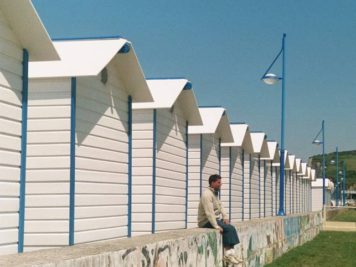 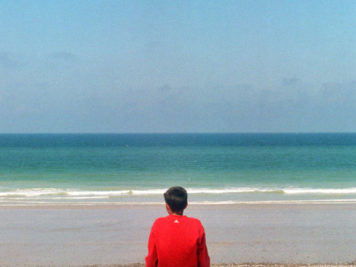 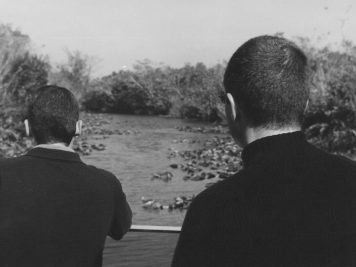 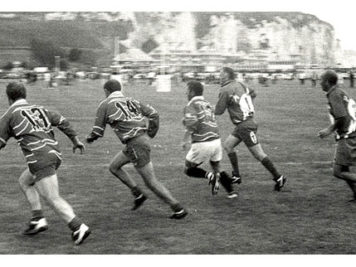 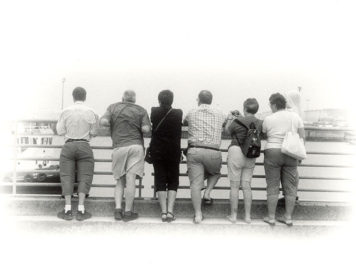 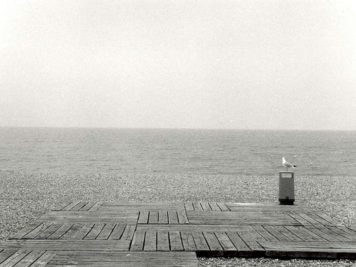 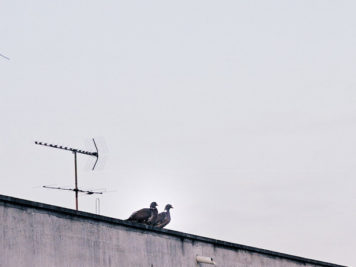 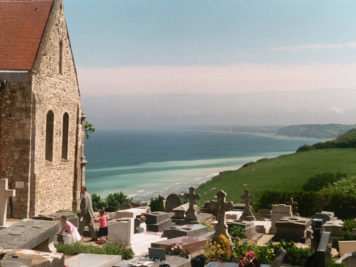 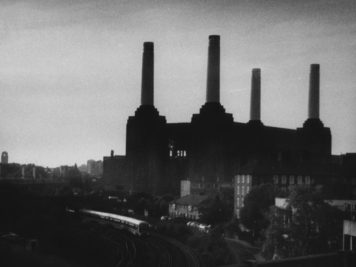 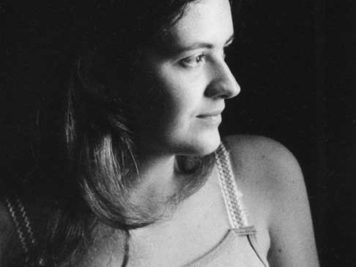 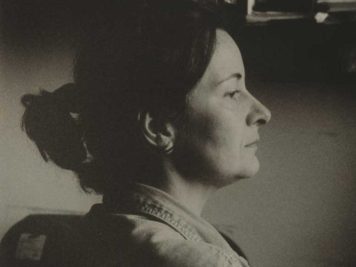