Using a Petzval lens for potraits

Petzval’s lens for portraits, as well as any lens that is not well corrected for optical aberrations, produces an image that has its best quality in the center, near lens’ axis, and degrades as we move away from that center . This is the case for all lenses prior to about 1890, which was when anastigmatic lenses were invented.

It is necessary not to confuse the blurred background in the portraits, produced by the effect of depth of field and that is present in all lenses, with the blurred due to aberrations such as spherical, coma and astigmatism.

The question to consider with a Petzval becomes important when the pictured is not in the center of the photograph. Assuming, of course, that you want a sharp image for your sitter’s face. We are accustomed to focusing, with modern cameras / lenses, anywhere in the frame. Digital cameras allow focus areas at many points in the photo, even far from the center. With a Petzval, or another uncorrected lens, we can focus something out of the center, but it will not do much good, because aberrations will always compromise the sharpness of the image in those regions farther from the axis of the lens.

With small and medium-format cameras, digital or analog, the only remedy is to keep what you want sharp in the center of the image and crop it afterwards. With large-format cameras, where it is usually possible to decentralize the lens relative to the film, we can move the zone of best focus to points farther from the center. This is what we will see in this article. 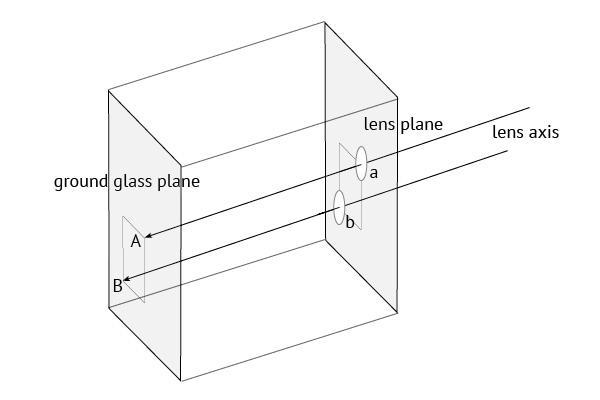 In the above schematic camera we can clearly see the problem to be solved. If what you want in focus is in ‘A’, right in the center of the film or sensor, the lens stays in its normal position in ‘a’. The optical axis of the lens passes through these two points at a right angle to the plane of the lens and to the plane of ground glass.

However, if the point in the picture where we want the maximum sharpness is in ‘B’, typical situation of a half-body portrait, then we have to adjust the camera so that the lens is as ‘b’. In this way its optical axis continues passing orthogonally by the plane of the image at the point where we want it in its best quality. 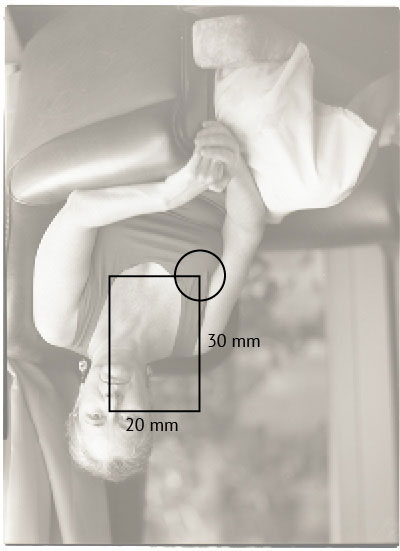 Above we have a simulation of a ground glass in which the face in the picture is 30 mm below and 20 mm to the left of the center.

Each large format camera has more or less options of movements according to its characteristics. Some allow you to adjust angles and this greatly facilitates the task of moving the optical axis to the new point in the ground glass. The ideal case would simply be to lower and shift it to the left by about ¼ of the height and width of the frame, respectively. But this is rarely possible in a large format camera. When we need more drastic movements, we must resort to tilts, not just shifts.

To illustrate the reasoning I will show how I adjusted a Linhof Technika 13×18 cm with back to 9 x 12 cm. The procedure can be adapted for a good number of other cameras.

The solution will be to use lateral shift to give the 20 mm to the left and inclination of the lens board and film, to give the 30 mm down. 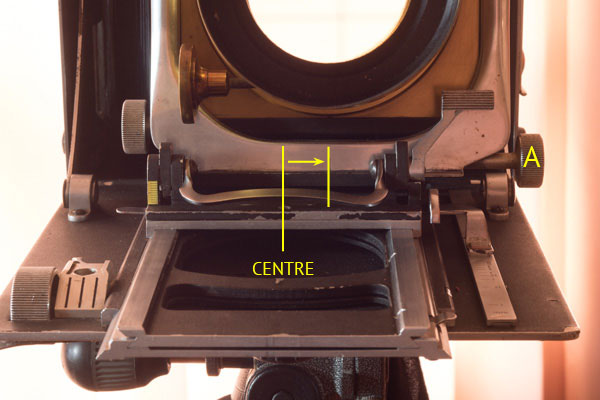 The lateral displacement is basic. In Linhof Technika, simply turn the knob marked ‘A’ and the lens board slides to one side or the other approx. 20 mm. In the photo above we see how the center of the lens has moved relative to the center of rails. 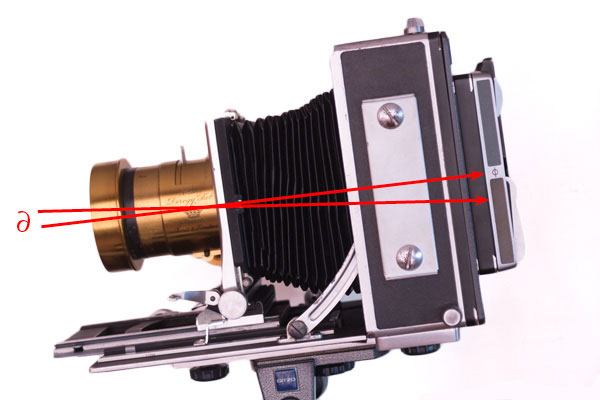 Vertical movement is more complicated because tilting was used. In the picture above everything happens as if we wanted the axis of the lens to rotate from an angle δ (lowercase Greek letter) to reach not the center, but a point 30 mm below it, on the film. The problem is that by doing that, we lose the orthogonality of the lens axis with the film. It may even result in something interesting but there will be change in focus and relative size of things. The idea was to restore the orthogonality by throwing backwards the lens board, and film back, as shown in the picture below. 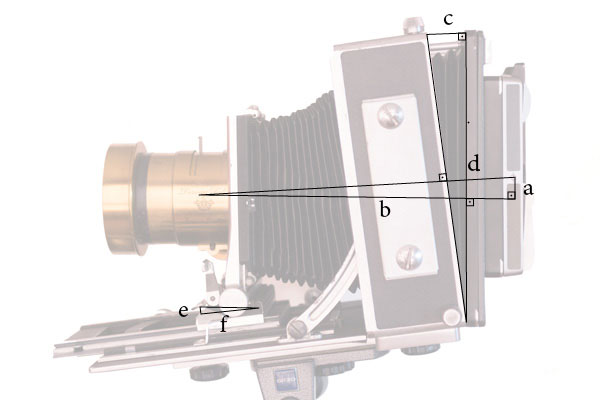 The angle δ that the lens rotates produces several similar triangles, and we can then use the fact that:

It seems complicated but it is not: The measure ‘a’ is simply how much we want the center to go down: 30 mm in our example. The measure ‘b’ is given by the simple lens formula. We need the focal length of the lens, represented by f, and the approximate distance from lens to the focused object, represented by p. The formula that gives the distance ‘b’ (from the optical center of the lens to the image) is as follows:

The distance from the lens to the photographed object can be measured with a standard tape or more easily with a laser tape.

Since we have ‘a’ and ‘b’, we can obtain the two measures that we will adjust in the camera for the lens board and for the film: the measures ‘c’ and ‘e’: 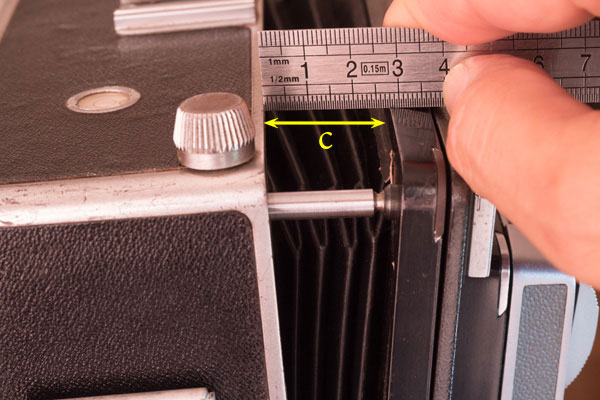 This is measure ‘c’ which, in Linhof Technika, was easy to locate it in the gap shown in the photo. What is important is that the measure ‘d’ forms a triangle with it. We can be sure that in this way the film was rotated by the angle δ, as we wanted. 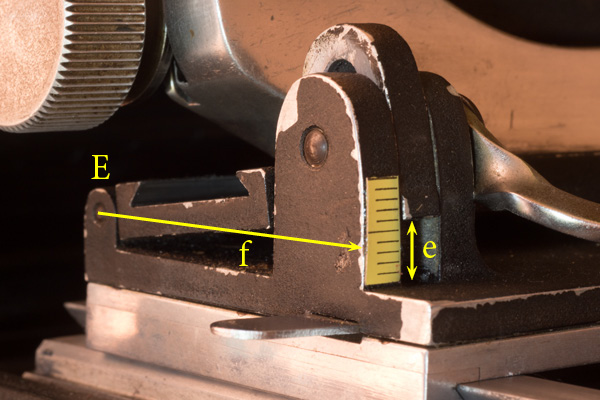 For measurements ‘e’ and ‘f’ you must find elements in your camera that tilt the lens board. In Linhof Technika it rotates on the ‘E’ axis in the photo above and I found a very convenient place to measure the distance  by fixing a piece of millimetre scale in a gap that opens when the lens board tilts back . Again, the important thing is that ‘e’ and ‘f’ form a triangle with the larger sides orthogonal to the original plane and the new plane of the lens board. In this way it will rotate exactly from the desired angle δ. 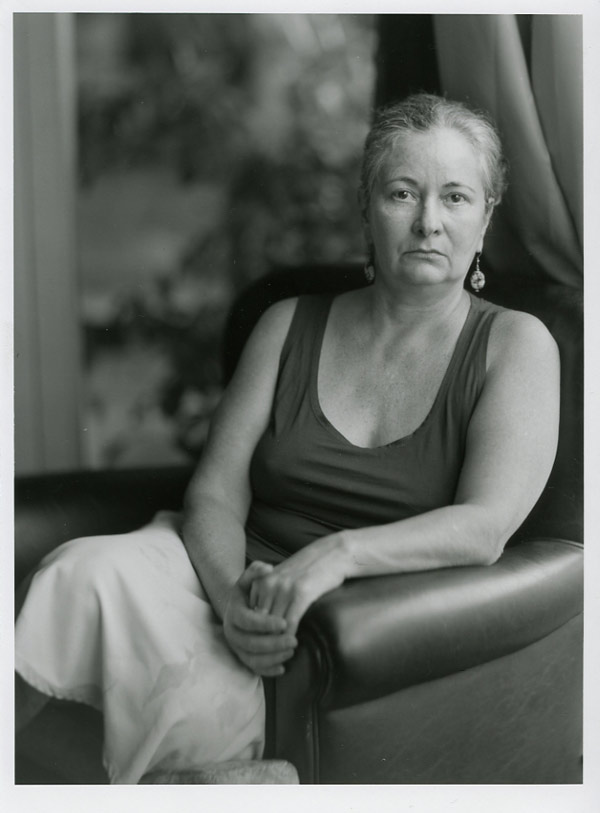 This is a portrait made with a French lens, Rapide # 4 by Derogy, Petzval type, with focal length 223 mm and aperture f / 3.6. I used Ilford FP4 film in 9 × 12 cm format. It was developed in Pyrocat HD, in tray, for 16 minutes at 20°C. The image above is a scan of a print made in Ilford Fiber Glossy, size 18 x 24 cm. A Waterhouse type diaphragm was used to reduce to f/4 only to avoid a ring of oxidized balm present at the edges of the lens.

Two shots were made. In the first the optical axis of the lens passed orthogonally through the center of the film and in the second through sitter’s face, following the procedure described above. It is remarkable how the aberration reduces the quality of the image, although it is focused. Below, I show two scans made directly from the negatives. They illustrate this effect, since everything else remained exactly the same:

This image was perfectly focused through a magnifying glass. The loss of sharpness is due exclusively to aberrations that are accentual at points far from the center.

In this case we have not only the focus, but also the absence of sharp aberrations adding to  image’s quality.

The above calculations may seem laborious but for each camera need to be done only once and then, with each photo, we must measure how much we want to decentralize the image and the distance of the lens to the point of focus in the object. After this, three simple formulas for ‘b’, ‘c’ and ‘f’ are calculated and the camera is set accordingly.

Rotating lens and film on both vertical and horizontal axes would be much more complicated and so I’m assuming that sliding is used for horizontal displacement.

It is also possible to do all this without calculations, guess work, what is important is to have the concept present and observe the final result to develop an intuition of how much is sufficient as the case.

For a detailed description of the optics and history of the Petzval design read the article: The Petzval’s portrait lens