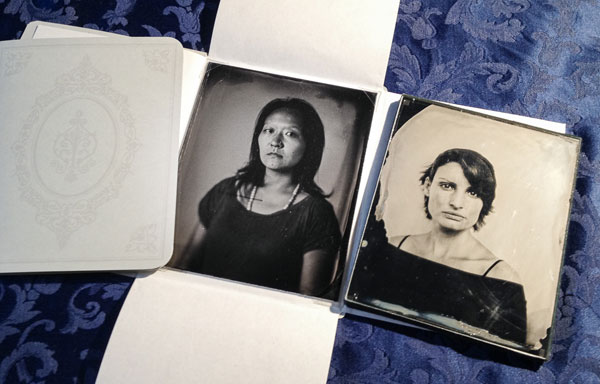 I had today the opportunity to see at the Sao Paulo city library, Mario de Andrade, wet plate photography done by Roger Sassaki. Portraits in Ferrotypes and Ambrotypes were in the menu for those visiting the “Festival Zum 5 Years”, organised by the photography magazine  Zum, featuring lectures, book sales and workshops. All ingredients of this technique, so suitable for the itinerant photographer, were present. Great deal of flexibility is required to fit into different environments, the event itself, the people who want to know, ask, talk and fiddle about assuming a sort of science or fun fair atmosphere. But behind all those turbulences, the direct imaging process (without negative or raw file) requires a rigid protocol, discipline along several steps where only good preparation and practice are reliable means to guarantee results.

Just a few historical and technical references: The basis for processes so called wet plate is a liquid named collodion that forms a convenient support to adequately receive light sensitive silver salts. The “wet” comes from the fact that the picture must be exposed and the plate processed while still wet. That is why the photographer must have his darkroom near by. Many things about the first decades of photography are controversial and disputed in regards to pioneering and authorship. But Josef Maria Eder (1855-1944), german, respected historian and, at the same time, chemist specialised in photography, assigned to Frederick Scott Archer ( 1813-1857) the prowess of having produced the very first collodion plate in 1850 (History of Photography – pg 345). That means approximately twenty years after Daguerre and Talbot having announced their cornerstones techniques. The Talbotype, using waxed paper negatives, would still become the future of photography, thanks also to development of emulsions largely owing to Archer’s collodion. But the Daguerreotype, completely different from all, was practically abandoned when the wet plate came about. It quickly gained a large majority in people’s preferences as an imaging recording method.

Collodion offered a combination of details as good as Daguerreotypes and was reproducibly as Talbotypes. No matter how transparent the wax treatment could make special papers, there was no way to get rid of fibbers being printed, sort of texture, and those are completely absent in glass. More than that, two processes for a direct positive image were developed: the Ambrotype and Tintype or Ferrotype. Those are the very processes that Roger Sassaki has used along with the original collodion, this one, as mentioned before, intended for negatives. We read still in Eder that the first enamelled plate over which the collodion process was applied (Ferrotype), rendering a positive image, was an accomplishment of Laurent Millet em 1854 (ibid. – pg 347). The historian observes yet that Le Gray (France), the famous photographer, also had a dispute with Millet about the same invention. From his researches Sassaki highlights other names that took part in those developments and some that also claimed to be the real pioneer: James Cutting (USA), Hamilton L. Smith (USA), Adolphe-Alexander Martin (France) e Victor Griswold (USA). To know who was the very first becomes an impossible task. But what is interesting it to observe the effervescence brought by the topic of photography and also see how the photographers themselves were so deeply involved in research and development.

As for the new collodion applications for direct positives, the final result is similar to Daguerreotypes in size an finish, and it has yet the advantage of avoiding that sensation that we are never looking at it from the right angle. The reason is that the Daguerreotypes requires, for better viewing experience, that its silver polished surface reflects a dark background (behind the viewer), while for Ferrotypes or Ambrotypes, the black surface is conveniently right behind the emulsion and whatever angle you look at it, the resulting image is the same.

Enough for history. Notwithstanding the fact that it is interesting to investigate and to know this image making genealogy, as that helps us to understand our all complex relation to images, what Sassaki and so many other photographers around the world are doing shouldn’t, from my point of view, be regarded as curiosity, homage or rescuing of a forgotten past. It suffices to see the process while is carried on, to presence the magic being enacted, to perceive that it makes all the sense in our own time. Important to highlight that the logic it has today, could not be more far away from our ancestor’s motivations at the beginning of photography. It is just a technology being revisited, not at all a desire to go back in time or keeping the past alive. The wet plate brought, in those former times, easiness and performance that were very much sought after. Today we have excessive easiness and performance with digital, so the wet plate process appeals as a very welcome technique exactly because it is fairly  troublesome – hence, exactly the opposite situation. Ironically, that difficulty has become attractive as it waves as a purgatory practice, a quiet rebellion against the evil technologies, global corporations, consumerism, immediacy, virtuality and other contemporary witches. 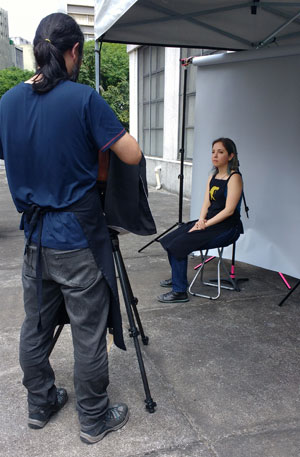 The open air studio was set aiming at half body portraits. Like in bygone days, there was a headrest, for the collodion demands exposures that can easily reach to seconds. Sassaki normally stays between 1 to 4 seconds and f4 to f8 aperture. But it is worth to mention that the Ferrotype, as a direct process, that will not need a second step like contact printing or enlargement, can do with a far thinner image density than glass collodion intended for reproduction. A subtle silver layer is enough to yield a good tonal range going from the deep black background to a pale brown over the more exposed (dense) areas. For this reason the Ferrotype demands less exposure than the original collodion process. Anyway, the headrest was there also as a reference for the sitter stay in focus, as the depth of field is really narrow.

Format was 4 x 5 inches (10,2 x 12,7cm), a good size for an image to be seen with more intimacy, holding it in our hands. The camera was of a type that became popular during the XIX century, among dedicated amateurs and professional photographers, called field camera. It belongs to a broader category of view cameras and that means with ground glass for framing and focusing. Field cameras were light and designed exactly for external photos. Although it may seem to us rather cumbersome it was in fact the companion of tourist photographers. It demanded tripod, glass plates, portable darkroom… at least something from 20 to 30 Kg (44 to 66 pounds) equipment for the smaller formats like postcards. 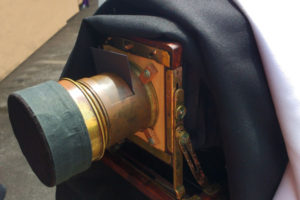 Lens was a Derogy, French, Petzval type. Probably produced around 1870.  As a shutter, Sassaki was using a lens cap and a wristwatch. The diaphragm was Waterhouse type, but instead of an original blade a carton board was in place. The morning was hot and sunny and certainly a fully opened Petzval would have required a quicker and more precise shutter. 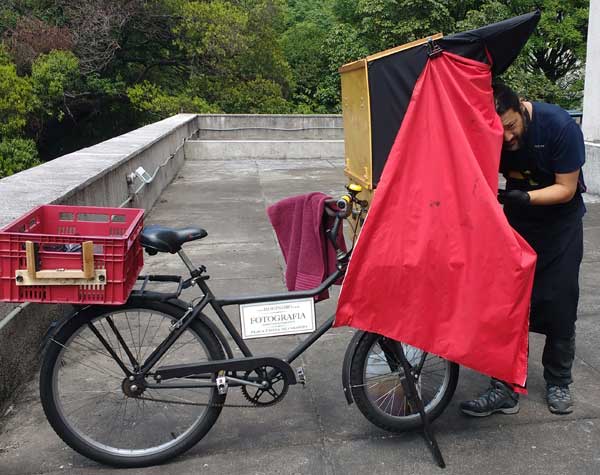 The wet plate collodion bicycle is a darkroom conveniently mounted over a bike, one of those used by delivery boys, having in front a small bench covered by a black cloth that was not really light proof. But this problem was in fact a solution to another one: the passing light was then filtered by a second cloth layer, this time deep red, that offered the proper lighting for the process as the emulsion is not sensitive to that color. That curtain can be closed in a way to have the photographer inside his darkroom. The temperature control, so essential in a film darkroom, in this case is totally a matter of chance. It should be something about 30°C (86°F) externally and certainly some degrees on top inside. The key variables left to the photographer to comply with such an extreme situation is shortening the time to perform chemical processes that will run much faster, or, change chemicals concentration and make than weaker or stronger depending on the case. 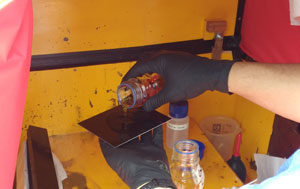 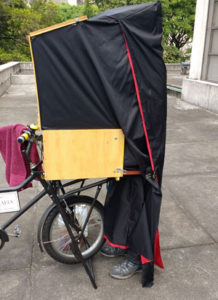 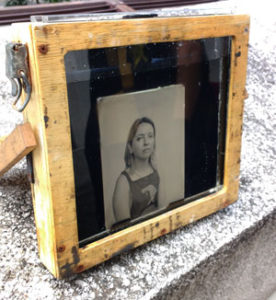 Simone Wicca, who is also a researcher and teacher in antique image making processes, posed for this first picture used for purposes of calibration.

The first step for taking a picture is to cover the plate (black enamelled for the Ferrotype) with a thin layer of collodion mix. Straight away it must be soaked for 2 to 3 minutes in a silver nitrate solution and after that it will be light sensitive. The gloves are needed, among other things, because the silver nitrate stains black any organic material.

Once exposure is made, it is time to “enter” the darkroom, remove the plate from filmholder and proceed with development. Although there is a red light inside, Sassaki says that the development under inspection is not so effective as the opaque plate make it harder to evaluate density. The improvements are made rather from observation of final result and knowledge on which and how different variables affect it. Using that knowledge the photographer goes through successive minor changes in order to deliver good image quality throughout the whole session.

Fixing, that means removing sensitive material that was not exposed and developed, is already done outside and a vertical box having a window. It is amazing to follow the image building up before our eyes. After fixed, washed and dried, the plate receives a varnish for protection. Ferrotypes keep very well over time. The major problem encountered with vintage ones produced during the XIX century comes more often from the enamel than from the emulsion itself.

Beyond making portraits with the ancestral aim of recording his clients memories, Roger Sassaki also gives classes and worshops in which everybody can learn and experiment the wet plate process. It is not needed to be a professional in order to make pictures with techniques such as collodion. Historically, a great deal of important contribution to the history of image making came from amateurs, the so called weekend photographers. If you have the feeling that digital has become so banal and would like to go for something more personal, more engaging and not so disposable, maybe you should try collodion. For more information, visit the website:  http://www.imagineiro.com.br, it is in portuguese, but you can also write to contato@imagineiro.com.br.