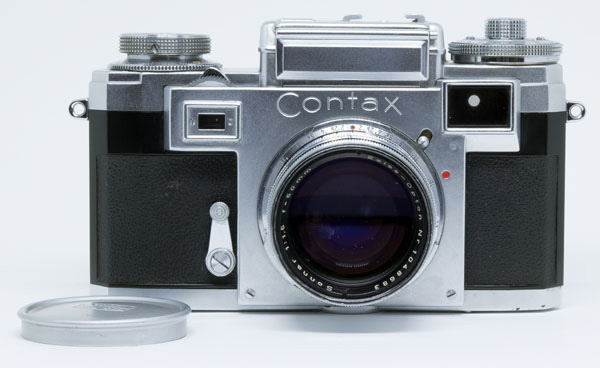 The company Zeiss Ikon AG in Dresden was the result of a series of acquisitions and mergers between many other companies involved in the production of cameras, lenses and other optical instruments in Germany. Among the most important were Ica and Ernemann, both of Dresden, Goerz of Berlin and Contessa-Nettel of Stuttgart. In 1926 this phase of consolidation gave way to the golden period that lasted until the end of the 1950s. From there the uninterrupted accumulation of losses led the giant to shut down camera production in 1972. The most obvious problem was the portfolio extremely long, which aimed to offer solutions for all types of photographers in all fields of photography. Only that, at a time when specialization and rationalization were becoming vital, it would already be too difficult a burden to bear, regardless the success of the brand.

It is important to note that Carl Zeiss from Jena, a lens manufacturer, founded in 1846 and still existing today, is another company, independent of Zeiss Ikon, which was formed in 1926 focused on manufacturing of cameras and accessories. Carl Zeiss was from the beginning a reference in the development of the optical industry and provided for many years lenses for Zeiss Ikon to equip their cameras. Zeiss Ikon was also a reference in its field and many technologies and concepts created in its laboratories would become history and set new standards in camera market. 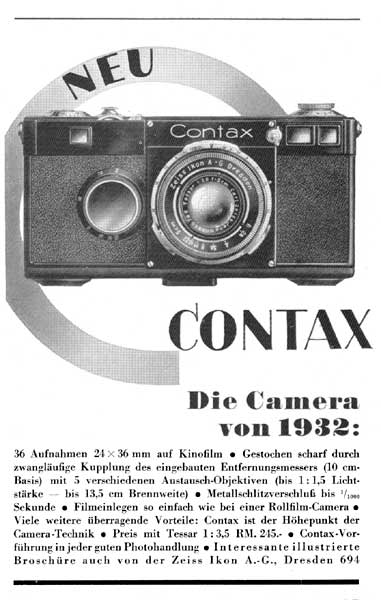 One of those jewels was Contax. It was announced in 1932 and had the challenge of competing with Leica, designed in 1914 and commercially available since 1925. Some features, such as the focal plane shutter, range finder and interchangeable lenses were mandatory to compete with the one which was already an absolute market leader. But simply copying Ernst Leitz solutions, originally a microscope maker, to someone with the weighty ancestors who formed the Zeiss Ikon, didn’t  seem a viable alternative to their engineers.

Contax was the adaptation of several technologies available among companies that formed Zeiss Ikon. The Contax name came, probably from Contessa, along with one of the main features of the new camera: its focal plane shutter that runs vertically. Such concept was already present in Contessa-Nettel’s Deckrullo camera and also in Goerz shutters. Another important point was the rapid coupling of the lens with a bayonet instead of the thread used by the Leica.

Still unlike Leica, the Contax back cover comes out completely. This was an argument used in its favor as to the swiftness and ease in film loading. It was also argued, not without reason, that the greater distance between the viewfinder and the rangefinder window provided greater precision in the camera’s focus. In addition, a telemeter coupled to the display (launched with the Contax II in 1936) was a clear advantage that Leitz would take almost 20 years to incorporate into its Leica M series in 1954.

Contax can be focused by rotating the lens or by activating the toothed disc at the top of the camera. The idea is that the index finger rests on the shutter release while with the middle finger the photographer fine-tunes focus. As in Leica, the lens locks in the infinite position, there is a click, and you have to release it to focus. This is a condition inherited perhaps from medium and large format cameras and was later abandoned in 35 mm. 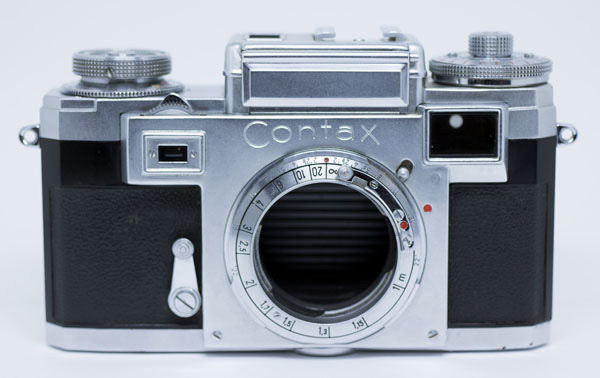 The Contax shutter is original not only by running upright, it’s all metal instead of the then usual rubbery fabric. Its construction follows a principle used in woodworking in which several slats of wood form a curtain that can be rolled up (visible in the photo above). One advantage of running on the frame’s shortest distance is that from the outset the Contax offered the speed 1/1000 while Leica made half of it reaching 1/500. In the first models the shutter dial was in front of the camera and offered 1/25 to 1/1000. However, because 35mm photography lenses were brighter, they made photography possible in darker situations, and so the low speeds, up to 1 second, were also incorporated. Contax is excellent in terms of stability when using low speeds without a tripod. Its body is not a box with mechanisms inside. Instead, the camera is a machined aluminum block with mechanisms around it. This gives it a very solid strength, which in use translates to stability.

The amount of accessories that were created for Contax is something really amazing. In addition to regular filters and lens-shades, also adapters for microscopes, macro photography, stereo photography, mono reflex adapters, tubes and bellows, flash sync, rechargeable film cartridges and, of course, a rich set of lenses and corresponding viewfinders. The lists below present what was offered before and after the Second World War. 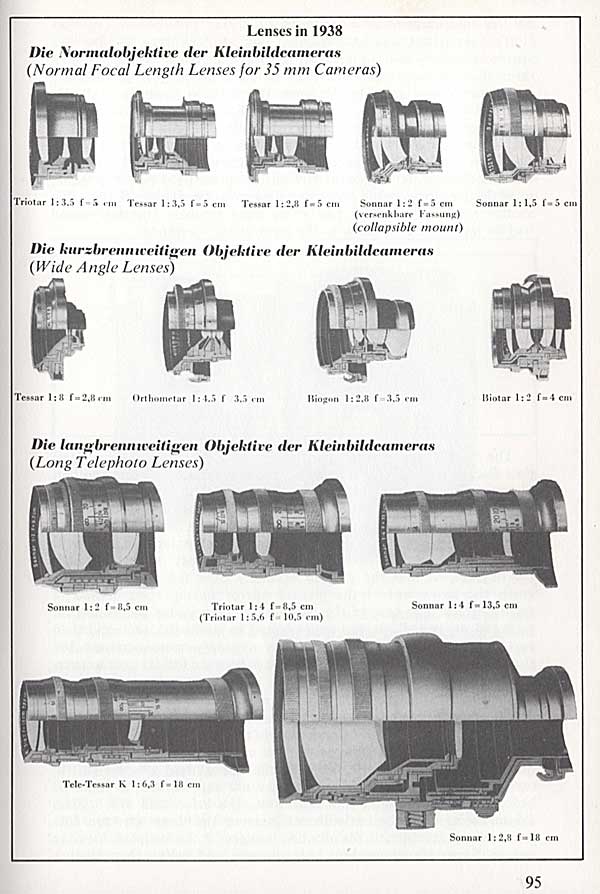 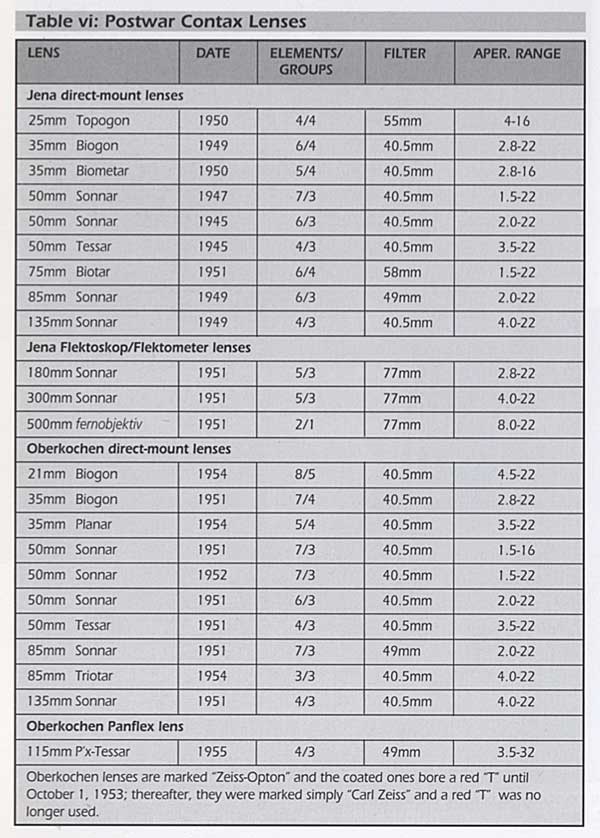 Today it seems really strange that a viewfinder camera had so many lenses available. For each focal length it was necessary to adapt a specific viewfinder. There were also adjustable viewfinders for various focal lengths. But even that, it seems awkward for such camera concept. 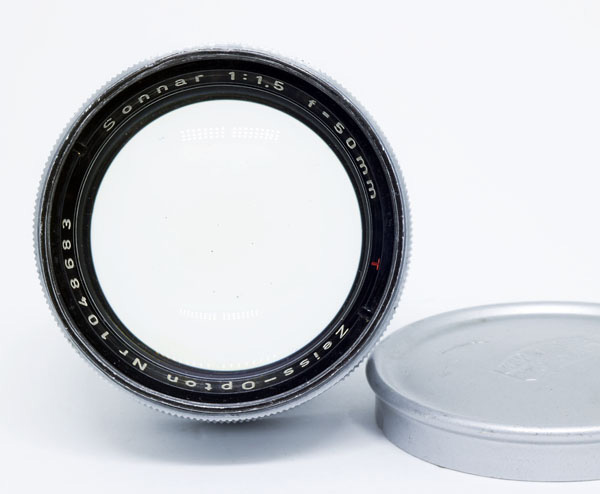 This camera specifically has a Sonnar 50mm f / 1.5, and Sonnar is a story apart. It was a development from the Cooke Triplet, an original creation by H. Dennis Taylor (1862-1943), who in 1893 proposed a simple lens, with three elements in three groups, luminous and well corrected, destined to portraits due to its small angle of view. From this first idea came many modifications and revisions. 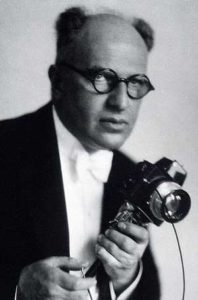 Erich Salomon with an Ermanox

In 1919 Ludwig Bertele (1900-1985), self-taught optician at Ernemann, studied this type of construction and decided to use composite lenses instead of simple lenses while maintaining the initial idea of the triplet. He developed the Ernostar f / 2 that equipped Ermanox, a camera forever linked to Erich Salomon’s candid pictures, which, thanks to the large diaphragm and improved film’s speed, managed to get good images indoors. He registered without drawing attention and using only ambient light, law courts, parties, dinners and diplomatic gatherings.

When Zeiss Ikon acquired Ernemann in 1926, Bertele continued to work, now for the new composition, and took his lens further. In 1931 he patented Sonnar f / 2 and the following year Sonnar f / 1.5 that would equip the Contax (Kingslake). A robust 7-element lens in 3 groups that has been produced at various focal lengths and formats.

Do livro A History of the Photographic Lens – Rudolf Kingslake

The descriptions below address the most distinctive features. There are examples that combine some details of one model with details of another and Zeiss Ikon itself offered transformation and upgrade services between models.

Contax I – Manufactured from launch in 1932 until 1938. It is all black camera appearing in advertisement announcing its launch in 1932 (reproduced above). It has the speed dial on the front of the camera, next to the lens, and the rangefinder is of the rotating type (as in the Super Ikonta) with independent window from  the viewfinder.

Contax II – Launched in 1936 with major modifications. The speed dial shifted to the top of the camera and the finish changed to satin metallic. Very important was the new type of telemeter (swing wedge) that was incorporated into the camera’s own viewfinder. Slow speeds were also incorporated.

Contax III – This is like the II, but with the addition of a photometer at the top of the camera.

Below, two pages of the general catalog of Zeiss Ikon, 1939, featuring the two Contax I sucessors: 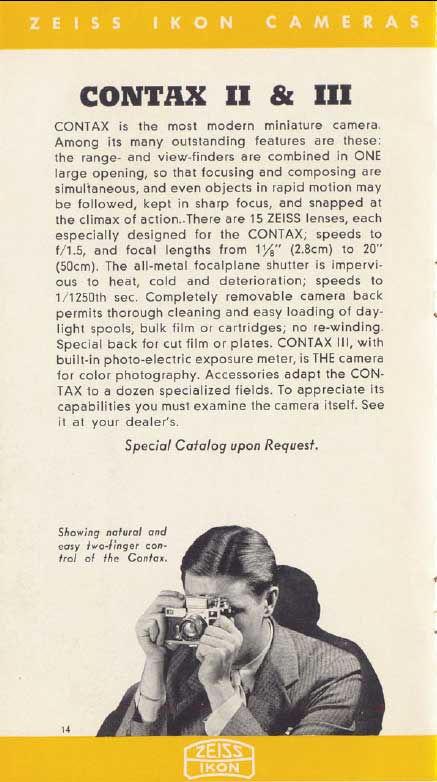 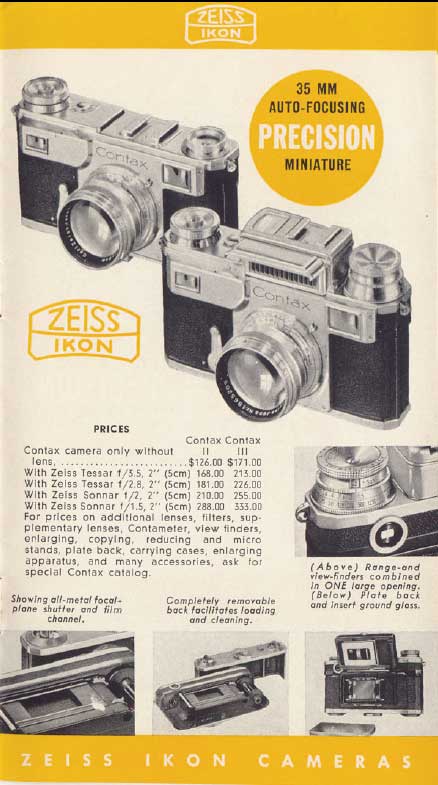 Due to the war, the destroyed factories, the division of Germany, the shortage of the post-war years and all the conditions of the international, fast and highly competitive business of photographic cameras, the simple division between models I, II and III does not account for all the particularities that are found in the copies that were actually produced. Without wishing to go into too much detail, the suffix ‘a’ as in Contax IIa or IIIa, means the addition of flash sync. There is also the issue of black or color dial. This refers, among other things that came along with, to speed inscriptions. When all are marked in black, we have a black dial. When 1/50 is in yellow, the faster ones in red and the slower ones in black, we have the color dial. This is interesting because it means an indication of date of production, the black dial was manufactured until 1954 and the color dial from that year onwards until 1962 .

As far as I’ve researched it seems there is no reliable source of correlation between serial numbers and year of manufacturing for the Zeiss Ikon cameras.

The camera that appears in this article is an Contax IIIa color dial. It is equipped with a Sonnar 50mm f / 1,5. It is therefore a kind of top of the line and was produced in the last years of Contax’s  history. 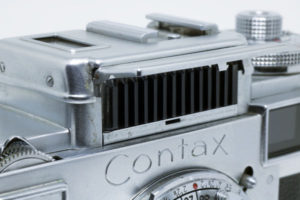 The photometer still works. It is protected by a shade that must be lifted for usage. This is an interesting feature as the selenium meters get worn out by light exposure over time. It is interesting that in the catalog shown above this is a feature that Zeiss Ikon most linked to color photography, stating that in it photometry would be more critical. This, perhaps, betrays the mistrust that photographers would find wasteful to pay 35% more just to have a photometer. In fact, we may have been a bit lazy with the automatic cameras or with coupled photometers. It is not so difficult to guess time and aperture, under most of light conditions, and still obtain acceptable results.

To adjust the photometer, one must set film speed, aim the camera to the subject, and then rotate the larger ring until center the meter’s needle. In this position, the aperture / speed pairs for this light condition can be read. 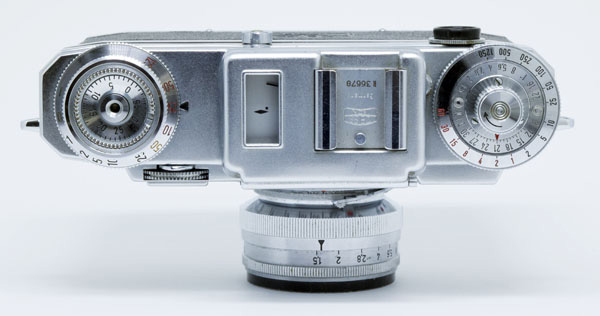 From this viewpoint, on the top of the camera, to the left, are the film advance and the speed dial. On the right are the rewinder and photometer control. The needle window is the photometer. 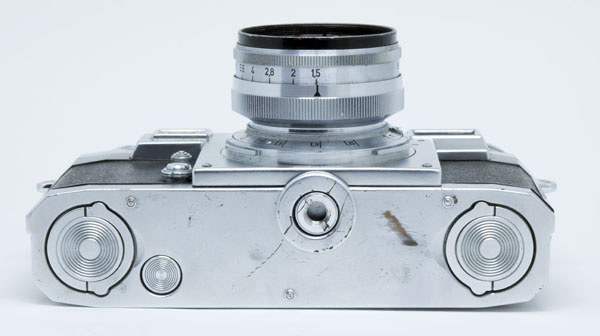 To open the camera and change the film you need to turn around each of the concealed knobs and the back comes loose from the camera body. The small button on the left side releases film for rewinding.

Some pictures taken with this Contax IIIa 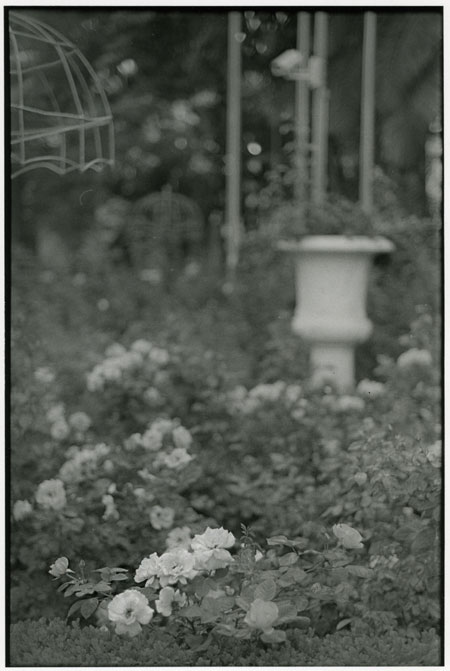 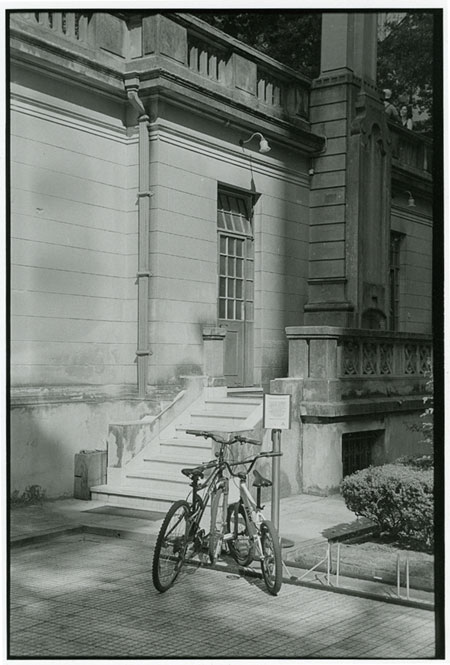 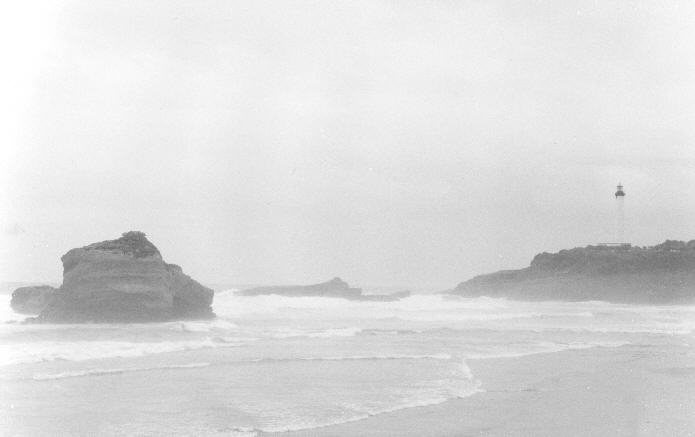