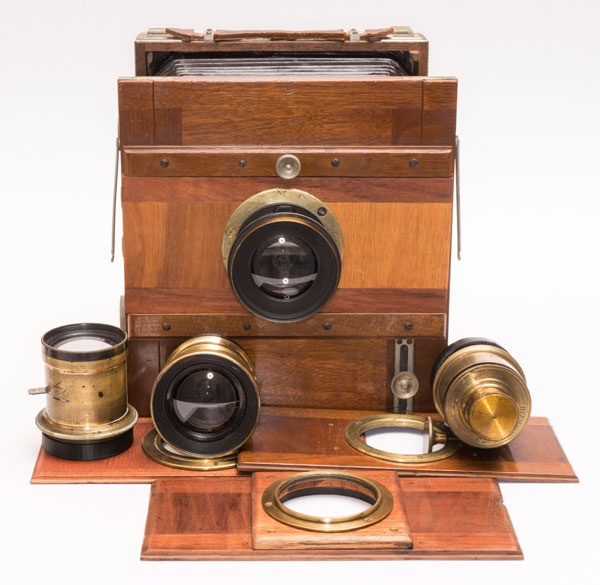 This is a great example of a category of cameras that was very important in the history of photography. It is a combination of features that has been used by a huge number of manufacturers. It was kind of generic among the half-plate cameras and many of them didn’t even have a brand. This one from the collection, in particular, escapes this anonymity as it is an Excelsior manufactured by ICA. The ICA was one of the big four, among Contessa-Nettel, Ernemann and Goerz, which merged to form the giant Zeiss Ikon in 1926. But it was itself the result of a previous merger, in 1909, of Hüttig AG in Dresden, Kamerawerk Dr. Krügener in Frankfurt/M, Wünsche AG in Reick and Carl Zeiss Palmos AG in Jena. The ICA name comes from Inernationale Camera A.G. and was located in Dresden.

The main attributes of this category of cameras are:

All this combined made this camera concept an ideal type for professionals and more dedicated amateurs alike. Field cameras practically started together with photography when they established themselves as the lightweight version of studio cameras that were practically impossible to transport. They were the ones who began “documenting the world” and were usually sold in complete sets to the traveling photographer. Such kits included not only the camera and its lenses but all the apparatus for developing the plates and later printing them on paper. 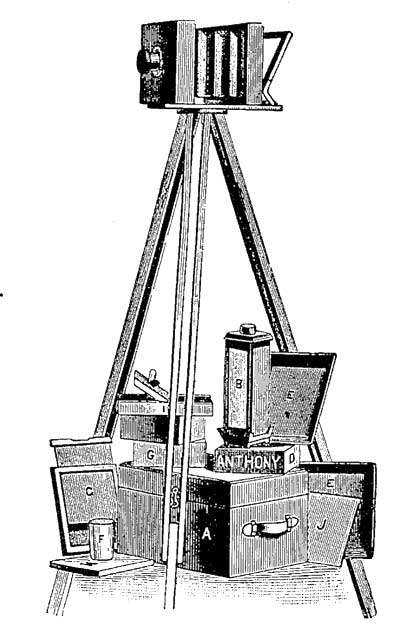 This is one of those kits advertised by the American distributor, Anthony, in his 1891 catalogue. This type of camera never completely left the scene, but after World War II the large format itself became something very specialized and the few brands that kept offering field cameras were no longer oriented to a very wide audience. Brands like Deardorff, Gandolfi, Wista or Shen Hao, are more precision instruments aimed at a very selective audience. 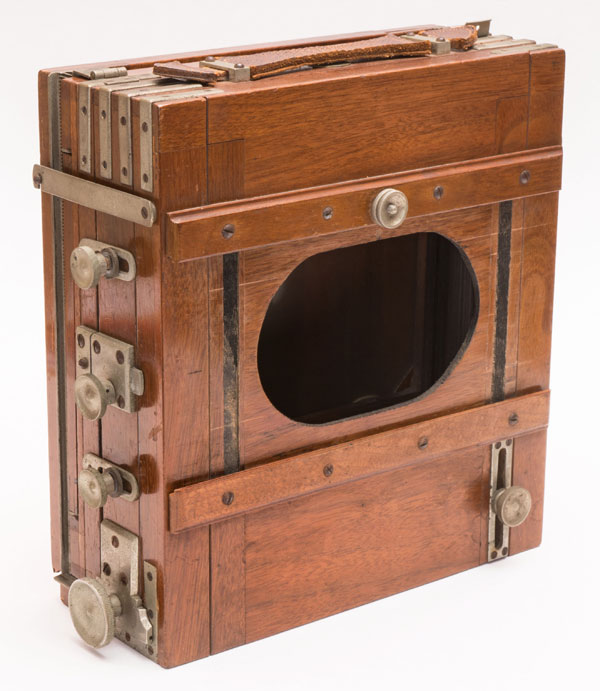 Closed and without the lens the Excelsior is like a small suitcase. The front is fixed to the base and the part that moves to open the bellows is the rear one. At the front, it is possible to manufacture several plates to accommodate several lenses. In addition to the original, I made myself some homemade ones for this purpose. 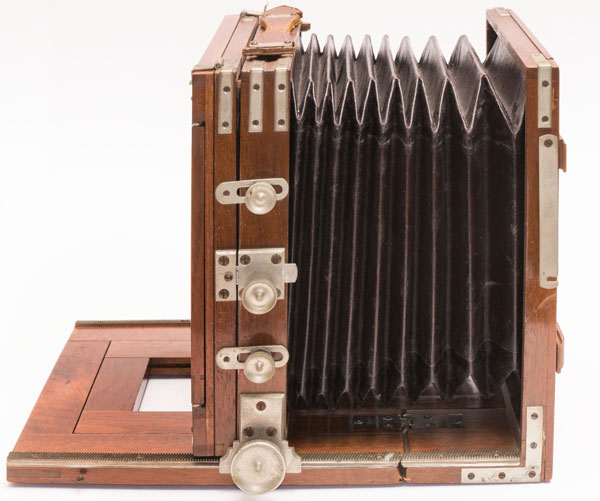 Once open, the rear can be slid over the rails by turning the focus knob. This type of field camera, which opens backwards, is called tail board. But it’s a construction that has largely been replaced by drop beds, in which it’s the front of the camera that topples over, placing the rails so that the lens plate moves forward. Like in Linhof Technika. 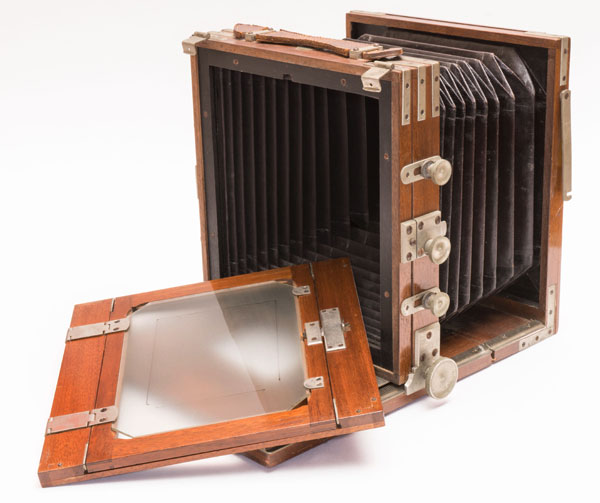 As these cameras are light but not so light that you can switch from portrait to landscape by only turning the tripod head, they usually have a square back and offer the possibility to rotate the it 90°. I’ve seen some tail boards that don’t allow this, but then they’re either only in portrait or just in landscape position. Placing the rails vertically is possible but not very safe. The camera loses its stability and becomes cumbersome to operate. 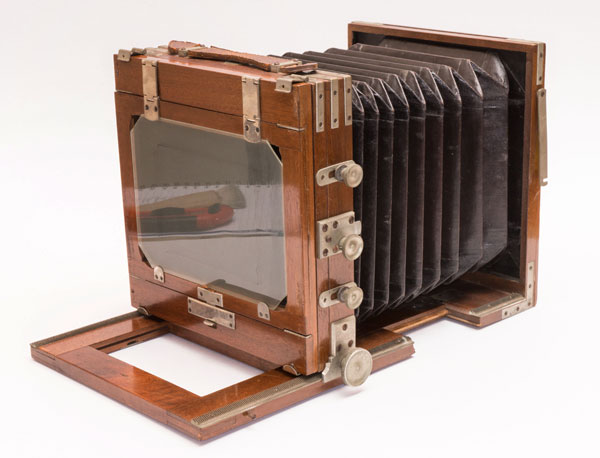 To allow the use of longer lenses, it is common for the tail board to have a double extension. In the photo above, it has been released so that its edge with the rails  slides further back, to allow for an extra extension of the bellows. When buying a camera like this, it is always important to ask yourself which lenses you intend to use. There is a limit both to wide angles that cannot be shorter than the camera, when practically closed, neither to long when they need to focus on nearby objects and demand a long stretch. Here at apenasimagens you have a tool that calculates the required extension of the bellows from the frame format, the lens focal length and the size of subject you want to frame. 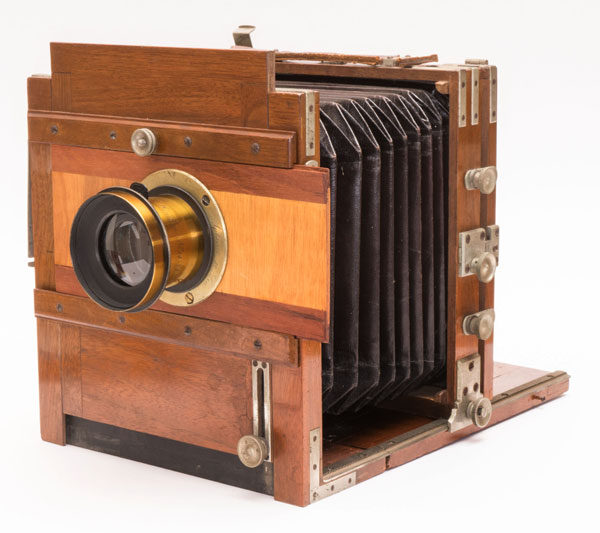 Towards the front of the tail board the vertical and horizontal shift movements of the lens plate are normally available. Releasing the appropriate knobs one can move the lens. The limit on this camera is abou one inch, 25mm, to either side or up and down. It’s not much but it helps in many situations. Above all, a front raise helps when you want to photograph architecture without the vertical lines converging to any point in the sky. 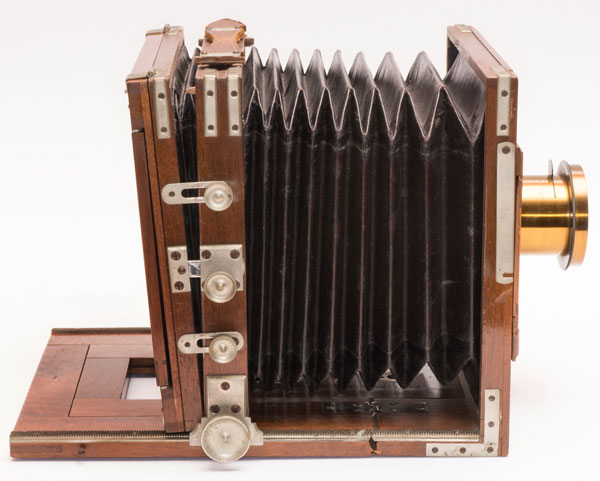 Angulations are normally done at the camerar rear. By releasing the side knobs it is possible to incline the film/plate plane both vertically and horizontally. This is very useful when using a wider lens and we want to focus on objects that are at different distances. With a large aperture on the lens we can’t rely on the depth of field to make this focus and so we have to move lens x film. The classic cases are: focusing on the two pupils of a subject who is in a  three-quarters portrait position, or focusing on a group of people when one is closer and the other farther away. Of course there is a limit to these corrections but Excelsior already offers a good margin for these angulations. 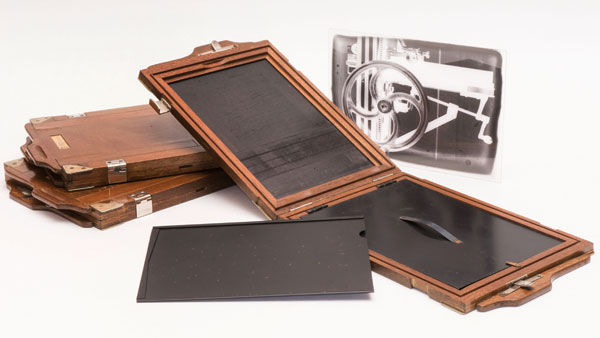 Another important point in using these cameras is the film/plate holder. We often find a camera in great condition but without its holders. Don’t rely on camera-to-camera compatibility. Typically, each manufacturer developed different holders for each model. These from Excelsior are of great construction and finish. Really exquisite carpentry work. I was lucky to find this camera with 3 double holders and so I can take 6 plates with me when I go out with the camera. In the picture above, we can see a glass negative in the background for which I prepared the silver gelatin and, on the foreground, a sheet film adapter. The original concept of these cameras is the use with glass plates. Usually they accept up to 2 mm glass, those for windows. But sometimes only those with 1.0 or even 1.5 can be used.

Among the tail board type field cameras, the ICA Excelsior is a very complete example and gathers practically all the adjustments that can normally accompany this type of camera. I set aside some lenses to use only with this Exelsior and also a studio-type shutter, with adapter rings depending on the diameter of the objective. Amazingly, it’s a camera still fully usable these days. Of course, it’s not suitable for action shots, but for landscapes, still lifes and posed portraits, it’s very pleasant to use.

Going back to the opening photo, I’ll introduce the lenses. Left to right: Voigtlander Euryscope. Goerz Lynkeioscope, Steinheil Gruppen Antiplanet and a landscape achromat from Hermagis.

With the negative in the photo above I printed a cyanotype. I particularly like the 13×18 format a lot as it already has a certain presence for contact prints. 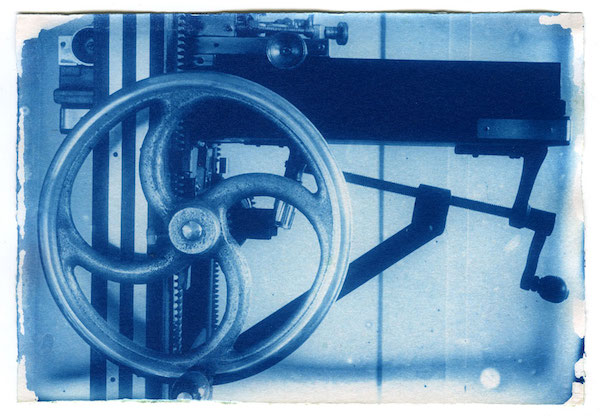