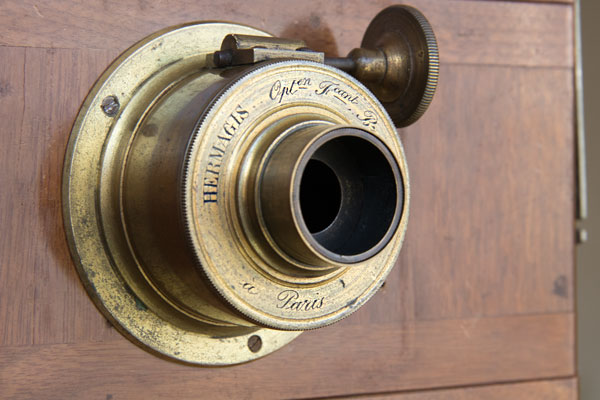 This is a lens that follows such an old constructive concept that it was used in the experiences of Nicéphore Niépce and Daguerre. In his book on French lenses of the nineteenth century, Agostini brings an advertisement from Hermagis which quotes its foundation in 1845. It was a company with considerable technical capabilities, for some of its Petzval type lenses had really large diameters, something like 6 inches. But Hermagis was not a house to bring new milestones in the history of photography, it was a successful manufacturer with good quality and able to produce lenses that took paths opened by others.

This lens is specifically called “for landscapes”, it belongs to that category which in French is called paysage, and also pour vues, or landschaftslinse, in German. Pour vues, is certainly in the tradition of vocabulary adopted by Nicéphore Niépce and means “for views”. This is due to the fact that having such a dark image, it only lent itself, at the beginning of photography, to still and well-lit subjects such as external scenes in day light. It also highlights the fact that the images were recorded directly from a “view”, by the light itself, and not by any artists’ hands.

Another very common way of finding references to this design in literature is “french lens”, French lens, because historically its commercial success came first of French firms. The diagram above, taken from Etienne Wallon’s book, presents its predecessors. Drawing number I shows lens and diaphragm as they were made in the camara obscura, used for drawings. The arrow indicates the direction of light. It was a plane convex lens that was later replaced, to a large advantage, by the concave / convex meniscus, number II, development of English William Hyde Wollaston (1766 -1828). Note that the diaphragm has moved far away from the glass. The number III lens is already of a type that was used as a photographic lens. This is a lens made with two cemented lenses. At the time, Canada’s balsam was used for this purpose. Glasses, flint and crown (left and right) have different refractive indexes. The curvatures were adjusted to bring into the different colors and so the pair is called “achromatic doublet.” The discovery of this achromatic doublet goes back to the eighteenth century, but the first manufacturer to extensively produce these lenses for photography was Charles Chevalier. It was he who provided the first photographic lenses for Niépce and Daguerre. At that time already it was the generation IV, according to the classification of Etienne Wallon and Chevalier gave to them the name Periscopic Meniscus, according to D’Agostini. Given the sudden explosion of demand, Chevalier was immediately followed by others, including Hermagis. 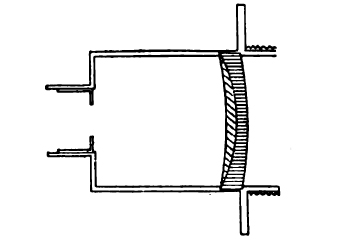 Soon came more complex and better designs like the Petzval type. At first, the “French lenses” lost much of photographers’ preference in favor of these new options. However, after a quick abandon, as soon as light emulsions were developed and small aperture ceased to be such a serious problem, the redesigned doublets re-equipped many cameras and were sold yet for many decades. Even in the early twentieth century many Kodak used this concept. The diagram on the right, also presented in Étienne Wallon’s book Traité elementaire de l’objectif photographique from 1891, shows the design of a French type lens already with the revised drawing. Now the crown and flint have changed position and what you have is a meniscus that is the sum of two menisci.

In his book Ausführliches Handbuch der Photographie, 1899, Josef Maria Eder comments on such lenses being manufactured by Suter, Voigtlander, Goerz, Busch, Fritsch and Français. Which shows that it was an obligatory item in the lineup of the main opticians. 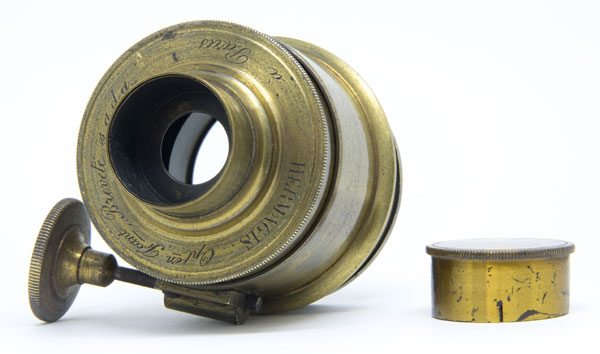 Well, then this Hermagis is a typical, well-preserved copy of a French lens. In French literature it is referred to as objectif simple. However, it is already from generation IV (above), in which the flint becomes biconcave and the crown biconvex. In order to differentiate III from IV, it suffices to note that the lens with a thin border is always on the side of the convex face and then, if this characteristic is observed, if the other face is flat, it is III and if it is concave it is IV. It cannot be of the kind quoted in 1891 by Wallon, for in that case the edge of the rear lens would be thick rather than thin. 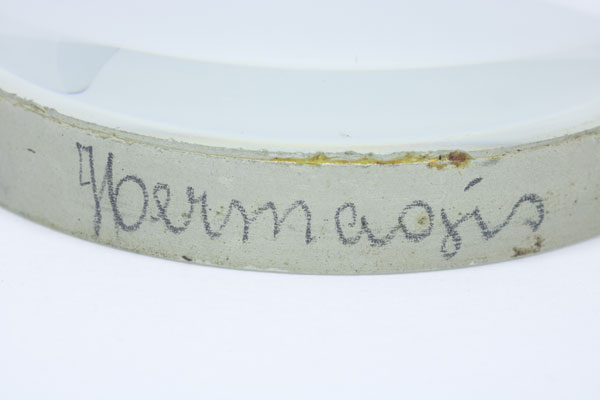 In this close up photo you can see the inscription in pencil, a practice very common at the time. We also see the splice where the two lenses are glued together so we can identify it as a doublet. This yellowish is the oxidation of the balm which fortunately has not entered into the lens itself. Separation and defects in the balm are very common problems with old lenses. But it is usually possible to disassemble, clean and cement it again, with the balm or with modern UV cements. 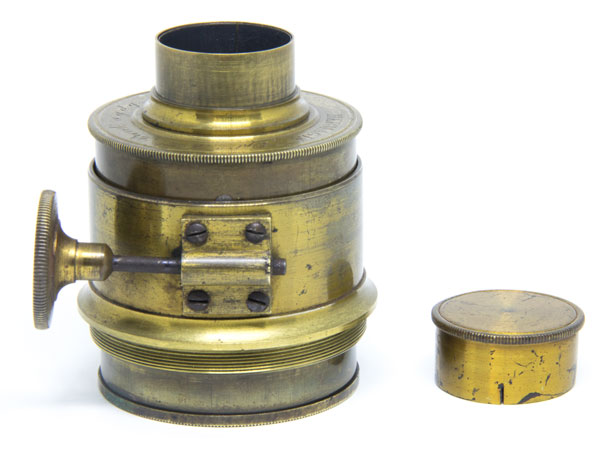 The assembly of these lenses is also very typical. Some have racks and some do not. However, the most characteristic is the diaphragm that is mounted in front of the lens inside a small tube that functions as a sunshade. The exposures were usually so long that the shutter was simply the lens cap. 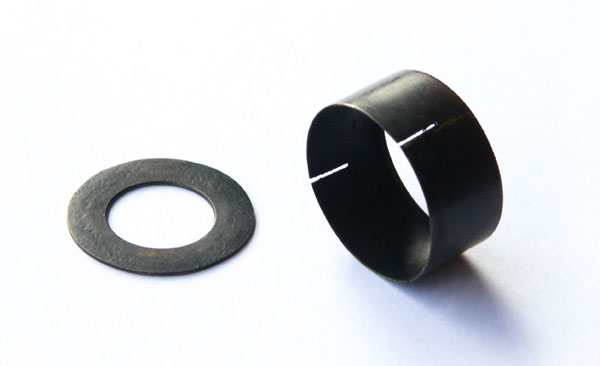 Different openings were chosen by changing a diaphragm of washer type. This looks like it’s original and came with the lens that was bought in Bièvres in 2017. It has 15mm internal diameter and this gives an aperture f/9.3. As the diaphragm is in front of the lens, the entrance pupil is the diameter of the washer itself and to calculate the aperture simply divide that diameter by the focal length. In the literature it is often mentioned apertures of the order of f/30 which, added to the slowness of the processes of the time, demanded really long exposures, in the range of minutes even during the day. 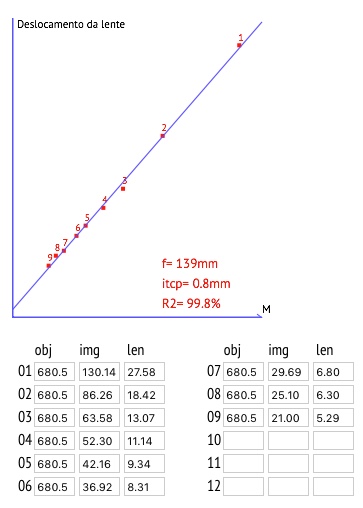 The focal length was never marked on this type of lens. In fact, focal length took a while to be used as a reference to an objective. The manufacturers’ catalogs generally mentioned the format it covered. One whole plate was 18 x 24 cm, one half plate 13 x 18 cm and the fourth 9 x 12 cm. The focal length of this lens was then calculated experimentally by successive measurements of magnification. To see how it was done, visit this page, there you find a calculator, with instructions, that greatly facilitates the task and presents a graph like this one on the left. The result was 139 mm which can be rounded to 140 mm, which is a more sympathetic number, and we will not be missing much. The measurements show good consistency and then this result is quite reliable.

The image circle, measured on the polished glass, being very condescending, was 125 mm. Insufficient even for a 9×12 cm format without cropping the corners. By taking that data and the focal length on this calculator, we have a viewing angle of 48 °. This is reasonable to call the lens “normal”, but it seems quite modest for landscape photography where larger angles are usually required. In order to photograph monuments, cathedrals  for instance, one must take a huge distance. In a very critical case, such as the Cologne Cathedral, which is 145 meters high, on a 6 x 9 cm film, it is necessary to take almost 250 meters distance. You can do simulations of this type in this link. With this format, 6 x 9 cm, it is only possible to raise the lens by 10 mm without vignetting. Any perspective correction will be well compromised unless you get a high point of view. This other calculation can be done at this link. 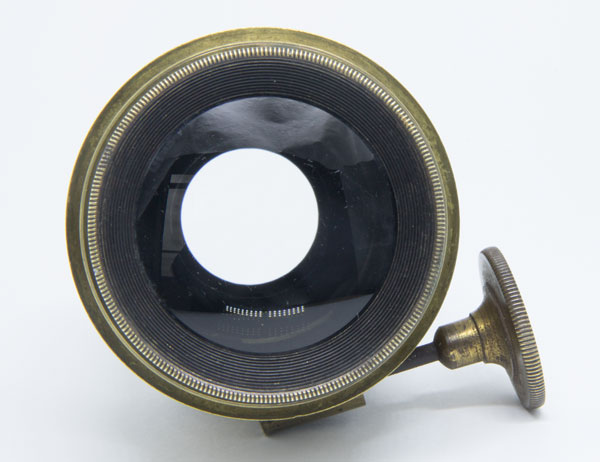 The overall condition of the glass is excellent. The lens diameter is 40 mm and the total length is 77 mm. There is no engraved serial number on the barrel and it is not even written on the edge of the glass as it is very common for Hermagis. Perhaps an inadvertent user has “cleaned” this information without wanting to. Its date of manufacture can only be estimated by the overall appearance and lens design and probably dates back to the 1850s or 1860s. Unfortunately, I have not found any more specific Hermagis documentation to be able to be more precise. 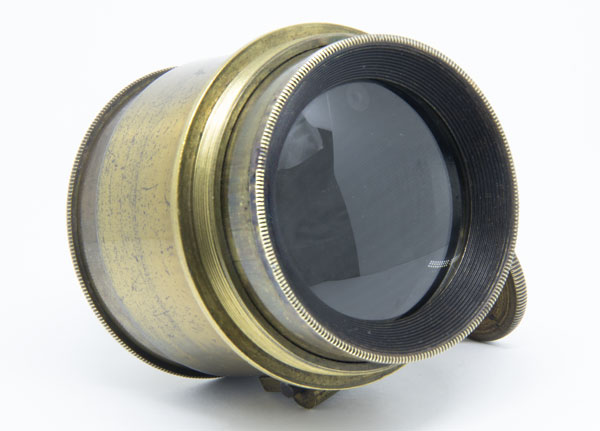 The flange thread is 57 mm in diameter and the flange has 3 holes. Apparently it is an original flange because the state of the brass has an appearance very similar to the body of the lens. The cap, on the other hand, presents the lacquer, which was normally shellac, in better state of conservation. This may indicate that it is not original, which would mean a happy coincidence by the perfect fit, but it may also indicate that for some years or decades someone wore a leather overcap as I have already seen it was used at the time. 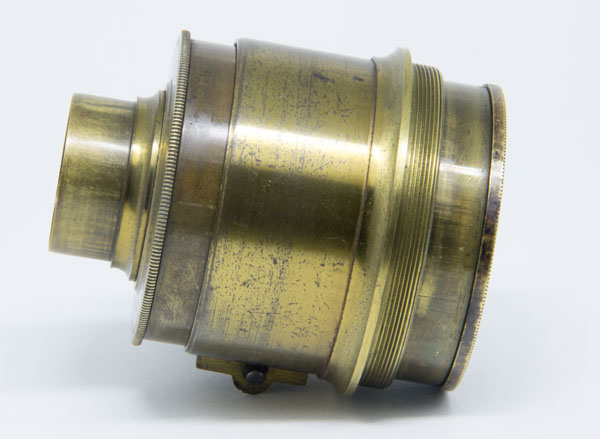 Inside the cap there is an inscription that I could not relate to anything. Looks like a F BOT 19 S. 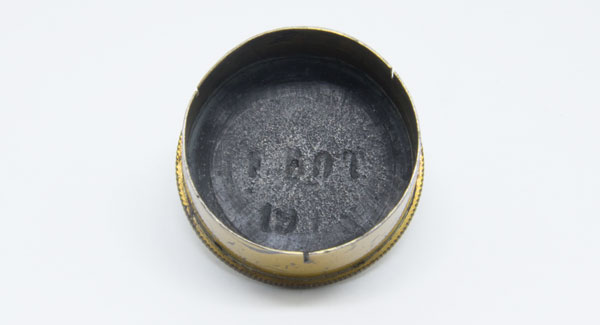 In order to use the lens with current emulsions I have adapted an Ilex shutter that fit well in place of the cap. Luckily the addition of this shutter did not increase the vignette. 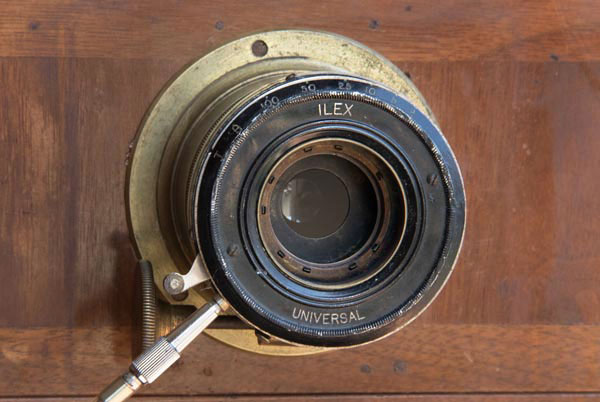 Being a lens for landscapes, I wanted to try it out in an external scene. The photo below is a scan, without retouching, of a 9 x 12 cm negative. It was made with Ilford FP4 shot at ASA 125. Exposure was f/9.3 and 1/100 s speed. I used a yellow filter to reduce the light input because 1/100 s was the faster shutter speed but still a bit slow for the scene. The developer was a homemade Parodinal and the development made in an open tray for 7 minutes at 20ºC. 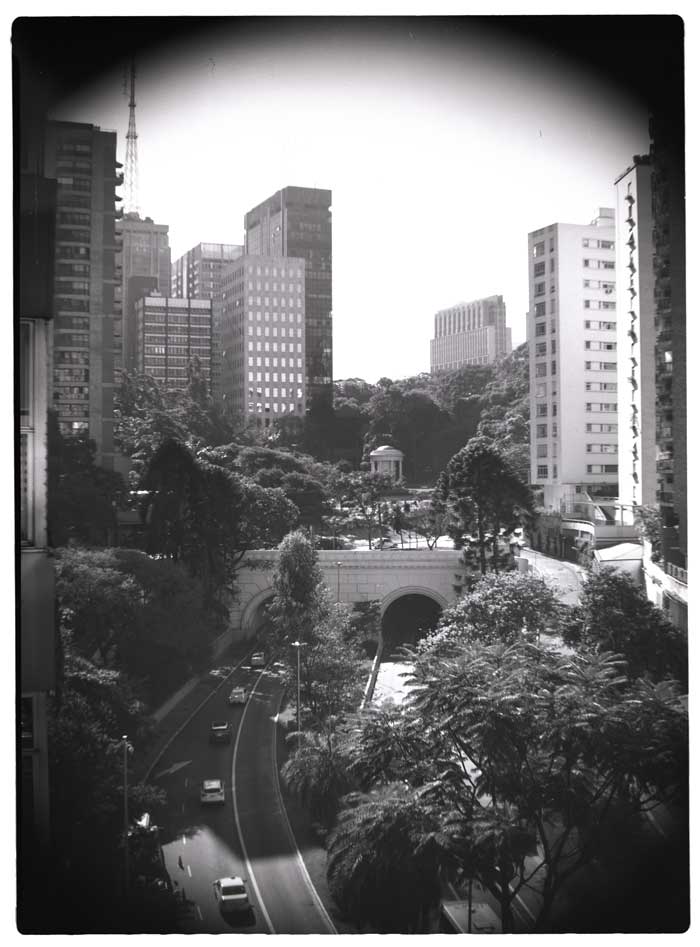 This result pleased me greatly. By inspecting a real copy, it may be noted that it is not a very sharp lens, but at an enlargement up to 18 x 24 cm, and arm’s length distance, the image works well. Sharpness, after all, is not everything about an image. Today, external pictures with f / 22 or f / 32, with contemporary films, are quite practicable and  I am sure that with these diaphragms this Hermagis, would not denounce its age.