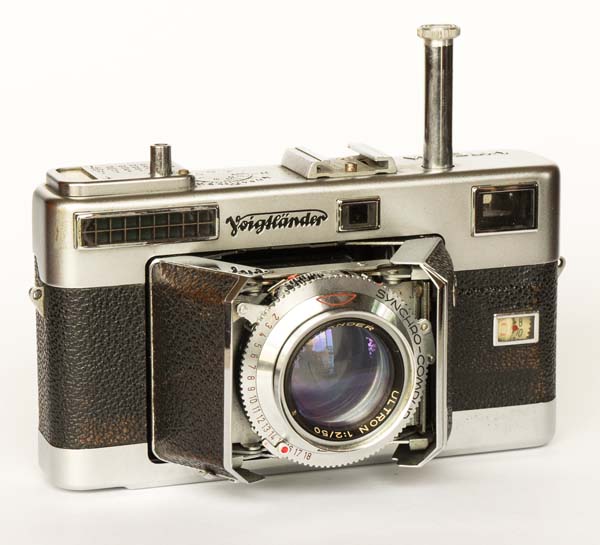 This Voigtlander design is very elegant and functionally creative. The Vitessas are from the 50s and this Vitessa L was produced from 1955 to 57. It is a 35mm folding, like many others, but with bellows and barn-door opening. The film advances with a translation movement instead of the most obvious rotation of a lever. When pressing the rod on the top of the camera, the film advances and the shutter is cocked. The all rounded corners and the satin finish of the metal parts leave no doubt that it was a camera for a more sophisticated market. 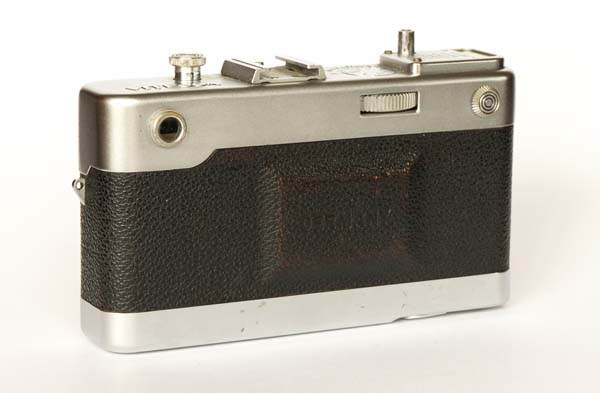 Another option for being different: although it is intuitive and apparently easier from an engineering point of view that the focus adjustment is through a ring on the lens tube itself, several Voigtlander models have brought the focal control to the top of the camera body. This is also the case with Vitessa. What is desired is simply that the lens move a little away from the film and a long pitch screw (a helical) is the most elementary device for doing this. But at Vitessa the focus adjusts with the right thumb acting on the knurled wheel at the top right at the rear of the camera.

A very interesting detail for the time is that the focus by telemetry had, in the most recent models,  parallax correction. That is, the difference in viewfinder and lens views, which becomes more important at shorter distances, is automatically corrected each time the camera’s focus is brought closer.

The camera can be “stripped” when a single piece removes the bottom, back, sides and front of the camera. The body itself is a very solid and robust cast and machined metal block. The disk that appears in the front right, in the photo above, is the frame counter. It needs to be reset manually when loading a new film. 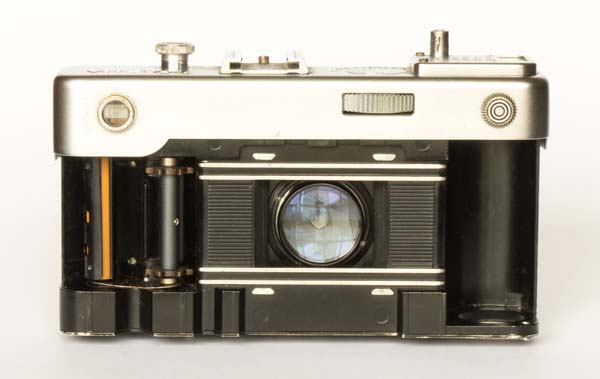 With the front closed the lens practically touches the film window. It is interesting to observe how the maximum aperture of f / 2 requires a lens with a diameter almost equal to the height of the frame itself. 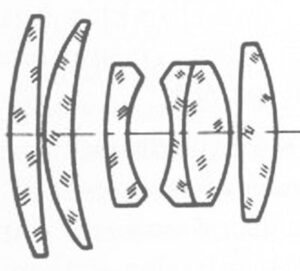 Ultron is a reasonably complex lens as it has 6 elements in 5 groups. The more surfaces the designer has at his disposal, the more resources he has to make the image flat and free from aberrations. The problem is that if on the one hand it has more options to control the light that will form the image, the “rebel” lights that will reflect instead of passing through these surfaces also grow and this has the effect of spreading light where and how it shouldn’t. The result is a general loss of contrast.

But Ultron is a happy case where this balance has been very well resolved. The images it generates are very sharp compared to other optics with the same basic features. 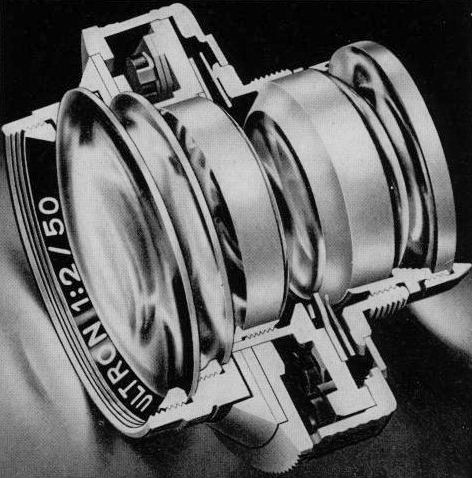 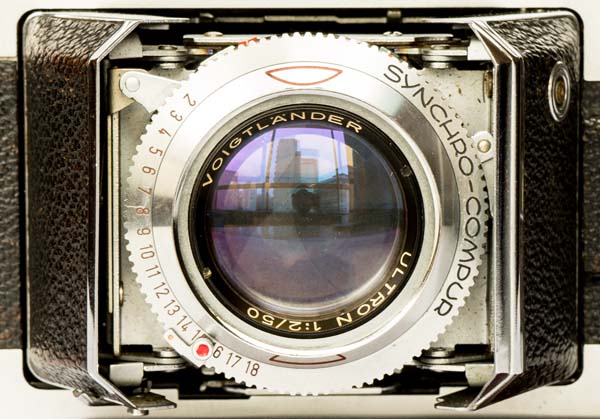 The shutter is a synchro-compur with speeds B and 1 to 1/500s. Vitessa L is one of the latest models in the series. L stands for lightmeter as it comes with a built-in lightmeter. 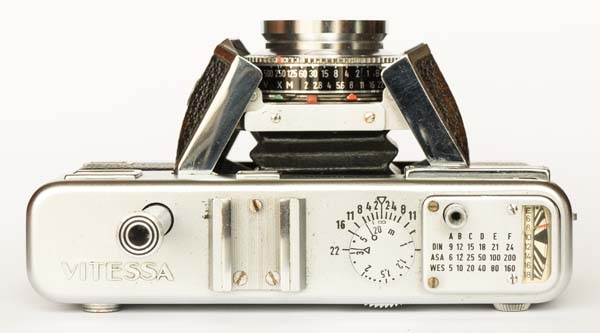 In this lightmeter, on the top of the camera, after adjusting the film’s ISO (still ASA at that time) according to the letters A, B, C … F, we point the camera at the scene and read an EV value, this value must be marked on the scale in front of the lens from 2 to 18, with ½ point of precision. Each unit increment of EV corresponds to twice the light of the previous value. Once this is done, the speed and aperture are already coupled and by rotating the toothed disc we choose the best speed x aperture pair according to the intention of the photo.

This EV system was very popular in the 1950s and I find it very practical. For anyone who gets used to a certain ISO it is very easy to remember that sunny days are between EV 14 to 16, that interiors with good windows are EV 9 to 10 and so on. I find it easier to think of a single number and then choose a certain speed x opening pair. Still on top of the camera is a scale that shows the focus distance and depth of field scale. 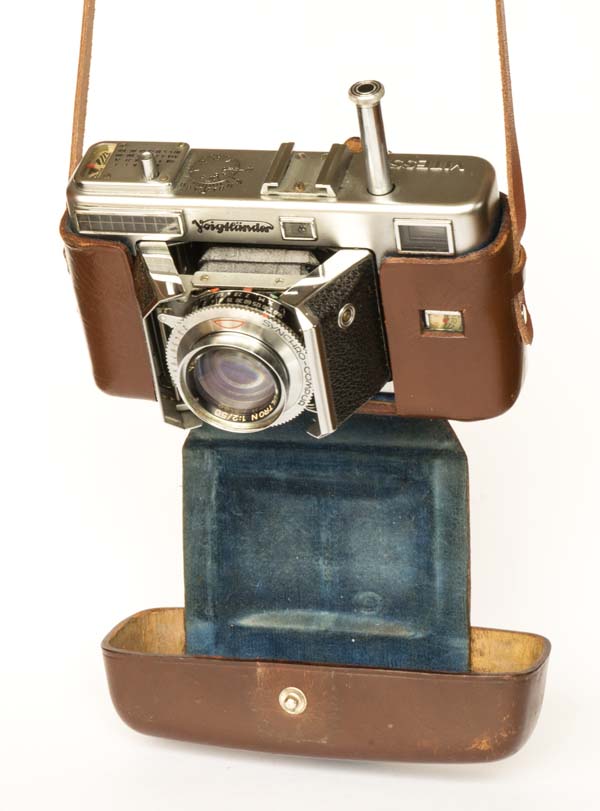 In later models the folding was eliminated and this made it possible to change lenses. But I consider Vitessa with its barn doors the happiest and most elegant design. When closed in its brown leather case it looks like a small purse and is very practical for travel.

Below is a photo I took with this Vitessa L at the Museum of Ancient Art in Munich. 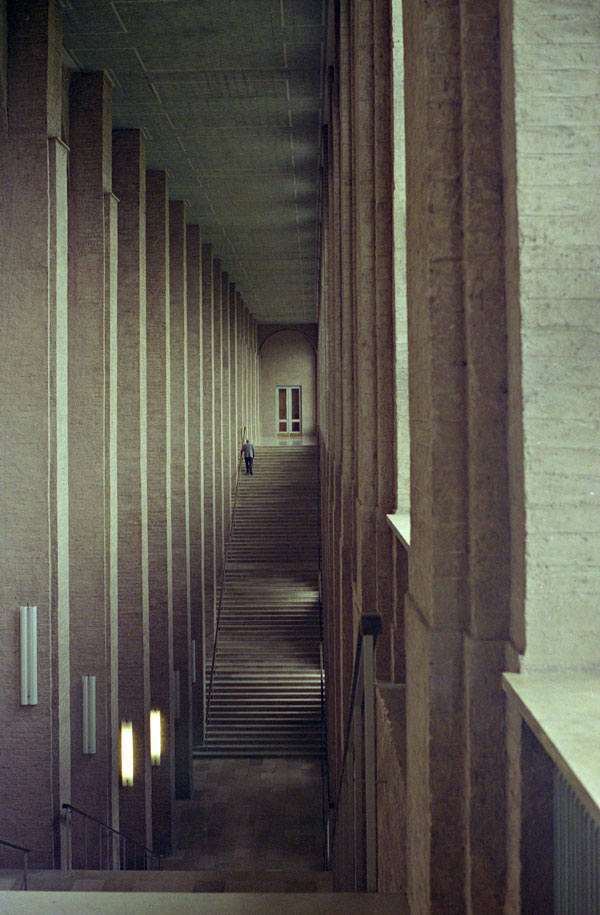 This one in Brussels 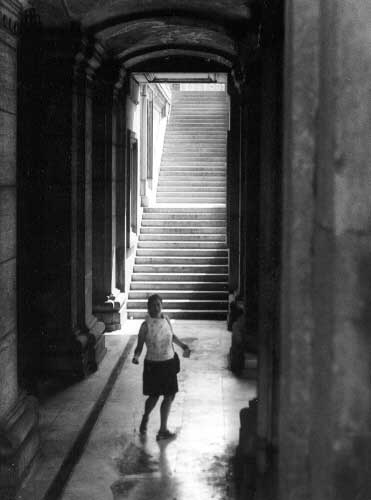