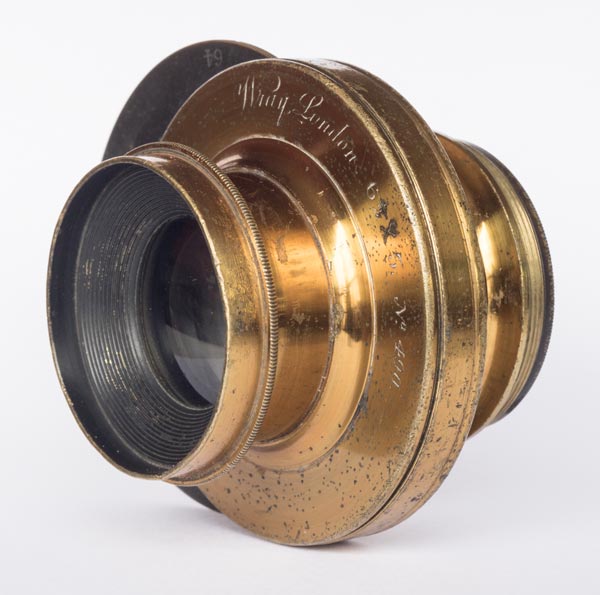 This is an English lens manufactured by William Wray who was born in 1829, a solicitor by profession, but an astronomy enthusiast. As in many other cases, his dedication to the observation of the stars led him to build his own devices, such as telescopes, and after a while the hobby evolved into something more serious and he ended up as a respectable manufacturer and designer of these instruments. Much of the photographic lens industry came naturally from the portfolio expansion of companies operating in the scientific field of microscopes and telescopes. That was the case of the Voigtländer, among the pioneers, and even Leitz, famous today for Leica cameras, but initially a manufacturer of microscopes. Wray company came into photography when it was already a well-known telescope firm. Others came from simpler optics, such as Derogy (French), Wallet in the previous generation, and who were originally eyeglass manufacturers. 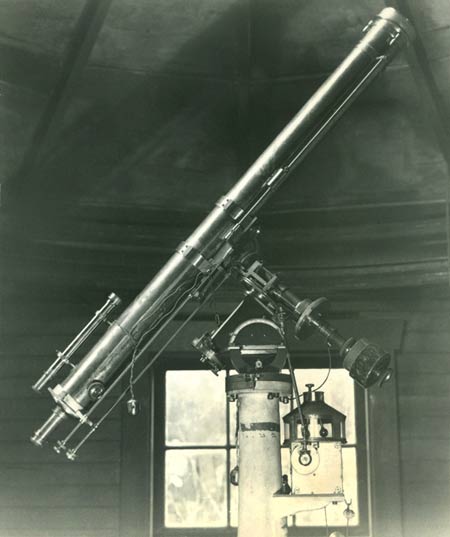 In the 1880s William Wray, in his fifties, began producing photographic lenses and was able to immediately leverage his prestige as an optician in astronomy to this new area. He did not develop any new concept but recalculated and produced good lenses within the already consecrated designs of his time. He made meniscus (concave/convex lenses of a single glass), Rapid Rectilinears (two symmetrical doublets) and variations on this theme including Casket Lenses – set of lenses that can be combined and result in different focal lengths. His firm produced lenses for many camera makers. In the 1890s it was the boom of the Detective Cameras, which were basically cameras for hand held photography, for snapshots, and many of them were equipped with Wray lenses. The most widely adopted format was the 4×5″, and the Wray lens that succeeded in this configuration was a Rapid Rectilinear with f/5.6 aperture and 4 ½” focal length (approximately 126 mm).

William Wray died in the late nineteenth century and the company lost much of its vitality. But in 1908 it was acquired by Albert Arthur Smith, coming from Ross, another very important English manufacturer, and under new administration the brand recovery prestige in the market. It is possible to find many optics and also cameras with the brand Wray, among them the Lustrar, a very extensive line of lenses for various applications, and the Wrayflex, a 35mm monoreflex camera launched in 1950 and much coveted by collectors. 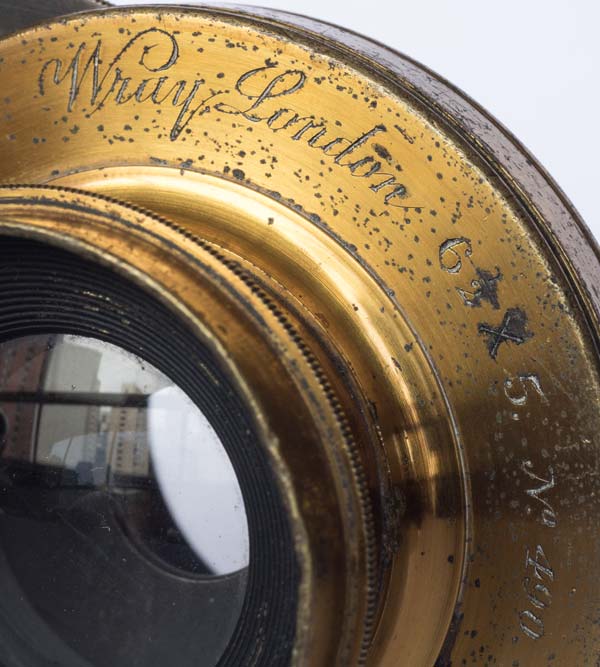 Following an entry on Lens Collector’s Vademecum, (page 329), this lens should be a Rapid Rectilinear. Its shape strongly suggests the symmetrical construction of RRs and the indication of a 6½ x 5″ frame (shown above) added to its measured focal length of 201 mm, let us call it 200 mm, corresponds closely to a description for a lens of this format manufactured in the first phase of Wray firm. The serial number 490 suggests that it was actually produced at the very beginning of Wray’s photographic lens production. 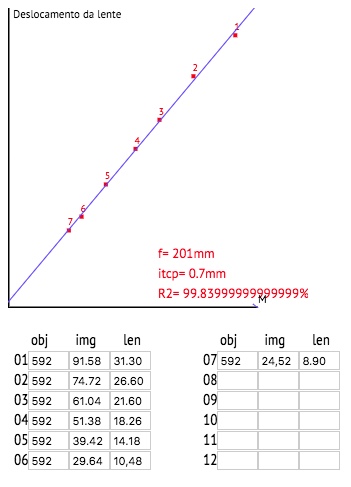 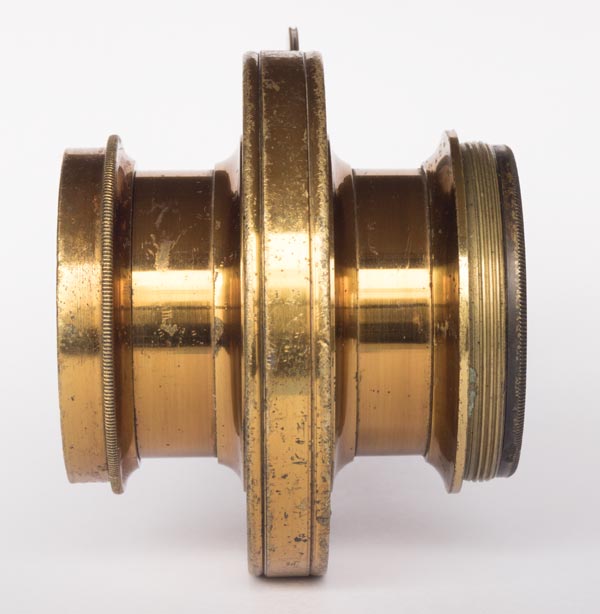 Special in this type of construction is the diaphragm in the form of a rotating disc. That solution works very well when the glass diameter is not so large. It is quite practical compared to the Waterhouse system consisting of loose parts that are inserted into a slit in the lens barrel and easily get lost. In the case of this Wray RR the diameter of the glasses is only 25 mm (the total length of the lens is 52 mm). The disc with the apertures presents 5 different measurements. 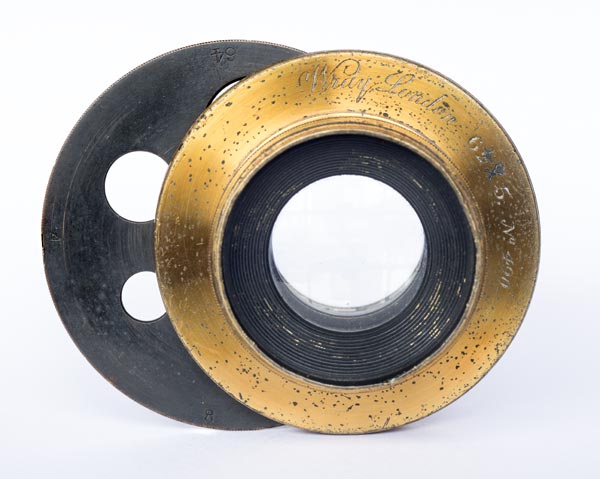 Right at that time, the standardization of aperture scales was under discussion. The idea was about providing photographers a way in which they could be sure that different lenses, from different manufacturers, as far as they had the same f-number, would be transmitting the same amount of light, no matter the focal length. Wray used a scale that was not yet today’s sequence (2.8, 4,  5.6, 8, 11, 16, 32…), but only one step behind:

In this lens it is yet used one that had been discussed in the Photographic Society of Great Britain, as it appears in The Photographic News of February 29, 1884. On this scale it is assumed that to a lens with aperture corresponding to 1/4 of the focal length should be assigned an aperture 1. The following figures evolve in powers of 2 making the series: 1, 2, 4, 8, 16, 32. .. while halving the amount of light in each step. In the picture below there is a 16 engraved on the left indicating the aperture for  the hole that appears on the opposite side. But that is not “our” today’s f/16. 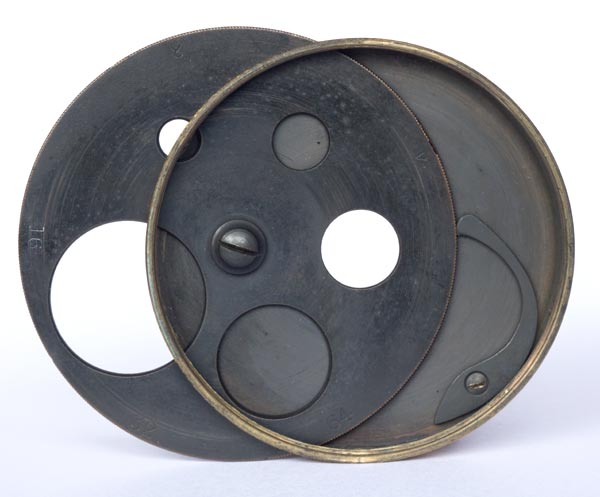 I measured the entrance pupil for the five diaphragms (see method here) and found the following values: 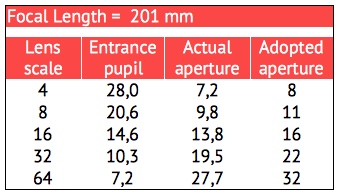 In this chart, the figures engraved on the disk are in the first column. Then comes the entrance pupil in millimeters and the actual aperture calculated as focal length/ entrance pupil. I rounded these values up to the known values that appear in photometers. The maximum aperture f/8 also corroborates what the Vademecum says for the RR lens that makes 6½ x 5″, thus providing another lead that that is the lens. It may seem a bit frustrating not finding the exact figures but, after measuring several lenses I noticed that in the old ones a certain deviation is quite frequent. In the end, I consider also that in photography, density and perception scales are in logarithmic relation, so as a rule of thumb, differences of 10 or 20% are not as serious as in other fields (finance, for instance). 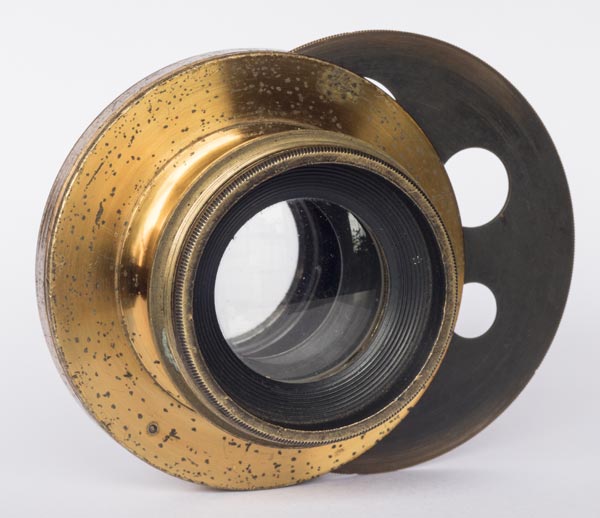 There is a certain irony in possessing a Wray lens with disc apertures. Because precisely William Wray was one of the leading manufacturers in promoting the industrial introduction of iris type diaphragm. Not that the system was not known a his time. Nicephore Niépce had already used it in his research. In fact, it is not known who was the “inventor” of the iris. But it was necessary to invent a machine capable of making these devices efficiently in order to equip the thousands of lenses that were produced every year in various parts of the world. It seems that such technology had much of William Wray’s contribution. At least judging by the following passage from The British Journal of Photography of April 14, 1893. It reports a visit to the factory in Highgate on the outskirts of London:

“Entering the first of these workshops, we observe four rows of turning lathes extending from end to end. Some of those are elaborately fitted with slide rests, face plates, and similar belongings incident to such ‘machines. At one end we observed an elaborate mechanical appliance which we could not relegate to the department of either lathe, planing, or shaping machine, being unlike anything we had previously seen made use of in connexion either with the construction of loupes, telescopes, or microscopes. This, Mr. Wray informed us—demonstrating its modus operandi—was an entirely new machine they had made for the production of Iris diaphragms, it being used for cutting and drilling the slots and holes which form a portion of their internal mechanism. This machine, when once set for any special size of tube, did its work with a degree of perfection quite impossible to be attained by the most careful and skilled hand-work. “

Anyone who has carefully observed an iris can figure the technical difficulty in putting rivets in small blades of a few tenths of a millimeters thick. And yet, the new system has become universal for virtually every type of optical device that needs to control the opening of its lenses. In another passage in the same journal we read that the irises produced by Wray had up to ten blades and produced a very precisely circular shape opening across the whole scale.

Below is a picture I made with this lens. I used f/16 and exposure with a studio shutter, for about 1 second. The film was Forte 200 ASA in the 4×5 format. The print is 24×30 cm in Foma MG Classic double weight paper. It is a paper that has texture and warm tones. What I like about this lens, and many others of its time, is that it is possible to distinguish even a single hair of the sitter but, at the same time, there is a softness in the image that differs a lot from the standard of the current lenses, yet intensified with “clarity” or “sharpening” controls of Photoshop and the like. There might be a filter or something enabling a digitally captured image, with one of today’s superb lenses, to achieve the same look and fell, but it is far more gratifying, at least for me, to see that image “coming” slowly, decisively and at once, inside the developer tray. 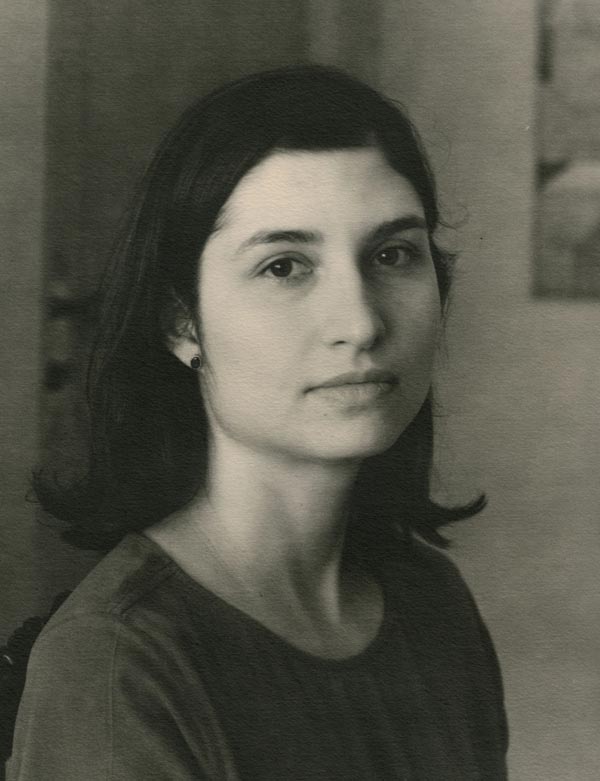