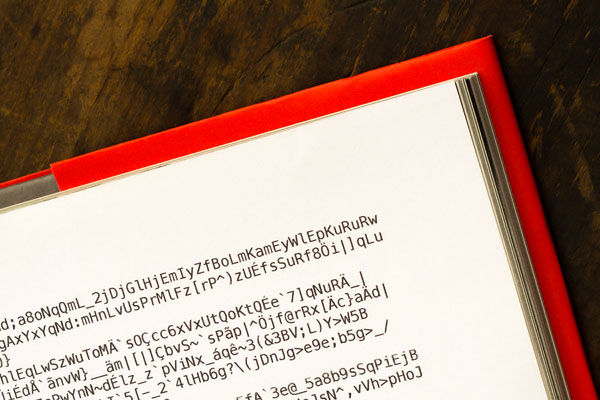 It is a fact that the digital image has a state in which it is pure information. That is the case when it is written as a file, as sequence of bits. But once printed in paper, it is no less physical or material than the traditional analog photography. Similarities are not only in this final output. A digital sensor is a grid that registers the incidence of light in each one of its cells through physical transformations that occur inside them. The same way, silver halide suspended in gelatine over film base also undergo a transformations due to the incidence of light. The halides molecules are single entities and are also “digital” in this way. Simply we do not count them, we do not transform them in sequence of numbers by reading the film, while we do it from the reading of digital sensors. If we look carefully enough, everything in nature is digital, nothing varies continuously in a smooth analog way. What we call analog is simply what is so big and so numerous that we are not able to see it in packs, discrete or as quantum. There is no such a difference in the inner nature of both processes. Both are based in natural phenomena as far as photo sensitivity is concerned. Both end up in an object that is highly stable, usually made up of cellulose (paper) with pigments and/or gelatine and oxidised sylver.

There is a difference, but it is rather on the process that starts from a common root, in a phase that is nothing but intermediary: in one of them we can count, find a numeric presentation of phenomena, of a state of matters, a description, and later transform such information in matter again, while in the other, we are limited to reproduce images as stamps, either via contact printing of projection. About image as information, in a digital file, the concept of original makes no more any sense. Files can be considered as equals. They are like scores to be played as images. Like books to anyone who wants to read a romance. Nobody is preoccupied in play a music from an original score, or read a book directly from authors manuscript. In the same way, any copy of a file is enough for anyone to print a photograph. It should not be a drama. It could not be considered the “death of photography” as it has been said. Professionals from the medium could learn to live with that from their friend’s experience in music and literature. Music remains what se listen, literature what we read and photography will always be what is seen.

Some other questions seem to me more interesting to advance than keep going in accusations and lamentations against the new technology. In a present’s anthropology we could ask ourselves: why all of a sudden people are discovering a certain materiality for analog photography and denying the same materiality to digital when the latter can, plainly, offer the same museum quality features of permanence to its output? Why that seems to concern more photographers and people from photographs milieu, while the grand public, as it seems, happily abandoned film, then camera and has limited its image making experience entirely to mobile phones? The mobile phones market is a substitution or comes on top of dedicated cameras’ market? For domestic usage, are there less printed image today than in the past? If we are losing interest in images that remain, that keep memories, if a glance on a small screen, for one second, is all the appreciation that an image will ever have, or at the most, its short life while sinking in the well that is the timeline in social networks, this is not because we are in chains with this new technology and have no choice but proceed this way. That is our choice. Why are we going in that way?

That was a jest that came up to my mind while reflecting upon this matter. I remembered that some image files, the .eps (that I think is not in use anymore) and the current .pdf, are not actually a sequence of zeros and ones, instead, they use the ASCII character set. Thinking about it I imagined that we could print a book with an image file, granting it in this way an extra life to its “as information” state. Yes, the “score” doesn’t need to be electronic, it can be on paper as well, why not? Changing the extension from .pdf to .txt and opening with an editor like notepad, you can have image in a text form. Imagine then an archeologist from the next millennium finding that book in an excavation. He could, like a Champollion, type the sequence again in a electronic file and, by deciphering its driver (we wish him good luck) he could print the image left in a text. Wouldn’t that be funny?