A little story of images 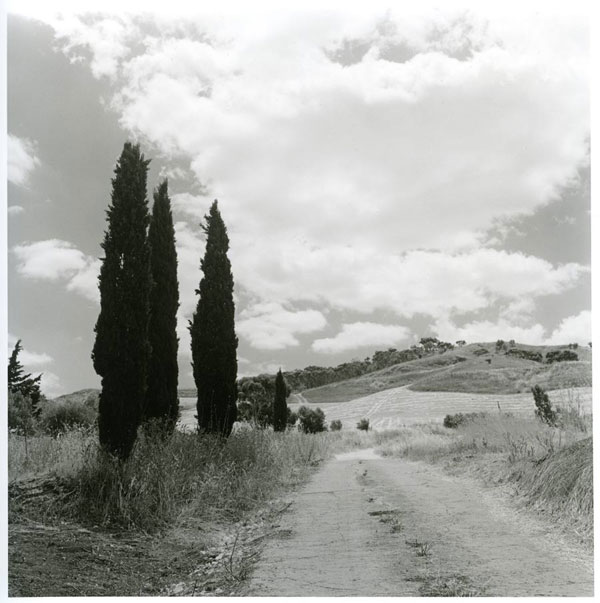 One day I was walking on a dirt road and at a certain point I came across a scene that seemed beautiful for a photo. Paths, roads and stairs usually attract me. This one had tall cypress trees and the clouds mirrored the converging lines of the road. It was still one of those wide landscapes stretching far into the horizon. I had a Super Ikonta IV, a very old camera, from the 50’s that makes the 6×6 cm format. When you have a camera like that, you don’t click without thinking because they only carry 12 photos. Each image needs to be studied so as not to waste precious film. But I evaluated and thought that that place, that scene, that light and that atmosphere had already made a mark on me and deserved a permanent record of that walk. I took the photo. Back home I enlarged it by the traditional method on silver gelatin photographic paper.

This camera is not a camera that came to me with no past, from an auction house or a dealer. The former owner is the grandson of a photography enthusiast who bought it brand new in 1957. It came with the store receipt specifying exactly the one in question and for which I feel today a temporary guardian. When such a camera reaches my hands, I like to give back a photo taken with it. That was how I made one more copy of the landscape and sent it in the mail so that Alessandro, grandson of the first owner of the camera, would have at least one image made by me, with his grandfather’s camera, as a souvenir and compensation for the separation. 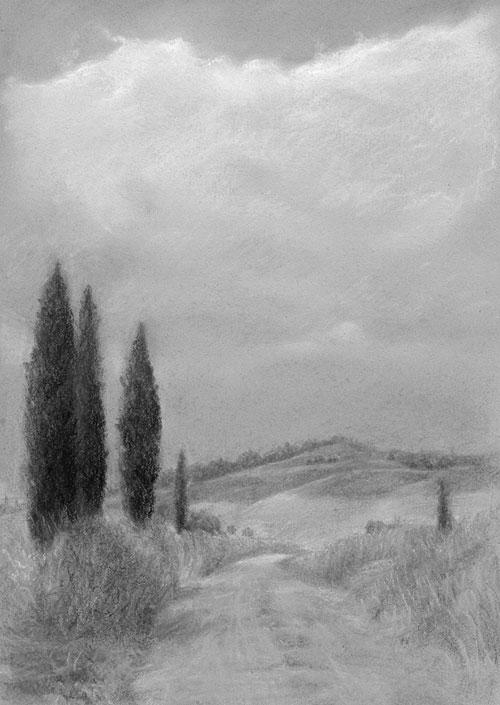 Months later, in Facebook conversations, he sends me an image made from the photo I gave him. The fact is that he was taking a painting course and needed a subject for an exercise. He took the photo as a reference. When I looked at it, it was like lightning, I suddenly understood what had attracted my attention to that scene. The characteristic rendering of manual work in chalk and dry pastel immediately reminded me of my childhood. I loved to draw and my father presented me with several painting books that he found at a sale in downtown São Paulo. Among them were Van Gogh with his cypress trees and Camile Corot who often used this composition of trees in a corner of the foreground and a landscape opening up to a distant horizon on the opposite side.

Certainly, in the subconscious, as I walked along the road, my brain was automatically running a scan, like a Google search engine, on all my past references. When I got to that point: bingo! There he found a reverberation, a reflection, a relationship of resemblance that in many ways went well with good memories of my childhood while browsing through those books. After looking at Alessandro’s image, I even remembered the delicious smell of paper and printing ink, characteristic of new books. Smell that I met in those painting that were my first books. 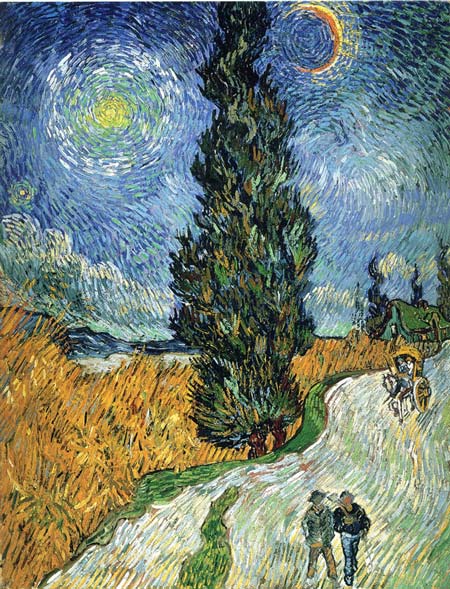 I remembered Gombrich when he explains that we do not see with the eyes but with the brain and that the act of seeing constantly seeks recognition, the pairing of present and past experiences. There is a relationship of familiarity between the images, an iconographic genealogy that constitutes our repertoire of visual experiences. The invention of photography was less disruptive than we normally imagine it was. There was something new, no doubt, but it was once again a huge repository of ready-made images, received, metamorphosing into new media. Images are not random collections of elements, they are not things “of nature”, they are whole narratives and it is like narratives that we keep them. The paintings I saw as a child generated the photograph that came back to the painting in Alessandro’s hands. Certainly he is also immersed in this soup of compositions, scenes, semantic and grammatical combinations that form our visual poetics and that constitute our memory, our collective unconscious, our sense of what is beautiful or ugly, what is good and what is bad, harmonious and conflicting.

I always think about these issues when I see photographs that I classify as “beautiful” or simply “good photographs”, images that I like, that we all like, and that are a long way from being something really new and original. Rather, they are good examples of categories that are already in our subconscious. These are ready-made images reissued for the nth time. They are applications of canons that we have already internalized. This can sometimes give the uncomfortable feeling that we are “copying”, that “someone has already done this” or simply that “we are not innovating”. As if innovating was a must and not innovating a failure. On the other hand, this must be one of the good sides of photography, that is, allowing a collective work that, due to its very slow transformation, ends up serving as a solid source of references. I think it is this ordered, classified, organic ocean that offers us a north, a description of the world and allows us a certain peace in the midst of what would otherwise be sheer chaos. 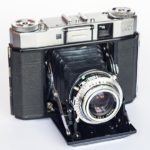