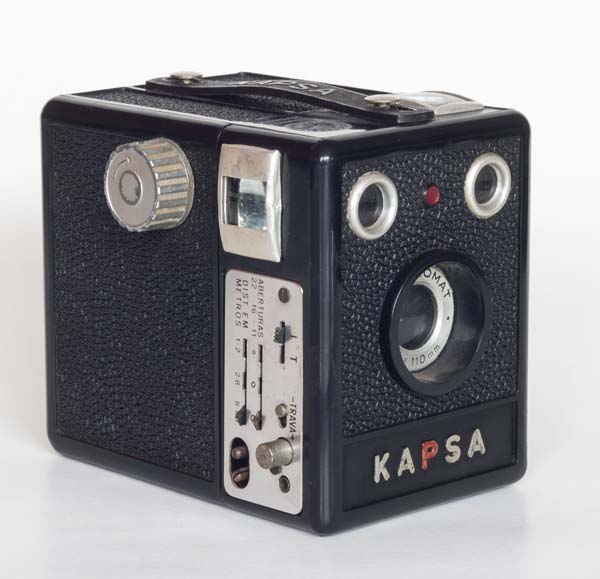 Kapsa is a camera that uses 120 roll films. It was manufactured in Brazil in the 1950s by D. F. Vasconcelos. Following the box camera concept, it is an amateur device, basically to make travel and family photos, preferably on external ones. In this category it performs well and with a frame of 6 x 9 cm allows easily contact prints. 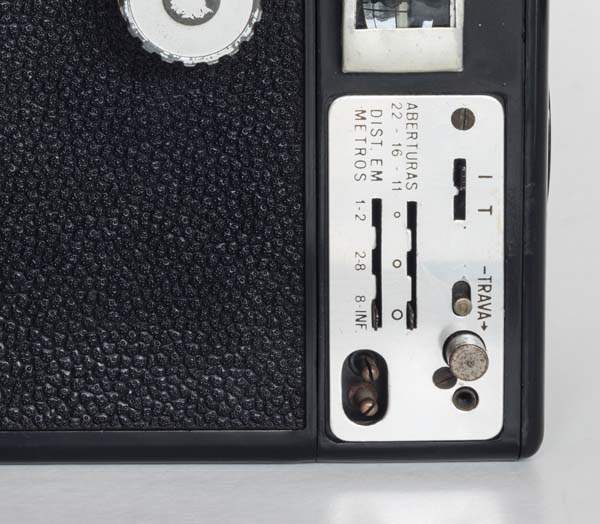 This is the “red dot”, the most sophisticated of a line with three models. The photographer’s choices are three apertures, f 11, 16 and 22. Three focus areas: 1 to 2 meters, 2 to 8 meters and 8 to infinity. For speeds it offers 1/100 and B, as I of instantaneous and T for time. But it still has a lock and flash contact.

Another interesting option is the choice between 6 x 9 cm or 4.5 x 6 cm, making in these formats 8 and 16 photos per 120 film, respectively. The film advance is controlled by red windows on the rear of the camera and there is one for each format. Inside the camera two tabs are folded to one side or the other and hence closing or opening for the entire frame (6 x 9) or half frame (4.5 x 6).

The construction is robust and it is very easy to find perfectly functional Kapsas. D.F.V was a high-tech company and made microscopes and other scientific instruments, especially in the military and medical areas. They would certainly have the staff and technology to manufacture something more sophisticated, but Kapsa was certainly a more of market-choice option than any other limitation. 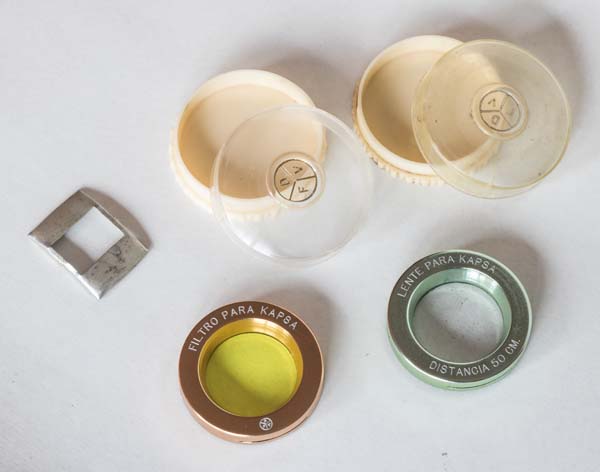 As a box camera, one could not expect a great line of accessories. But it was offered some colored filters and also a close-up lens for 50 cm.

In the photo above we also see a viewfinder mask that works when half frame is selected. There are two viewfinders, as it was usual in box cameras since the first ones like the Kodak Brownie # 2, one for landscape and one for portrait orientation. Depending on the light conditions, it is not easy to frame with these viewfinders. A good practice is to point the camera to a silhouette against a clear sky (buildings or trees, for example) and adjust your eyes, to recognize the scene in that situation, and then turn the camera to the scene you want to capture, without removing your eyes from the viewfinder. 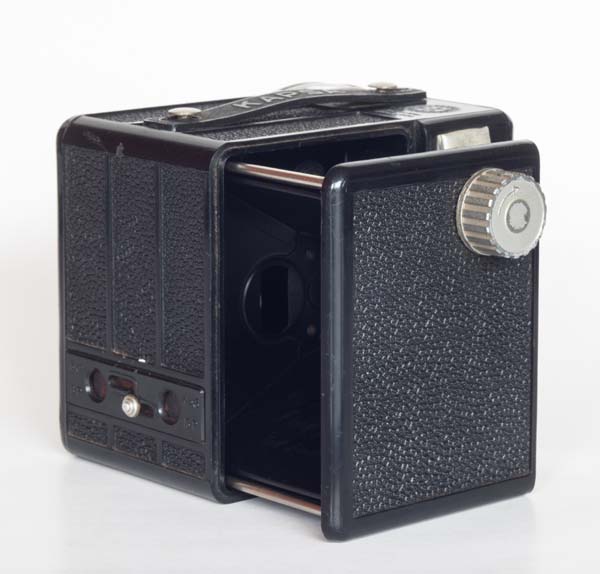 The lens is a doublet, which is certainly a luxury for a box camera, which usually only use a meniscus, and it could be among the best of the category if it were not for a really incomprehensible detail in the project: To load film it opens sideways. The drawback of this arrangement is that we do not find in it the plate that normally compresses the film against a frame and helps to keep it flat. The only aid to keep the film flat is the tension applied to it. This is not enough and I’ve had the experience of noticing, after film development, that it was not flat inside the camera, deforming the image and losing focus.

When I go out with a box camera, I usually do not plan on taking very accurate pictures as this would be frustrating. Here are two examples of some variations on the theme. In the first photo I used double exposure, since the camera has no protection against it. In both cases I printed on Foma Classic paper using development by infection, also known as Lithprint. An almost exhausted developer is used, a very long exposure in the enlarger, and the development is equally prolonged until the image comes. What is characteristic is that the image takes a lot of time to show up, it seems that nothing will come, you linger in the red light looking at a white paper for at least 10 minutes and suddenly, the density begins to rise, rise and if you do not take it out at the right time it may turn almost all black. 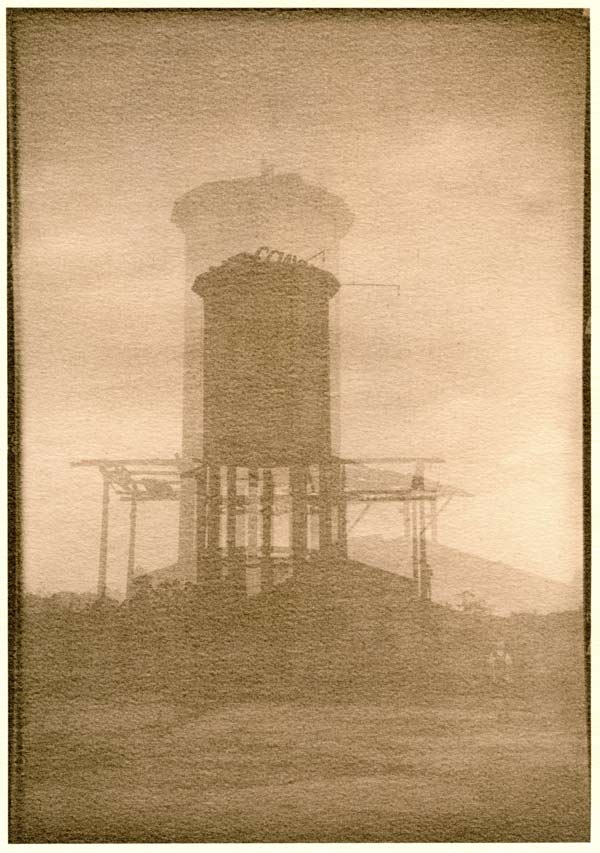 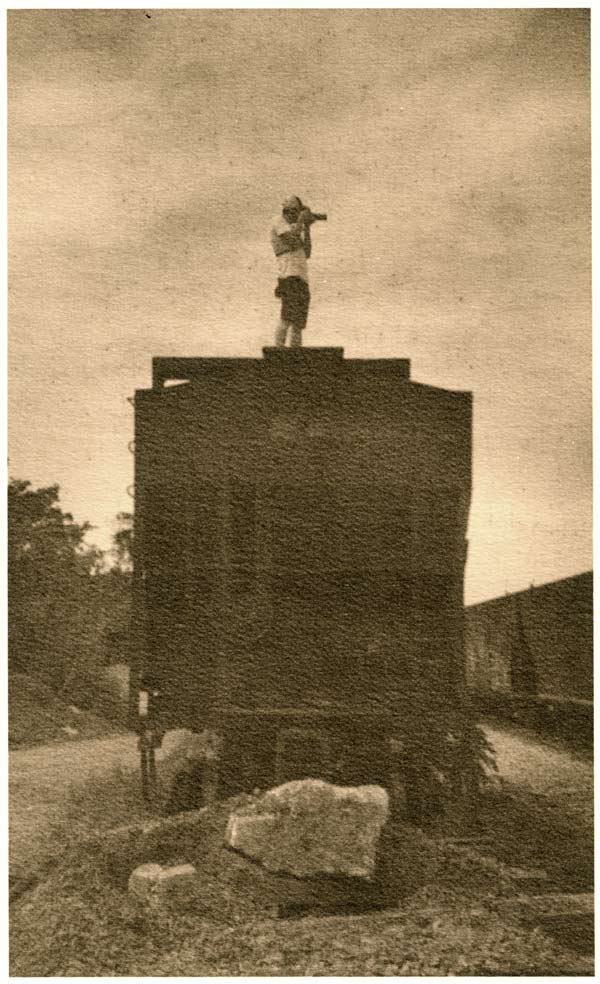