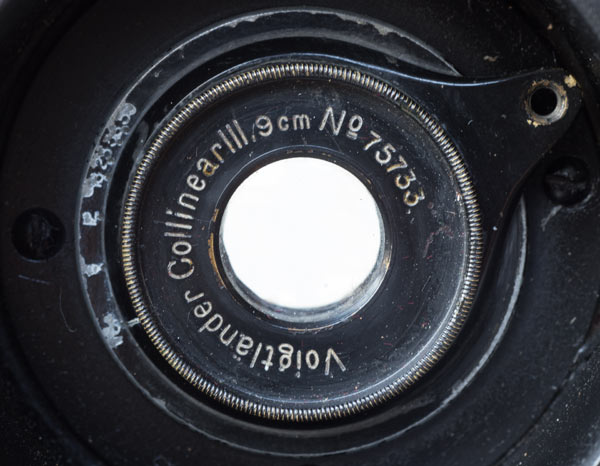 Among the various evolutions towards a sharp image, with reasonable viewing angle, good aperture and flat focal field, a milestone in the history of optics that can be easily recognized as such was the appearance of anastigmatic lenses. These are, as the name suggests, those that corrected astigmatism. Stigma means point. Optical aberration astigmatism means “no point”, that is, when it is not possible to generate a point image from a point in the object. The word “anastigmatic” articulates a double negation: “no – no – point”, this was the way to announce a lens finally capable of generating a point image of subject points, even on the periphery of the image.

Unlike the Petzval lens or the Rapid Rectilinear, this was not an only opticians’ feat. Practically everyone in the business had already a good idea on how to solve the problem, all the big manufacturers already knew the basics of an anastigmatic lens design. What they lacked was a glass with the necessary characteristics to build such a lens. It would be a crown-type glass with a high refractive index. This glass came from Jena in Germany. In 1884, Otto Schott in partnership with physicist Ernst Abbe, who worked for Carl Zeiss, developed the new glass that would allow the breakthrough. Zeiss was obviously among the first to launch anastigmatic lenses. But immediately the glass of Jena was ubiquitously adopted and thus came the famous names like Protar, Unar, Planar, from Zeiss, Dagor from Goerz, Stigmatics from Dallmeyer, Orthostigmat from Steinheil and, exactly, the lens of this article, Collinear or Kollinear, from Voigtländer. 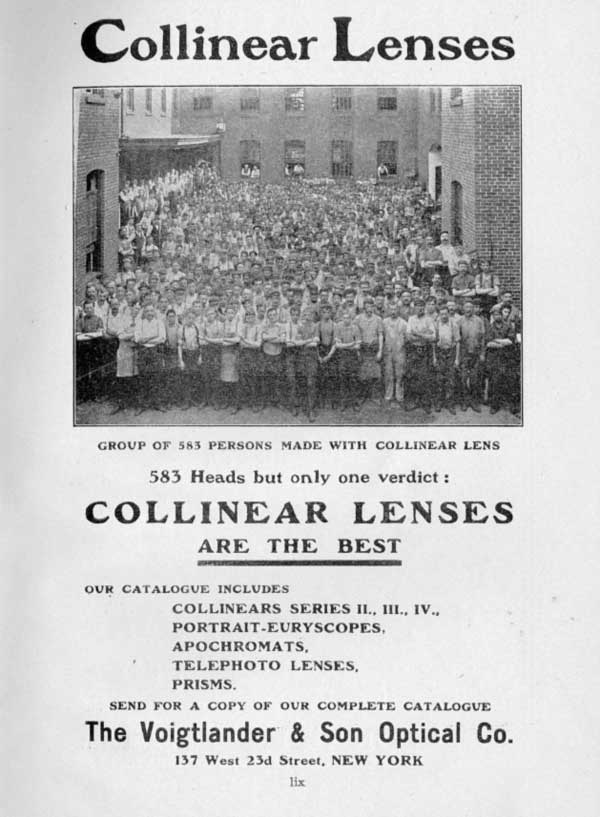 Since the beginning of photography, with the introduction of Petzval’s lens, lenses with a soft focus, in the whole or the periphery of the image, were appreciated for portraits. They were known as artistic optics. But a photo like that above, which appears in “The American Annual of Photography (Times Bulletin) for 1904”, would be practically impossible without an anastigmatic lens. Using prior concept lenses, even a Rapid Rectilinear, sharpness across the whole image would only be possible with a very small aperture and impractical in group photography, no matter how collaborative and static a living group could be. 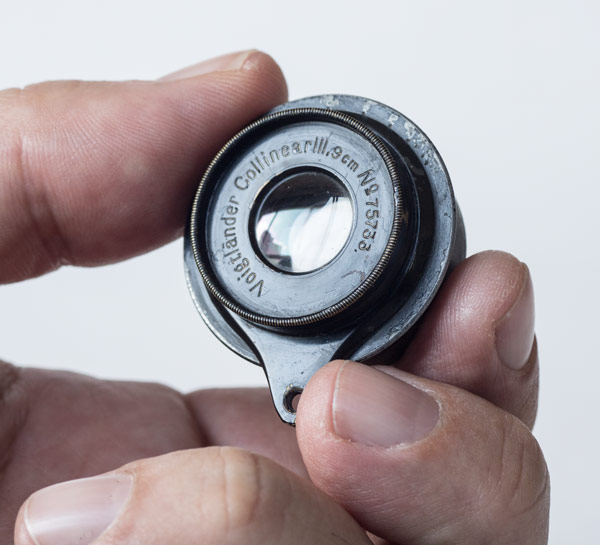 The design was patented in 1893 (Vademecum pag 306) or, according to Kingslake, in 1895 (page 95). Like Goerz’s Dagor or Steinheil’s Orthostigmat, which had already appeared about two years earlier (it was all very fast at those times and the sources are not always in agreement on dates and forerunners), Collinear takes advantage of symmetry. There are two identical groups, three cemented lenses, placed symmetrically in relation to the diaphragm. 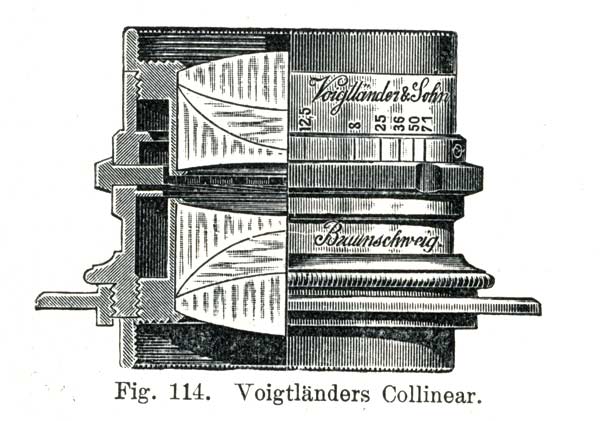 Collinear, which sometimes appears as Kollinear, was manufactured in four series differentiated by the maximum aperture going from f/5.4, the brightest, in the series II (not well praised for image quality while wide open), up to f/12.5 in the series IV, a wide angle covering impressive 100º. This one, the lens in this post, is a Series III with maximum aperture f/6.8. On the its scale we read the figures f: 6.8 – 9 – 12 – 18 – 25 – 36 – 50

They were manufactured at many focal lengths between 6 and 58 cm (Vademecum). This is a small 9 cm (90 mm) and was manufactured in 1904, accordint to its serial number. Probably equipped some detective-type camera with a shutter, which was very fashionable in those days. 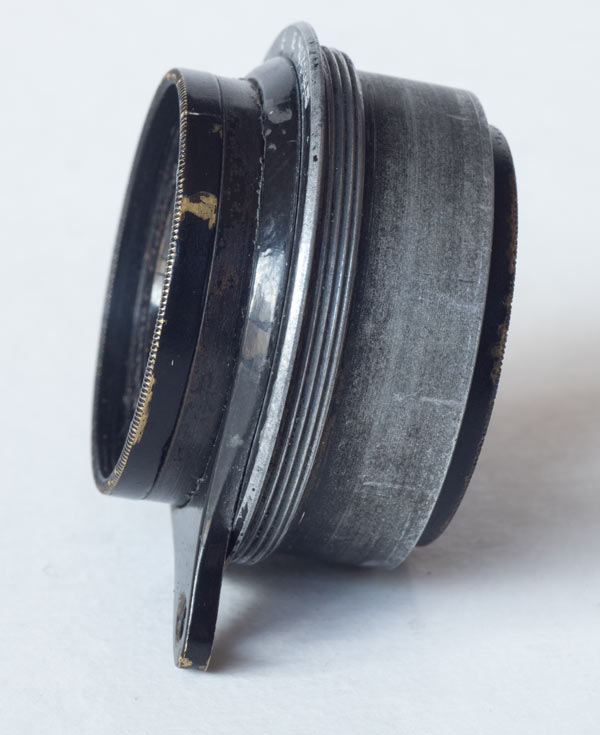 I suspect that due to the type of body construction that puts the thread in a position that leaves most of the lens’ body inside the camera. This is usually done to facilitate focus on infinity in short lenses. As this is a 9 cm that covers 9 x 12 cm and needs a shutter, I imagine that it was intended for a specific camera design and not a generic barrel lens. Maybe it was for a klap camera. 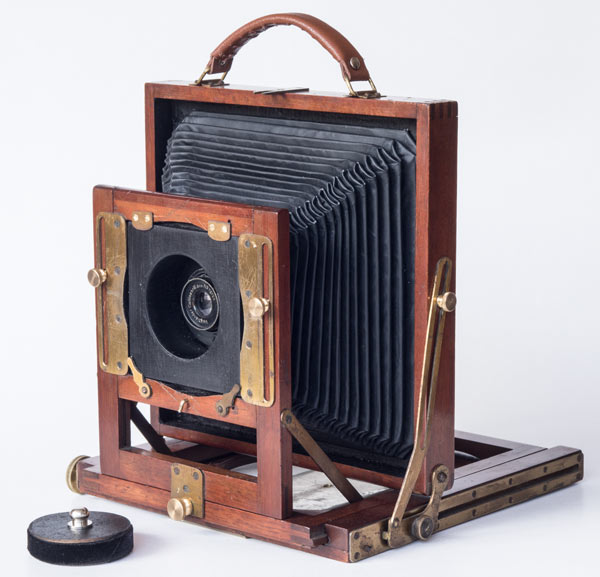 I set it up on a Thornton Pickard customized for 4×5. Originally this camera was intended for a bit larger film holder, but as it received a back homemade to be able to use standard holders, it works now with 4×5″ or 9×12 cm sheet film. 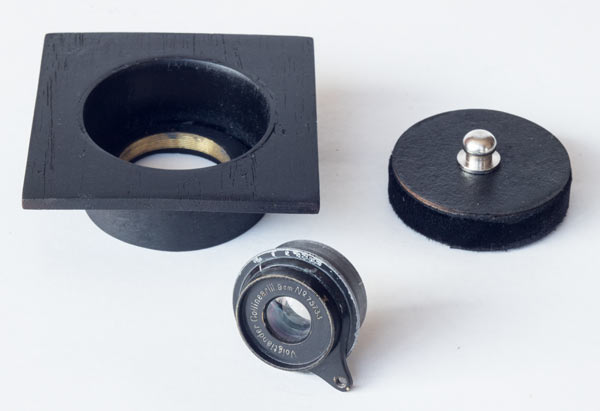 The consequence is that even bringing lens board and film to the closest position, it is still too far away to focus on infinity. For this reason I built recessed lens board so that the lens works even in a camera that is a little big for it. I took advantage of the recessed board to make the shutter (lens cap) that appears on the right in the photo above.

To try it out I made a photo thinking of exploring the good angle that the lens embraces and the correct perspective that it yields. I placed the camera on the floor in the position shown in the picture below. After framing and focusing I closed the lens until the entrance pupil was more or less 2 mm. As the focal is 90 mm this gave me an aperture of f/45. I used this method because I still need to take a look at this scale used by Voigländer and understand its logic and relation to current f stops. 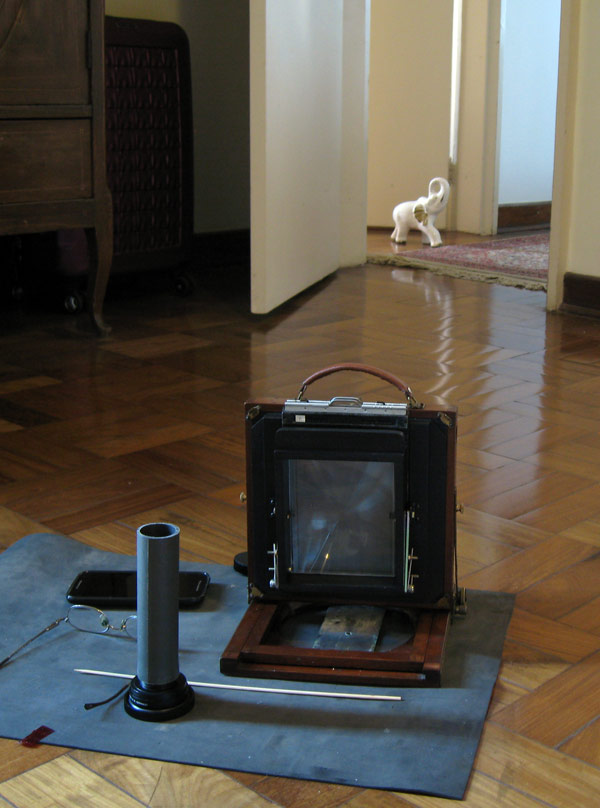 The film was a 4×5″ Fortepan 200 ASA, developed in Pyrocat HD and the result was the photo below. I used a front raise of  1 cm in order to lower the horizon line a little and this created the vignetting on upper corners. I calculated the angle of vision considering that it would be, when in the axis, covering a 4×5″ sheet, without room for movements. The diagonal for this format (~ 100 x 125mm) is approximately 160mm (see an online calculator on this page). With 90mm focal length and 160 mm image circle we can calculate (this page) that the viewing angle is 83º. So we can call it a decent wide angle. 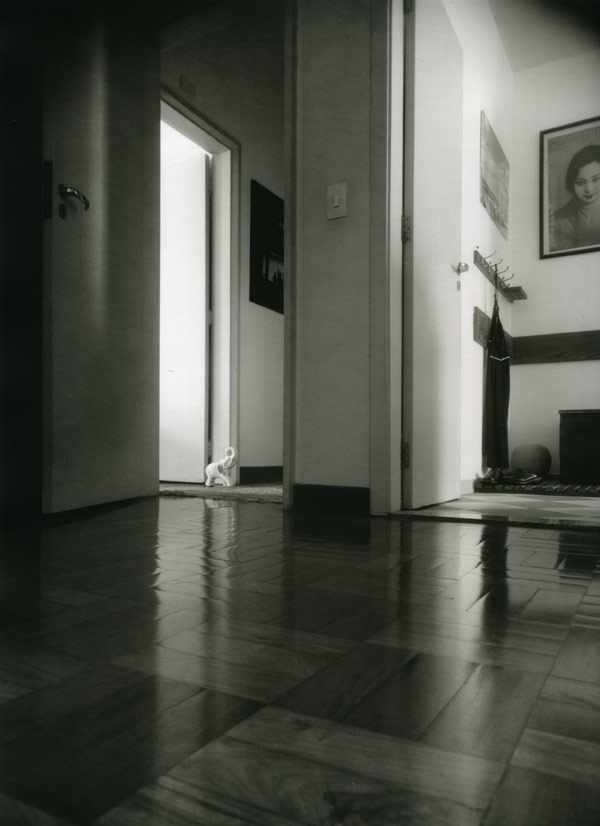 The image above is a scan of a 24 x 30 cm print on Ilford fiber mate paper. It can be argued that f/45 is not an aperture that says a lot about an optics, or that the lens would need to be too bad for not working well even in such a low aperture. But the goal, before testing the optics, was to make with it a nice picture. I do not know to what extent the familiarity with this room and these objects weighs in my evaluation … but I enjoyed it very much!