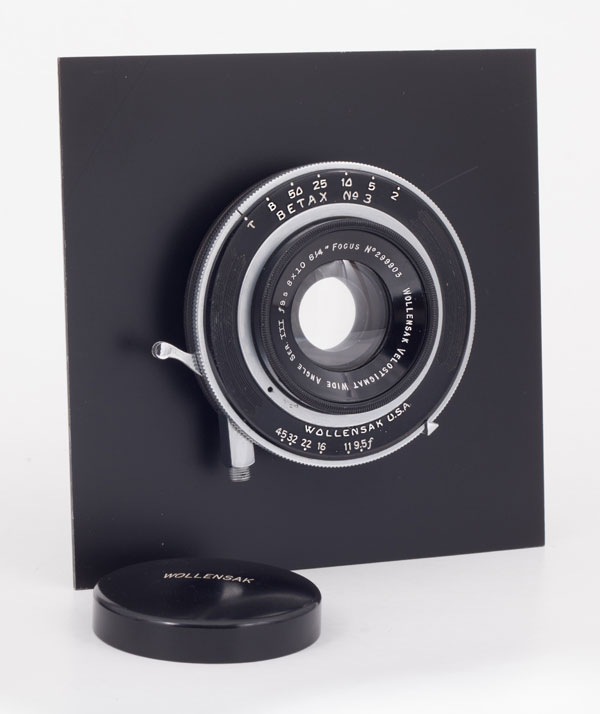 This is a wide angle lens with 159 mm focal length (6 ¼ inch) lens that can cover a picture of approximately 20 x 25 cm (8 x 10 inches). If we calculate the circle of image for such format we find 32 cm. Calculating the angle of view for this image circle and focal length we find an angle of exact 90º. The maximum aperture of f/9.5, although it may seem a little modest compared to more common lenses, for such an angle of view is something very impressive. The entrance pupil must be ~17 mm in order to give f/9.5 with a focal length of 159 mm. These characteristics are quite good, even if compared to a modern lens. However, the design of this Velostigmat is from 1902. 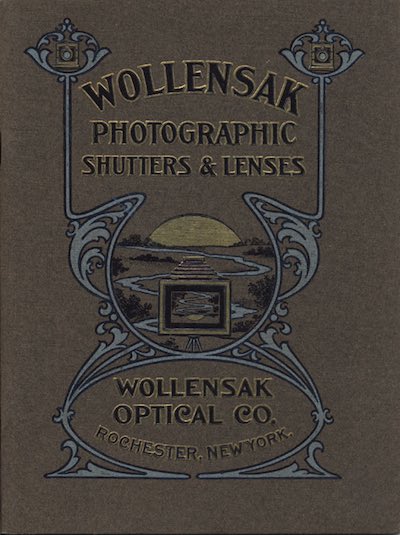 It was introduced by the Rochester Lens Company under the name of Royal Anastigmat Wide Angle. This company was acquired by Wollensak which became owner of intellectual property for all its designs. The 1906/7 catalog (whose beautiful art nouveau cover is reproduced above) still listed the lens with its original name Royal Anastigmat, which was soon after changed to Velostigmat. 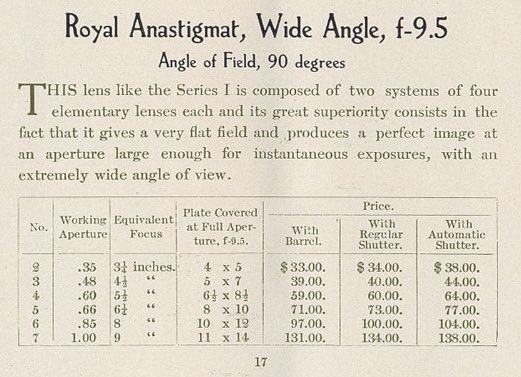 The highlighted features are:

Angular lenses, since the beginning of photography, have always had their most significant field of application in nature or architectural photography. They were known as landscape lenses and in the beginning consisted only of an acromatized doublet with aperture around f/30. They were also known as French lenses because the first lenses used by Niépce and Daguerre were of this type. Perhaps the most famous manufacturers were Charles Chevalier, Lerebours et Secretan, since they actually equipped the first cameras, but soon afterwards came many others like Hermagis, Jamin, Gasc et Charconet, but all predominantly French. Many manufacturers in other countries also adopted the design, but the name was already consolidated as French lens.

The problem with the achromatic dubletos, French lenses or even simple lenses, as they are also called, is that in addition to the very small apertures they suffered from aberrations that curved the straight lines of the monuments when they were more towards the edges of the image. This problem is called curvilinear distortion or radial aberration. When the diaphragm is in front of the lens, that combination tends to bring points which are farther from the center of the image closer to the center (fig.22 below). In this case a square will take the form of a barrel, hence the name barrel distortion. When the diaphragm is behind the lens, the points on the periphery of the image are further removed from its center, and the distortion resembles a figure that refers to a cushion (Figure 23). The name is pincushion distortion. When, instead of a single lens, two lenses are arranged symmetrically with respect to the diaphragm, one compensates for the effect of the other and what we have is the correct image (Figure 24). Dallmeyer’s Rapid Rectilienar, launched in 1866, is considered as the inaugural lens of this idea that was extremely fruitful in the history of photographic lenses. The term rectilinear alludes precisely to the correction of radial aberration. The illustrations below were taken from J.Trail Taylor’s The Optics of Photography and Photographic Lenses. 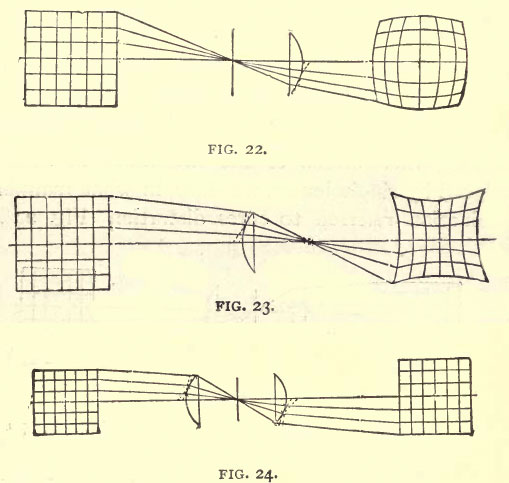 For this reason most of the wide-angle lenses of the nineteenth century are symmetrical. Even when other asymmetrical designs were developed, many lenses still held the solution by simple symmetry. Velostigmat Wide Angle is still an application of this principle. 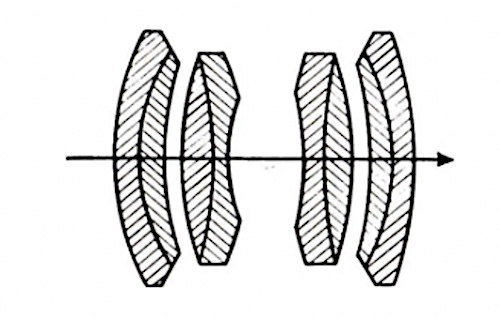 There are eight elements in four groups, that is, two cemented doublets  on each side of the diaphragm (above). Its design had a second start. It can be noticed that it corresponds to what is marked in the diagram below as Raptar Wide Angle f/9.5, as this is the name that replaced Velostigmat after the Second World War when these lenses started receiving an anti-reflection coating invented by Zeiss, from Germany. 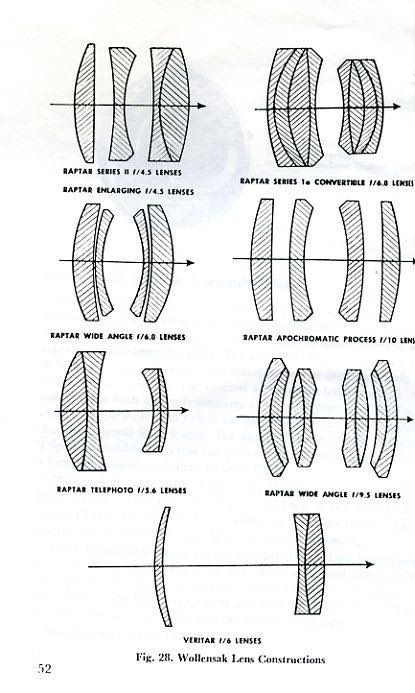 As a comparison, the drawing below is a contemporary wide-angle lens, the Schneider Super-Angulon, which is offered at varying focal lengths, covers angles from 90º to 105º and apertures up to f/5.6. The viewing angle is similar to that of Velostigmat, the brightness is 4 times larger. But these are very large, heavy and expensive lenses. Note that there are 8 elements in four groups too, but there is no more complete symmetry. 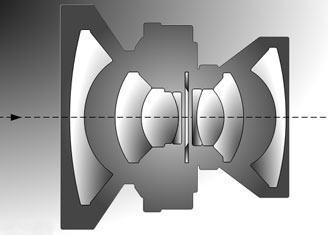 Wollensak lenses are hard to date and even names do not say much. Velostigmat named several different optics and Raptar, as we see above, went the same way. Even the rule, Velostigmats don’t not have coating while Raptars have, is not totally valid because Velostigmats with coating, probably of a transitional period, have already been located. It is said that the name Raptar was chosen through a contest launched in Popular Photography magazine in 1945. Judging by the finish and state of this lens, I believe it is from the most recent periods. However, there is no record of serial numbers and their rationale regarding years of production. 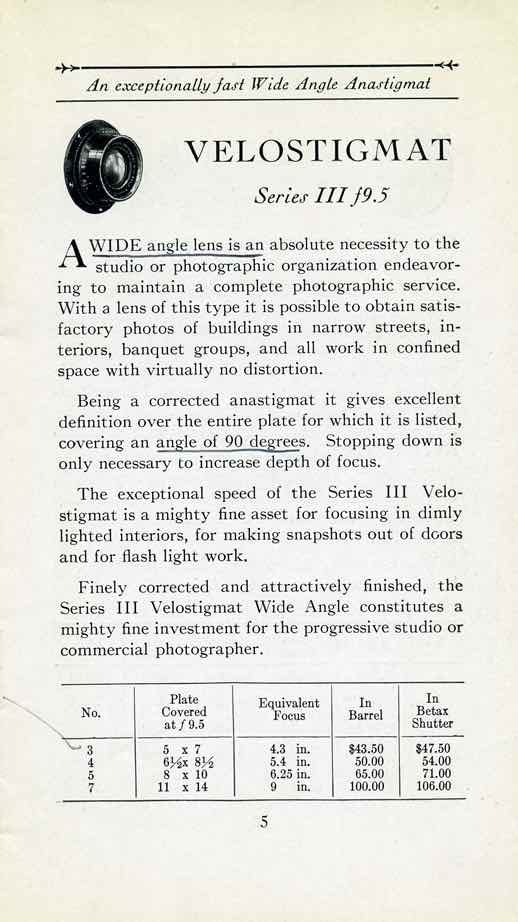 Above, a page of the 1935 catalog in which a Velostigmat, in barrel, is presented and the same features highlighted: speed, 90 ° angle and definition over the whole field.

The problem with Velostigmats and with all of the older wide angles is the lack of coating. The design itself is very good. The anti-glare becomes critical in angular lenses because the light falls very obliquely when the angle of view is important and precisely in these cases the fraction of the light that reflects instead of penetrating or emerging from glass is considerable. It generates a large amount of light rays that will not contribute to form the image and instead will reduce its contrast by spreading in a disorderly way on film’s surface. This is much more critical in wide-angles than in long lenses in which we have a predominantly more frontal incidence, as in the case of a portrait lens, for example.

To minimize the effect, one must avoid very sharp contrasts, including light sources such as the sun, reflections of sunlight, backlights and similar cases. This excessive light will certainly spread also through the shadow areas. But what is technically a defect can also be used in favor of a specific aesthetic conception. This scattering of light around bright areas is known as flare and can provide a certain materiality to the light that turns out to be interesting in some cases. 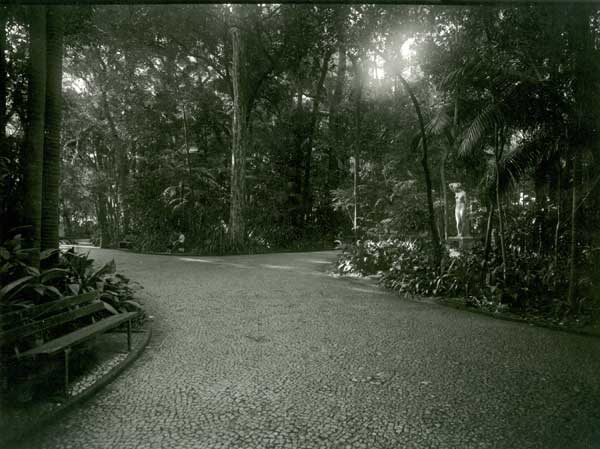 Above we have a scan of a 18 x 24 cm contact print on Ilford Fiber Mate paper. It illustrates a case of lens flare when the light from the sky is filtered through the treetops and invades the shadow of the leaves. Some details: 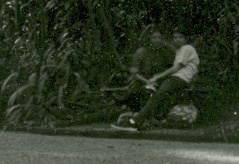 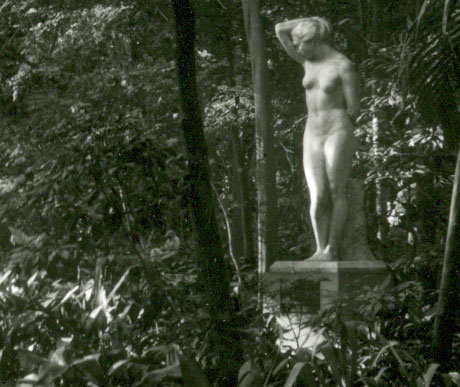 A Raptar with antireflection treatment is undoubtedly something more desirable than an old Velostigmat or the even older Royal Anastigmat. More recent lenses, such as the Super Angulon, have a much better performance in every way, no doubt about it. But considering that this Velostigmat it’s an 8×10″ lens, with a 90º angle of view, that it really fits in the palm of the hand, that its aperture, f/9.5, is not huge, but just enough, limit maybe, for framing with some easiness on the ground glass, it is really a very interesting lens to have and use. 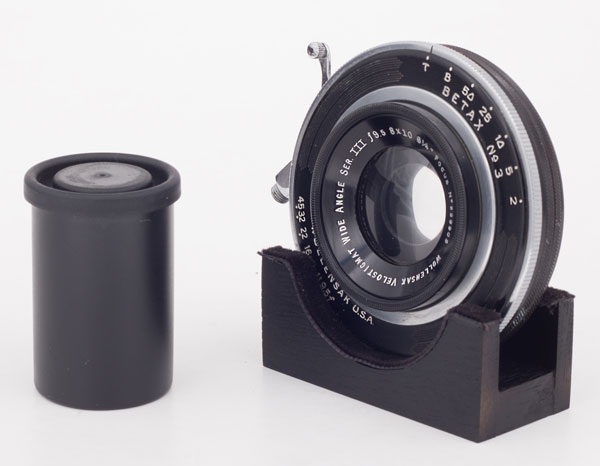 Sources: Most of the information I put in this article came from a thread I started at the Large Format Photography Forum to comment and discuss Velostigmat’s lens flare. Many thanks for those who collaborated. This is the link to this thread.

An excellent source about Wollensak lenses and  shutters one can find on this link. As part of the same Compendium there is a table with serial numbers. In some cases it is very helpful, but for this Velostigmat with serial 9903, unfortunately, I could not arrive to a final conclusion about its year of production. I set it between 1921 and 1945 considering its Betax nº3 shutter and the fact that later only coated Velostigmats, now named Raptars, were produced.

Images from Wollensak’s catalogues came from Camera Eccentric, an excellent source for researchers on the topic of historical photographic equipment.