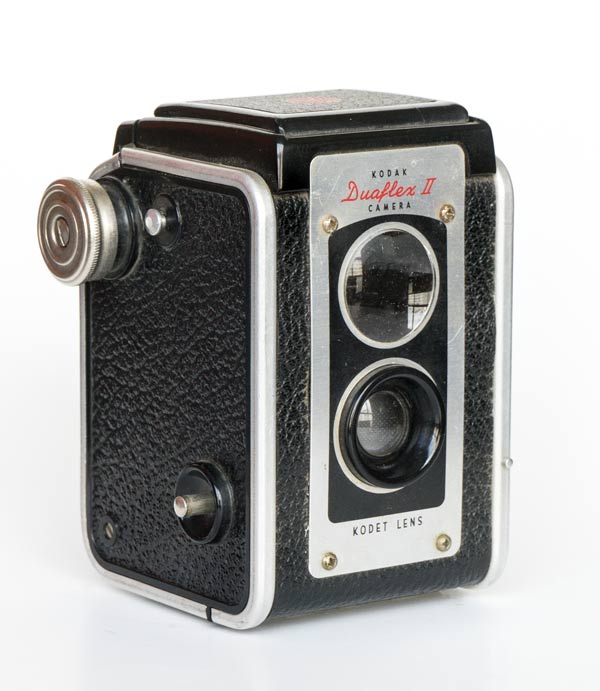 This is another one of hundreds or perhaps thousands of medium-format amateur cameras that Kodak has produced throughout its history. Some sites classify Duaflex as a pseudo TLR (Twin Lens Reflex). This is well founded because the lenses are not equal, not even similar, to support the “twins”. The viewfinder lens does not focus on ground glass such as Rolleiflexes or Yashicas. It has, in fact, only one large optical viewfinder with a mirror to be seen from above. It is also argued, to disqualify it as TLR, that the lenses are not coupled, which probably means that when moving one, the other does not accompany it. But then maybe it’s an injustice, because in Duaflex II, none of them move, the focus is fixed. It can thus be considered that they are coupled while fixed lenses.

Anyway, the display is very bright and has a good size. I even think with it it’s easier to frame than with any true TLR. 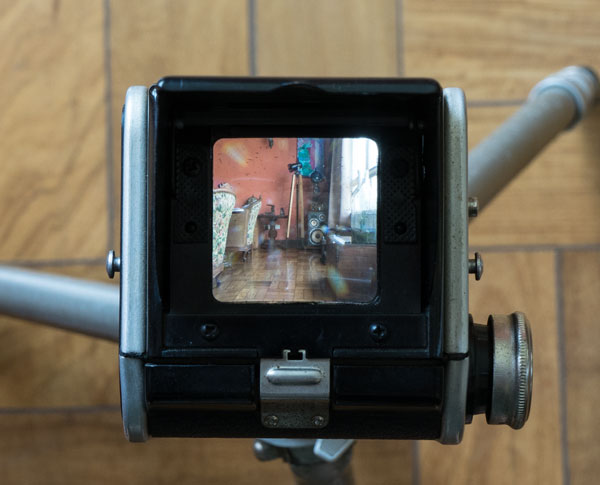 The film used is the 620. Incomprehensible to me how Kodak has released such a similar but incompatible film with the then well-established ~50 years old 120. That  would be one more point in common with the rich cousins TLR. But they picked this pseudo 120 film called 620. 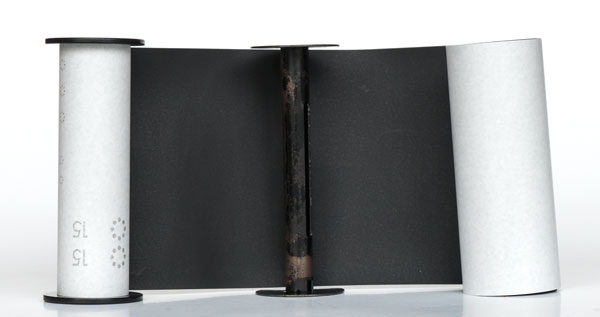 In the picture above the left roll is a 120 film, still manufactured, the center reel is 620. The film and the backing paper are compatible. It is possible, if you have two 620 reels, simply pass the same paper and film from 120 to the 620 reel.

It is not possible to place the 120 film with its original reel in a Duaflex camera or another one that uses 620 because this second one is a little lower than the first one. It can be seen in the photo above that because it is all metallic this reel ends up being lower externally.

The process for rewinding a 120 consists of 2 steps performed in complete darkness.:

Attention to one important detail: In the first step, you will have the taped, glued side of the film coming first. This is easy, it will be guided and wrapped normally on the second 120 reel. But in the second step the end of the coming film will be loose! You’re the one who needs to engage it correctly on reel 620. Do this by trying to make the film always stick to paper. Do all this operation always leaving film and paper tight and no gaps between them. If you leave any gap , when you get the adhesive taped end of the film there will be film left over. If it’s just a little, it’s not serious, you can gently peel off the sticker from the paper and let it settle and glue half an inch further on the paper. The important thing is that the roll is tight and clear.

The camera opens, like the TLRs, from the rear edge of the top of the camera. It can be a little difficult as the lock (at the bottom of the photo above) needs to be pressed down to disengage, while pulling the entire cover to rotate back from the opposite edge. The problem is that the force to lower the lock has the effect of forcing the lid to hinder its movement. You release the lock but unwillingly hold the lid. It takes a little training and patience. 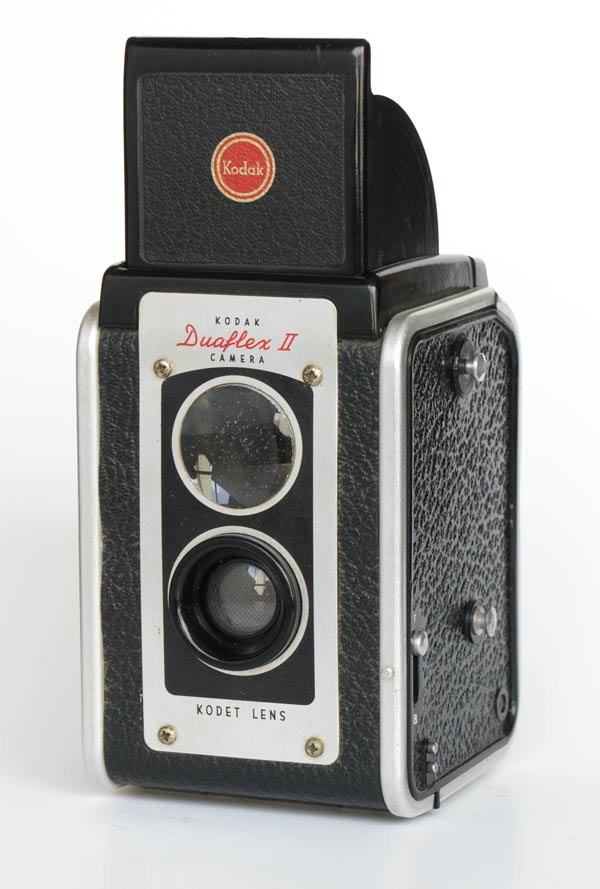 The lens is a 75 mm f/15 called the Kodet. It is apparently just a meniscus, ie a simple concave lens on the inside and convex on the outside. It is the small opening that cuts out the inevitable aberrations of such a simple construction. The shutter has options B (open while you press) or I for snapshots, with a  fixed speed. 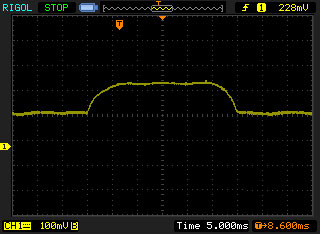 In a test with a photo diode connected to an oscilloscope I found that the shutter is 25 ms open. In the picture above we see the moment when the voltage starts to rise and also when it starts to fall on the diode while there is light passing through. The equivalent fraction is 1/40 s, which is a more or less standard speed for this type of camera. Fast enough for hand held shots but a bit slow if the subject moves. For example, a person walking across the lens axis will come out a little blurry (see photo below).

Duaflex has a dedicated flash for use with bulbs #5. But I don’t have that one.

Anyway, it’s a camera for outdoor photos, on minimally clear days, depending on the film and development. It’s fully usable these days, as long as you get excited about spooling a 120 film on a 620 reel. Making 12  6 x 6 cm (2¼ x 2 ¼ “) size frames, it’s a good camera for a walk when the conditions are OK. You make an entire roll at the same speed and aperture, and then accommodate possible exposure differences on the scanner or enlarger.

Below, two pictures made with the sample in this post. 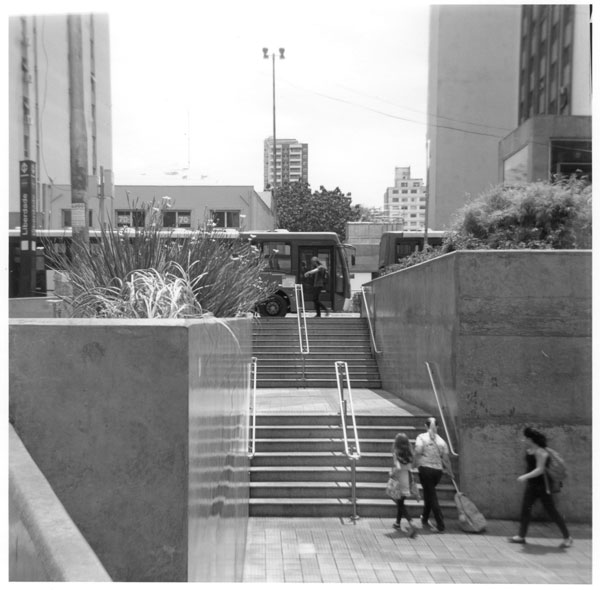 The movie was an Ilford FP4 developed in Pyrocat HD. The print was made of FOMA fiber paper, 20 x 20 cm. The f stop and speed … you already know. 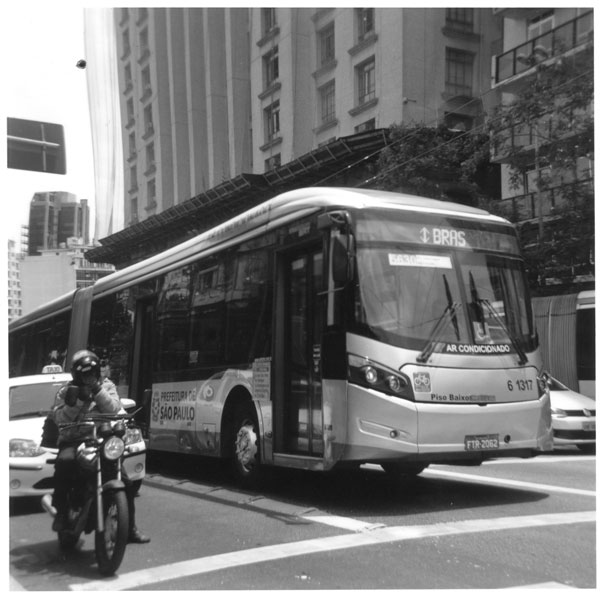