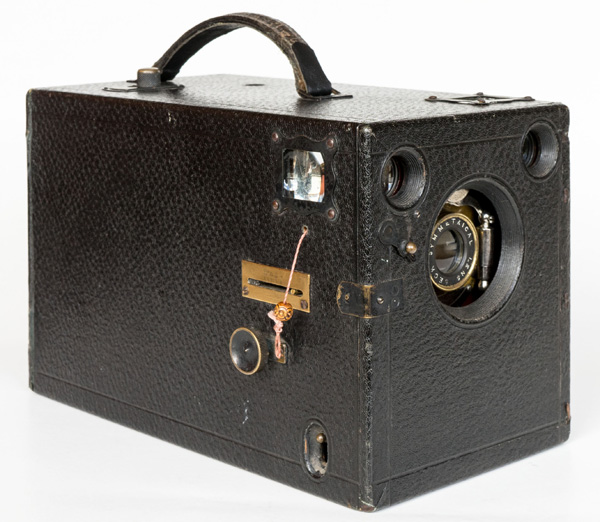 This camera belongs to a category known by several names:

The roll films came at almost the same time. Both are certainly the result of the development of photographic silver gelatin emulsions that appeared in the late 1880s.

In the article on Klito nº3A, I inserted a more in-depth discussion about the implications, the reception of the new gesture and about the English firm Houghton that produced an extensive range of Klitos and that later became Ensign, a famous and important brand throughout of the 20th century. Here I will focus more on this model itself.

Unfortunately I was unable to definitively identify what model this is and its position in the Houghton timeline. Any collaboration in this regard is welcome. It was acquired at the specialized auction house Team Brekker, Munich. In the auctioneer’s description it is dated 1904 and referred to as “original Klito”. But I haven’t found even a single picture of an identical model in web searches to corroborate that statement.

The disguise in black box 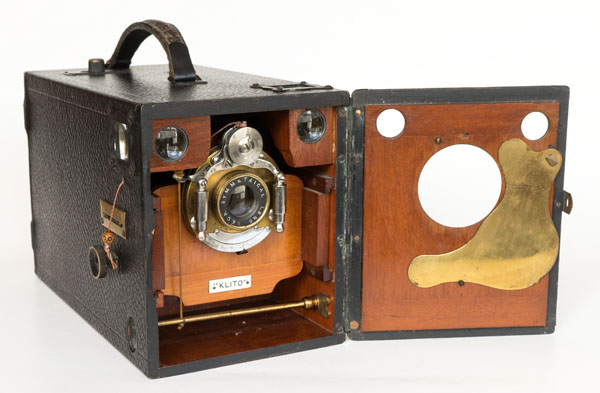 A characteristic of these cameras, which certainly contributes to its fame as a detective camera and indiscreet photos, is that it attempts to hide its function as a camera. When closed it looks just like a black box or suitcase, finished like so many that existed at the time. This is due to that front door. But when opened, it abandons the exterior austerity and presents this luxurious combination of glass, wood and brass.

Inside the camera is an inscription that reads “Klito” only. This is perhaps an indication that it is really one of the first models and that the subsequent ones were the ones in need of some differentiation by suffixes such as 1, 2 3 or 3A.

These cameras had 3 types of focusing in addition to the fixed focus, which also existed in Magazine Cameras, but it is more typical of the first roll film ones, such as the Kodak Brownie nº2. The simplest system was a meniscus or achromatic lens and offered the possibility of sliding an second lens in front of the main objective. The second was a bellows and rack system that made it possible to advance the lens’ panel. That is the option of this Klito. It is possible to see in the photo above that the panel that supports the lens is supported on a wooden rail that allows it to be slid forward and backward, as in a drawer. Behind it is a small bellows that is not seen in the photo. 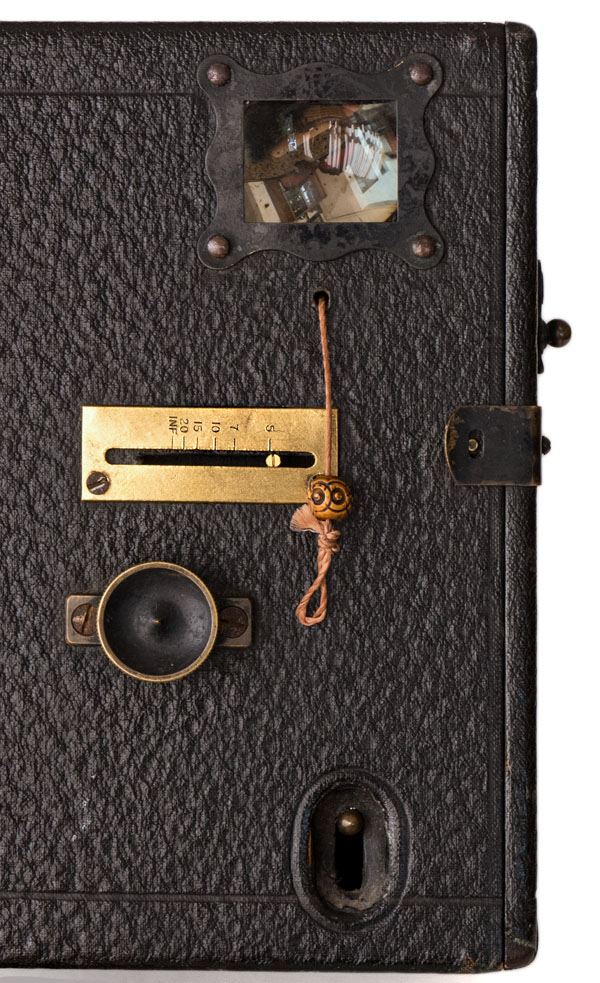 To focus it is necessary to turn the side knob, in detail in the photo above, until the distance evaluated by the photographer is selected on the scale above it, in feet. Remembering that a foot corresponds to 30.5 cm, we see that it focuses up to about 1.5 meters on the mark of greatest proximity.

The nice string that hangs on that same side serves to cock the shutter, discreetly, with the front door closed. The lever at the bottom is conveniently positioned to shoot with the right thumb while the camera is held firmly in the palms of the hands that support it on both sides.

In this focusing system, the camera housing is a single block. The lens panel moves inside the camera housing. But the system that really established itself and from which we see a huge number of other models was one in which the box is split and the bellows is placed between two blocks. This is the case of Klito nº3A, the details of which are shown in the photo below. For this construction we also see the metallic rack joining the two blocks.

In this model we have a lens that should be top of the line for magazine cameras. It is a Beck – Symmetrical, mounted on the elegant Unicum shutter from Bauch & Lomb. By the name we can already imagine that it is a Rapid Rectilinear. There are two groups of two elements, identical and positioned symmetrically around the iris. The maximum aperture is f / 8, normal for this optical concept, and goes down to f/45. As always, a good thing about these closed cameras is that the lens, despite its age, has been protected and exhibits an excellent condition. 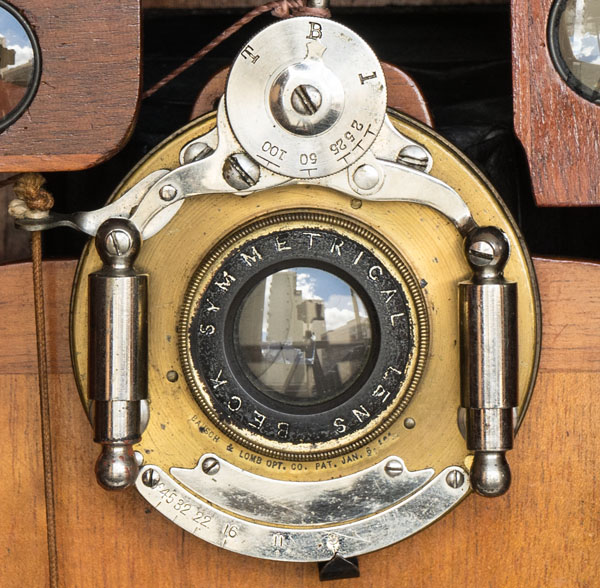 Times range from 1s to 1/100s plus B and T. This means, of course, that the camera also has the tripod threads in portrait and landscape positions. The speeds are not accurate but I prefer not to interfere, as long as it is firing, and just make a table linking the marks on the shutter to the actual speeds that are then used in photometry. On the left piston, you can install a hose with a rubber bulb to shoot the camera from a distance, pneumatically. The piston on the right is the one that produces the delay in closing the shutter for low speeds. 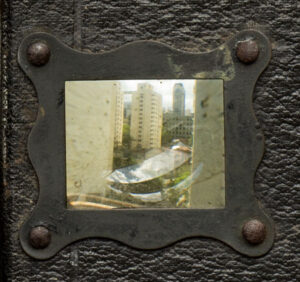 The two viewfinders allow easy framing in well-lit scenes. It is a waist level type, which means that the camera is waist-high and you look at the viewfinder from a certain distance. They are large and much better than what we normally find in box-type cameras for medium format roll films. It is a typical viewfinder for landscape and group photos. Portraits, only at a certain distance. But with the big negative, the enlargements give ample scope for cropping. 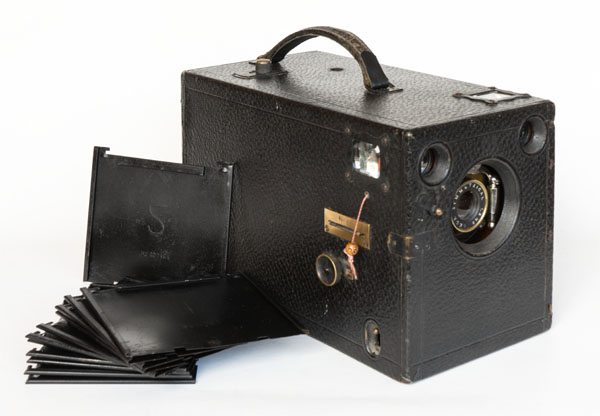 This is a camera for glass plates. It comes with 12 metallic holders, which allow you to securely hold a glass not much thicker than 1 mm. There are a few dry plate suppliers today. One of them is: Pictoriographica, and the good news is that they cut to size. This camera uses an unusual 3 ¼ x 4¼” format. But ideally, you should measure your camera exactly before ordering.

Another possibility is about learning how to make your own plates at home. There is a lot of literature available online, for example, the website The Light Farm. more effective for a quick start is the George Eastman Museum, in Rochester, which regularly offers workshops teaching this technique. It is very rewarding to make your dry plates but it can be a little frustrating if you start without guidance from those who already know.

Another option is to use X-ray plates. For that, one way I tried,  and it worked very well, was to cut 1 mm black PS sheets(Polystyrene) and the X-ray film, exactly in size. The PS is used to support the film and when inserted together in the holder they get both stuck in it. The advantage of X-ray film is that it can be cut under red light and costs very little compared to photographic films. 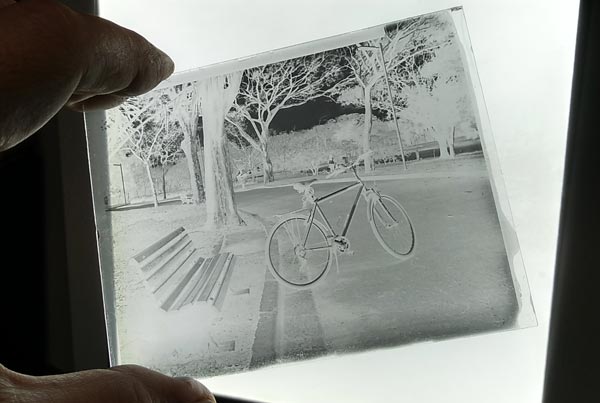 The dry plate has the charm of being something authentic but it will almost certainly require the use of a tripod as its sensitivity is generally low. The X-ray has the disadvantage that its double sided emulsion takes some of the optics definition away and its processing is very delicate when done manually. Trays, for example, almost always result in scratches. On the other hand, it can be used as ISO 100, depending on the developer used. 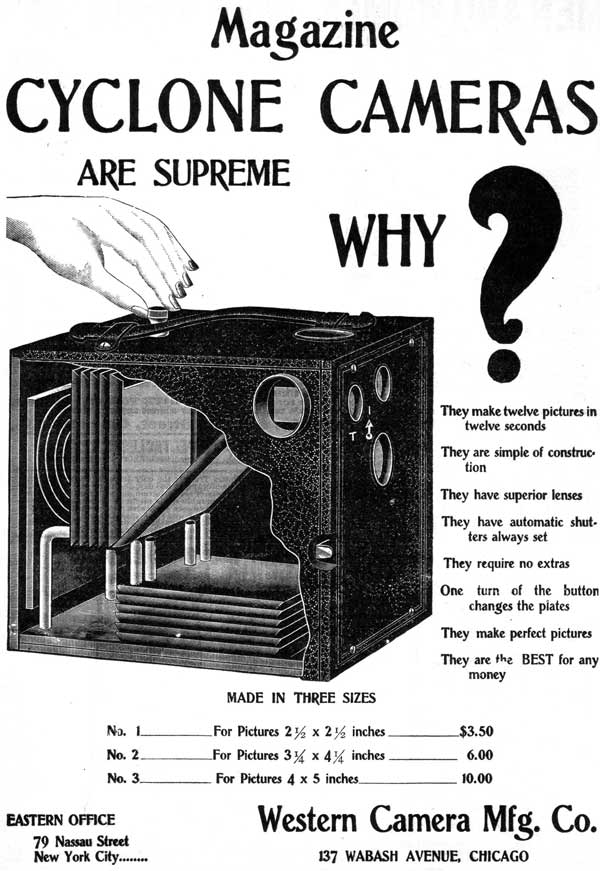 Above is an advertisement for another camera, Western Mfg’s Cyclone. Co., it is much simpler than this Klito, we see that it has a fixed focus, but the illustration serves well to show the advancement system of the plates because it follows the same principle. 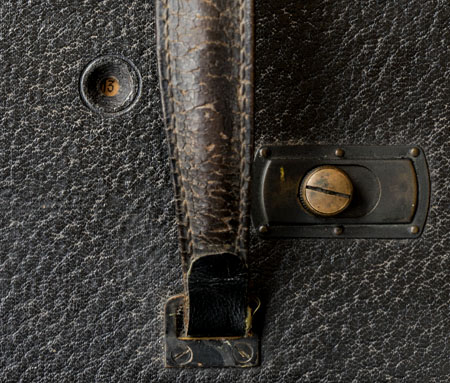 By pressing this button at the top of the camera, sliding it to one side or the other, the plate in front of the camera falls and will form a pile of plates exposed on the floor of the camera box. The next plate is retained for the next exposure.

In the case of this Klito, the hollows on the top of the holder are alternated, so that with just one movement we release a plate and already attach the next one. But that implies paying close attention to intercalating the plates when loading the camera. They are marked with numbers 1 and 2 for this purpose. But in other cameras, I believe that more recent than this, including new Klitos, gave preference to not requiring this alternation but in compensation it is necessary a double movement to release the exposed and leave the next plate attached. 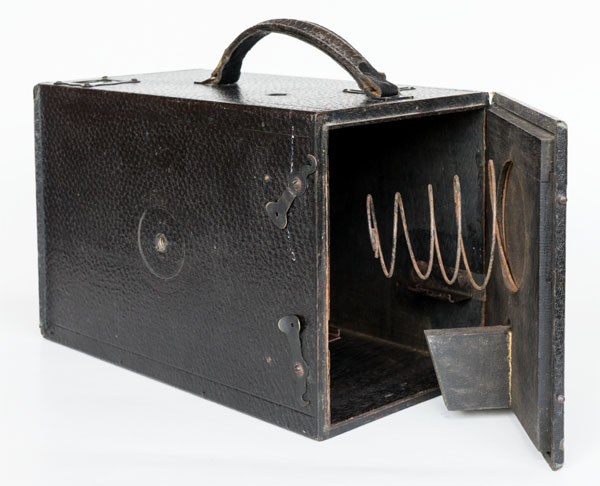 For the new plate to come into position, there is a large spring on the rear door. The first time I saw this system I imagined that it would be very prone to mechanical problems, it just didn’t look like it would work very well. But even in these very old specimens and already showing oxidation and loss of initial luster, everything works very well and so far I haven’t had a single problem to advance the plates.

In general I think that this type of camera is a great option for those who want to take analog photography in large format. Here are some points to consider:

For all these reasons, I believe that these cameras are unfairly disregarded by analogue photography enthusiasts who could have a good companion with them to record their moments. And maybe even, for their bizarre look, they can be again used as Detective Cameras, for candid shots. No one will suspect it.

Below are some photos taken with this camera and dry plates that I prepared at home. I photographed as ISO 6, but this is very relative since the light-meters are calibrated for pan-chromatic films while the recipe I used is much more sensitive to UV, blue and a little bit of green. These are scans from prints on Foma 112 fiber paper printed in the 15×20 cm format. 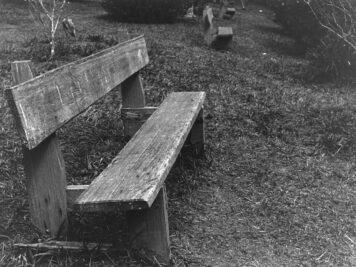 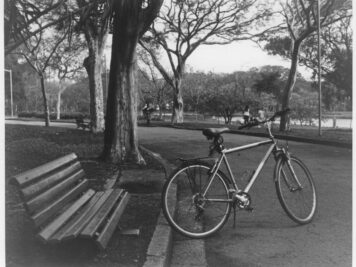 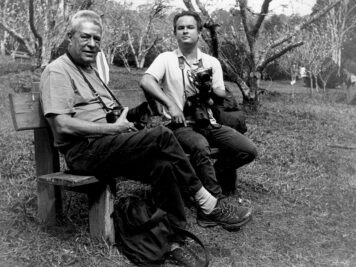