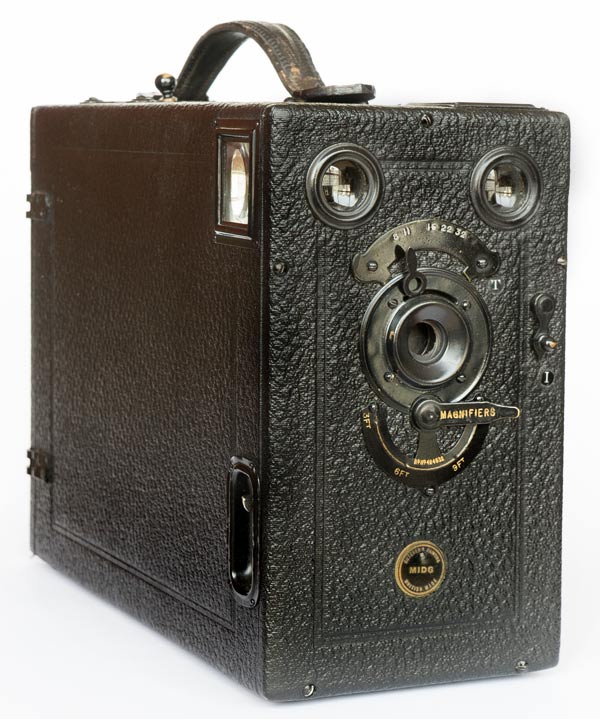 This is a photographic camera for 12 glass plates in the 3¼ x 4¼ format, which corresponds approximately to 82 x 108 mm, called “quarter plate”. It is in the category of magazine cameras and was very popular at the beginning of the 20th century. It was a kind of hybrid between view cameras and portable cameras. It thus represented a transition. They kept the glass plate, as in view cameras, but they were cameras to use handheld, without a tripod and without black cloth. The focus was made by distance and the framing by two viewfinders, one for portrait and another for landscape. Externally it resembles box cameras that already used the first roll films, like Kodak nº2, but it still belongs to glass plate generation.

On the page about Klito nº3 A, another magazine camera, I included a discussion about this new concept in photography commenting on its impact and reception. I have yet another Klito and on its page the focus is more on its functionalities and on the practicality of using a camera like this today, making dry plates, that is, sensitizing glass plates with a layer of silver gelatin.

Talking here about this Midg nº2 I will leave aside what is common to all magazine cameras and which has already been covered in other articles to focus more on the characteristics of this particular camera and the use of X-ray films to shoot with them. They are very viable and interesting for analog photography these days but I rarely see anyone using this type of camera.

One more recommendation is that you read the article I wrote about the Cottingley Fairies. When I went to research about this model from Butcher, I discovered that it is a famous camera. For in 1917 two girls in England photographed fairies and elves with one of these. The story is interesting and motivated me to tell it and to write this reflection on the question of authenticity in photography. Cameras, photos and other memories of Cottingley’s mysterious events are now attractions in the Science Museum in London. 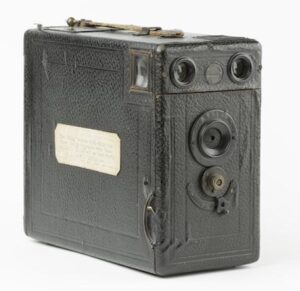 About Butcher, it has existed since 1866 and sold magic lanterns. It had little of its own manufacture and was more of an importer bringing equipment from Germany that it sold under its own brand. In 1902 he became W. Butcher & Sons and entered the camera business. The line was extensive and comprised equipment for cinematography, photo lab, projectors and even toys. In 1915, he joined Klough’s manufacturer Houghtons Ltd to form the Houghton-Butcher Manufacturing Co Ltd joint venture and share the facilities. In 1926 the two merged and formed Ensign still in the photography sector. 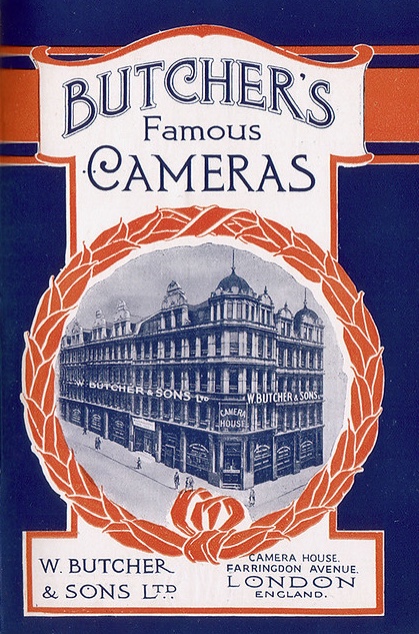 More information, especially about the line of cameras sold by Butcher, at Camera-Wiki.

Researching the camera, it is easy to see that there was a certain promiscuity in the use of parts and parts in the various models, even among different manufacturers. It is complicated to say what is exactly characteristic of Midg nº2. The model is written on the handle. But it does not correspond to what is described in the Camera-Wiki, for example. This copy was purchased at the Team Breker auction house in Cologne-Germany and was dated by them as 1902. 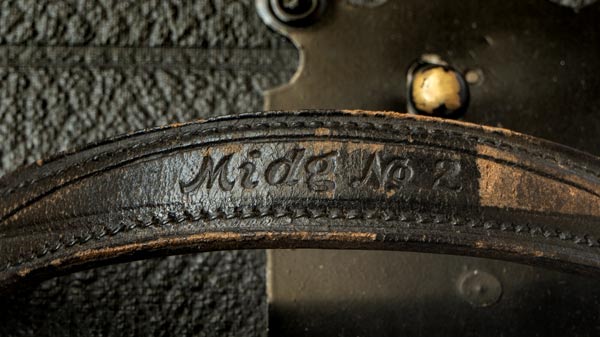 The lens used is an achromatic lens, the old type IV landscape lens in the illustration below. I even lost my first shots because the lens was inverted. I believe that at some point in its history someone cleaned it and must have intuitively put the convex face outwards. But it is quite the opposite with this type of lens. The diaphragm is in front of the lens and the light falls on the concave face and exits through the convex one.

The shutter is very simple and this guarantees its longevity if no one abuses it. It has a single speed represented by I, Instantaneous, or T for Timed. In the latter position the shutter remains open as long as the lever is lowered. It is also possible to engage the lever held in the open position in case of very long exposures.

To always guarantee the same speed, the shutter does not open when the window passes in front of the lens for the first time when the photographer’s finger action may be slower or faster. The window is dragged along with a lid and the moment it is released it comes back, without the lid, only under the action of the spring. When we return the lever to its position, the lid also returns for the next exposure. 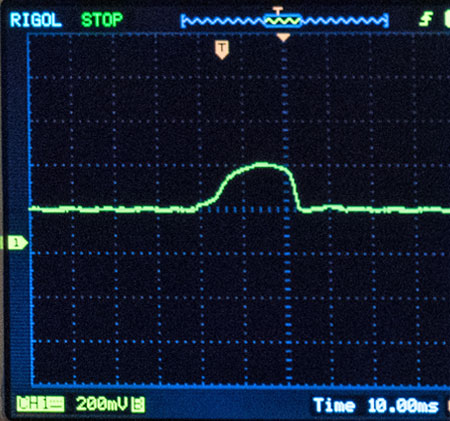 I measured the shutter speed using a photo diode and an oscilloscope. This is the image on the oscilloscope. As each division corresponds to 10 ms, milliseconds, I estimate that between the beginning of the rise and the beginning of the voltage drop in the diode, 20 ms passed. This corresponds to 1/50 s. It is enough to take pictures without a tripod with some security and to fix objects that do not move very fast. It may seem very limiting, but for external photos, 1 / 50s is a reasonable compromise. The iris diaphragm is able to guarantee a certain flexibility. 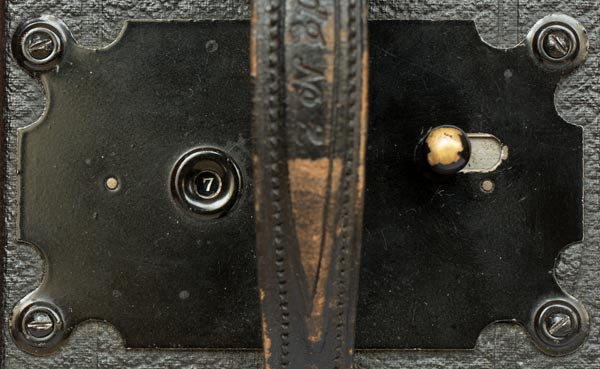 There is no protection against double exposure or a blank plate. To advance to the next plate, just act on the lever at the top of the camera, right side in the photo above, and pay close attention to the photo number on the left display. My practice has always been to move forward after each shot. Although with the most sophisticated shutters I do not like to leave them cocked without knowing when I will take the next picture, with this shutter this is not a problem as it does not cock itself with the advance of the plate. It is actually the everset type, which is armed when we fire. 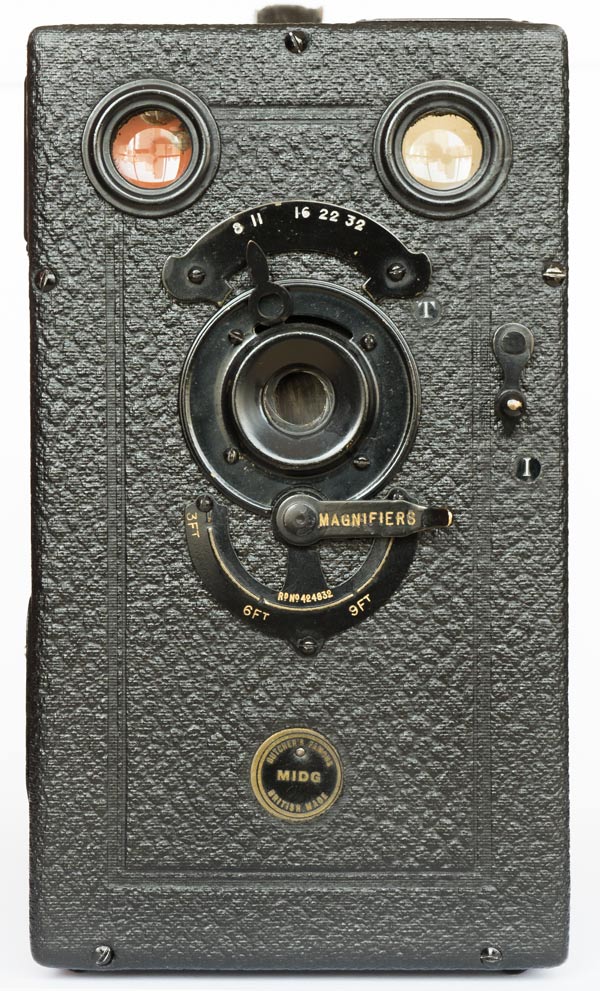 The diaphragm is of the iris type and offers the apertures already in the standard scale ranging from f / 8 to f / 32. In the picture above we see an adjustment of distances. Although the achromatic lens is fixed, when choosing 3, 6 or 9 feet, using the Magnifiers lever, what happens is that an positive lens enters in front of the objective and makes a “pre-convergence” of the light rays bringing the focus to those closer distances. See what a photographic lens does and understand how lenses focus by clicking on these previous links. 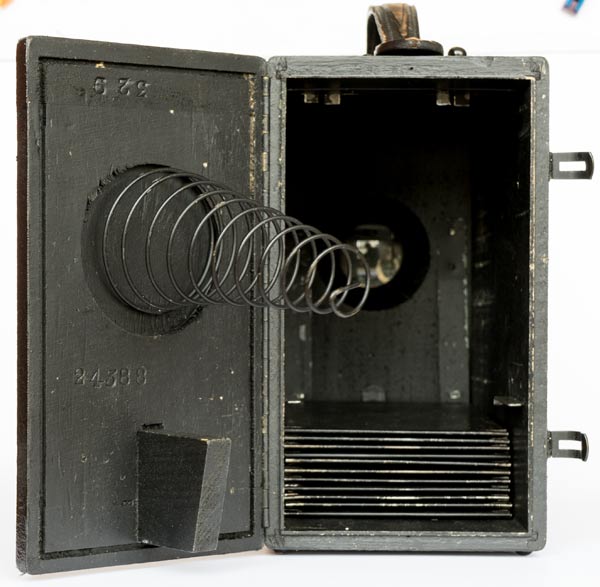 The plate advancement system is the standard one for magazine cameras. They are held in position for shooting at the top by “teeth” connected to the advance lever and at the bottom there are racks that only allow them to fall if they rotate forward. This happens when we press the lever on the top of the camera body and the plate falls down to form a stack. Hence also the usual name for these cameras as falling plate. Constant pressure from a big spring behind the back door keeps things in place. 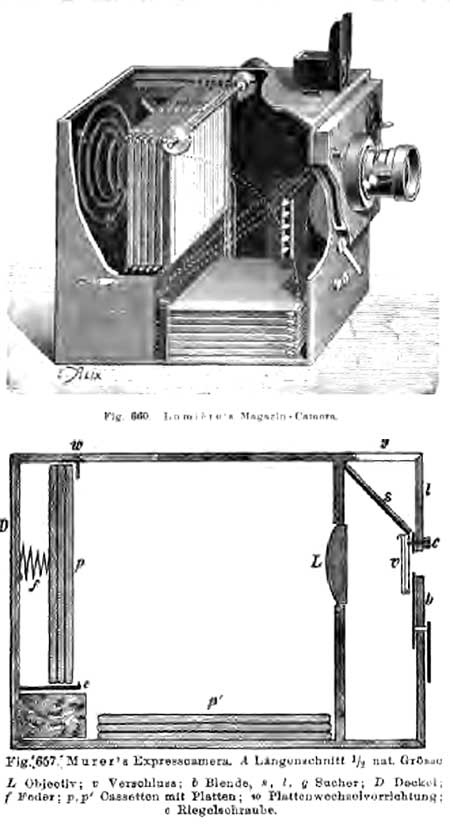 With this Midg I really wanted to try shooting without a tripod, following the original camera concept. For that I could not use the glass plates that I have made because I am reaching ISO 3 or not much more than that. The option then was the X-ray film. I used the Fuji HR-U. It could have used ordinary film, cutting it from a 9x12cm. But making this cut in total darkness is not very practical. I then opted for the X-ray to be able to cut and place it in the holders using a regular red safety light. I had some initial problems with safe light made of red RGB LEDs and X-ray film. But by decreasing the intensity and adding a red adhesive tape used in the printing and silk-screen industry, I had no more problems. 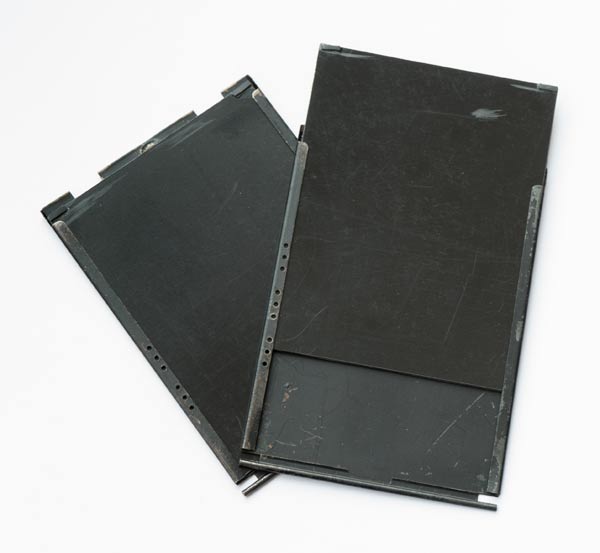 The holder needs an adaptation to be used with films. As it is made for glass plates of 1 mm, or slightly thicker, the film would be loose inside it. To avoid this problem, I cut 1 mm black PP (polypropylene) plates and they serve as shims so that the film is in the position that would be the emulsified glass surface. To top it off, I pasted two stops, visible in the photo above, that prevent the film from slipping out of place. 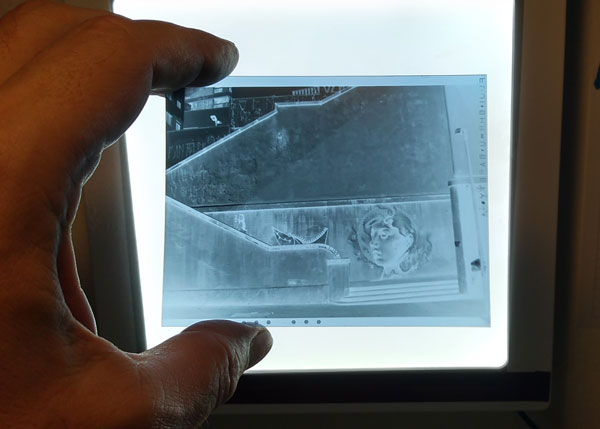 I have obtained good results with X-ray films. They have this characteristic bluish color but this does not hinder printing on multi-contrast paper. I use them as ISO 100. The developer is the homemade Parodinal in 1:50 dilution, developing at 20ºC for 13 minutes. Another option is Pyrocat HD 1: 1: 100, in this case I develop at 20ºC for 15 min. Pyrocat HD tends to give a weaker D-Max. 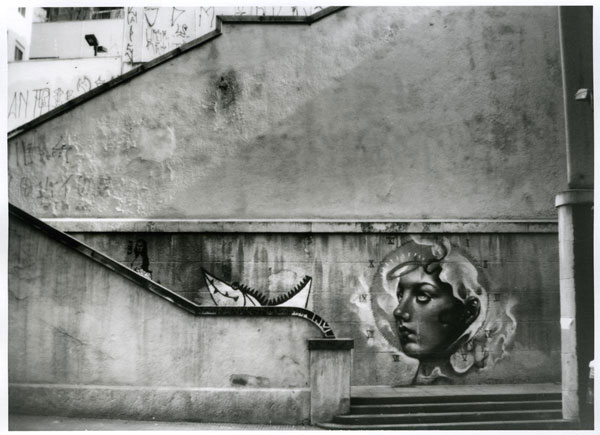 One important thing to keep in mind is that most X-ray films have emulsion on both sides. Of course, only one actually gets the picture. The other is a paler and less defined thing, but it is there too. It even looks beautiful when printed. It kind of softens the image. But this makes it very easy to scratch and flaw if developed in trays. That is why I have always developed them with film hangers. 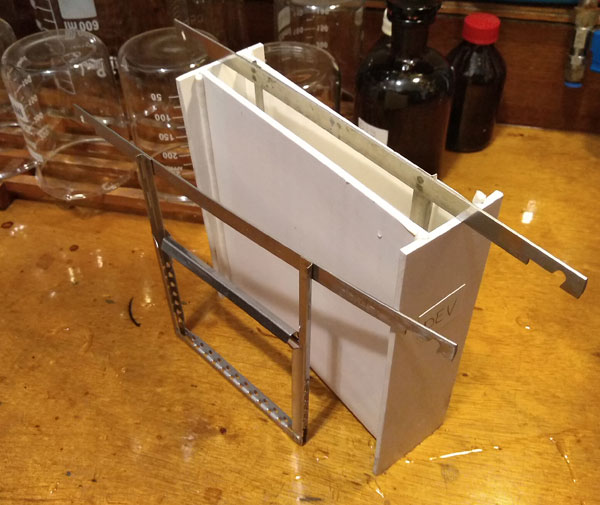 There film hangers for all formats of plates and films. What is more difficult are the tanks. When they are found they are usually huge by today’s standards. The simplest solution is to make customized tanks with PVC sheets. The one in the picture above allows me to develop two plates up to 4×5 inches with only 400 ml of developer. It consists of only 3 pieces of PVC, one of which is U-shaped and welded at the seams with its own solder and a thermal blower.

Below are some photos I took with Midg Nº2. I was surprised by the quality as I expected less. It is true that with 1 / 50s I was able to use apertures like f / 11 to f / 22. It is limited optics and the camera itself is far from accurate. But for some snapshots without much ambition, it is a very pleasing camera to use. 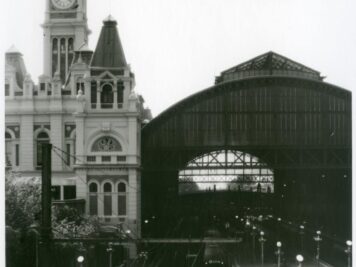 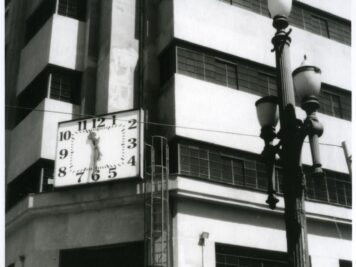 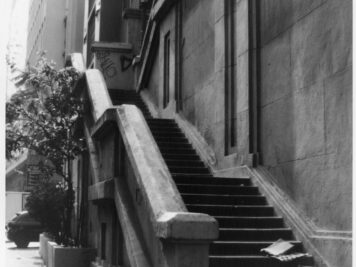 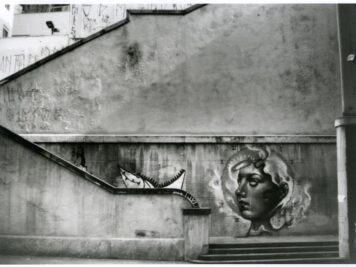