You certainly saw already a diagram more or less like this one. It is a standard way to explain what focal length is. This is how camera makers talk about focal length and they have a good reason for that: they want you to learn what focal length means in the context of their products, not necessarily in optics or photography.

What are you missing if you take that as focal length? Well, if you do so, we can say that you are fully framed in your photographic mind. That means you won’t be able to understand other formats, other sensors or other film sizes nor what a lens really is. The right way to approach the subject is to see focal length in conjunction with other concept that is image circle. Those two, together with maximum aperture, are the three key parameters that describe a lens. There is a forth one: circle of confusion. That tells the size of a point projection on film or sensor. It should be dimensionless, like a geometrical point, but in real life there are no geometrical points. Small circles are the best we can make. So circle of confusion is the size of that small circle produced by an imaginary point in an object. In this post we are going to look only into focal length and image circle. 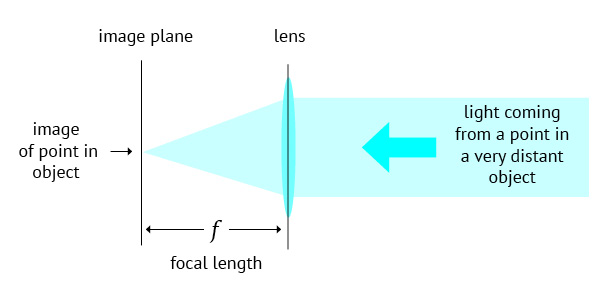 You may have seen also a diagram like this one above. This is the one that better illustrates what focal length really is for a photographic lens. It can be enunciated like this: Focal length, in a photographic lens, is the axial distance between the optical centre of the lens and the formed image, when the object is far enough to be considered at an infinite distance.

Confusing? It can become just intuitive. Let us work on it. Let us consider one little statuette as our object, and study the image that a photographic lens forms of one single spot on its forehead. We consider only one spot in order to make things simple and diagrams readable. But it works the same way for all parts of any scene or object. As you may know a photographic lens is a device with a certain light converging power. If that is not familiar to you, please read this very short post before hand: what is a photographic lens?. The animation below shows how this constant converging power works the light coming from that spot and reaching the lens surface.

Let us analyse what the animation shows:

focal length has nothing to do with angle of view

As we can see now, focus length is a figure, a very important parameter of a lens, which in first place has nothing to do with the angle it embraces. What a lens intrinsically has, according to its construction, is a focal length and an angle of view which are independent one to another. The angle of view is determined by lens construction and design. When it is more than  60º or so, we call it wide angle lens. In former times they were developed specially aiming for landscape photography. When it is less than 30º or so, we call it a narrow angle lens and historically were a pursuit of those thinking in portraiture. 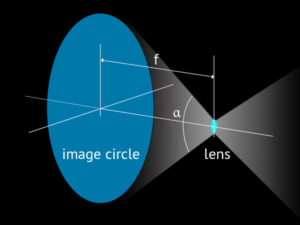 For a given focal length the angle of view will determine what we call lens image circle. It is easy to note that once f and α are set the lens image circle is also fixed. Famous wide angle lenses throughout the history covered more than 90º. The Zeiss Protar V, for instance, which is a usable lens nowadays, goes up to 110º. The same design was manufactured in different  focal lengths, from 40 to 950 mm, all of them super wide-angles. 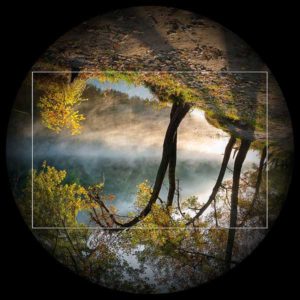 Above we have a typical image projected by a photographic lens. It is a circle and the white frame represents what the camera can use of it if an image with a 3:2 ratio is desired. The corners of the frame are almost touching the limits of that circle. A camera maker can use instead a smaller portion of it making the film or digital sensor smaller than image circle. That will be the case if the camera design allows lens shifts and tilts, otherwise it will be just a waste. That is the case in field cameras and also in modern lenses for full-frame or aps-c digital sensors when the lens itself incorporates the possibility of those shifts and tilts.

Camera makers must use lenses that project images with an image circle that is bigger than picture frame size, otherwise image will fade out at the corners.  Lenses with wide angle of view are more complicated and expensive, because aberrations are harder to control unless you sacrifice aperture. The above mentioned Pantoskop had a limiting maximum aperture of f25. Narrow angle of view lenses are relatively more simple and demand less from lens design. Are also easier to produce with more luminous apertures. (Landscape with trees, source: Wikimedia Commons, author: Balkhovitin) 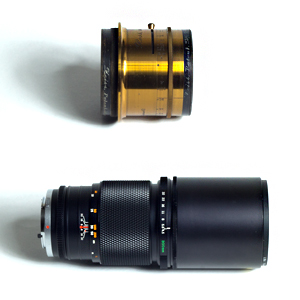 One remark about telephoto lenses: What we call telephoto lens is a special type of lens that is physically shorter than its focal length. That means, a 300 mm telephoto lens does not need to be 300 mm away from film or digital sensor and its optical centre is in fact in front and outside the lens.

The Zeiss Protar from Ross and the Olympus Zuiko telephoto lens, on the left, are both 300 mm. The first one covers an angle of 70º and the second 8º. First one is a wide angle 300 mm and the second a telephoto lens 300 mm. What does that mean? It means that the Protar design allows us to fit that lens in a camera using a film 180 x 240 mm (we normally call that 18 x 24 cm) and yet leave room for generous shifts and tilts, because its image circle has a diameter of 42 cm when focused at infinity, far more than the diagonal of a 18 x 24 cm rectangle demands – that is 30 cm. More than what is needed to have a decent image over a 18 x 24 cm. Said yet in another way, there is as surplus of image that is not used by a camera/film with that size. The telephoto Zuiko-Olympus is also a 300 mm, but its image circle is just enough to cover an image of 24 x 36 mm. Image circle diameter is certainly close to 43.26 mm, that is the diagonal for a 24 x 36 mm rectangle.

At this point it should be understandable that the first two diagrams shown at the opening of this post, are not in conflict. We can conciliate them if we consider this: 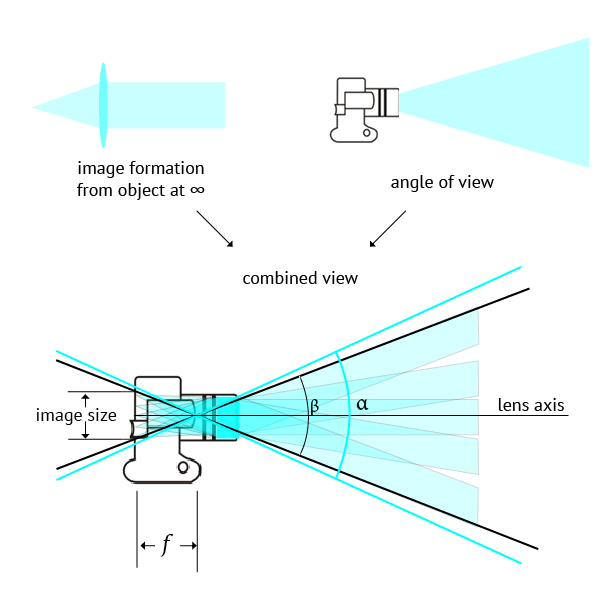 This is not a technical drawing, no formulas were used – it is rather an illustration. What it shows is that the diagram with camera angle of view is like  many overlapping diagrams with image formation for distant object points.

What we are calling here camera angle of view β is smaller than the lens angle of view α. This is to ensure that film or digital sensor fit into lens image circle and no vignetting will occur. It is slightly smaller for cameras with no movements and fairly smaller in cameras that allow for lens and/or back movements. If you understand that, then you know what focal length really is independently from brands or formats.

Why lenses are not made to be always plenty of coverage and image circle? Given a certain focal length and intended image quality, production costs grow with image circle. As said before, wide angle lenses are the tricky ones to make. For this reason camera makers do not design lenses that will cover more than what is necessary according to the digital sensor format camera uses. Besides being useless and more expensive, it would demand to implement barriers and means to avoid that unused light to reach the image in an uncontrolled way, through internal reflexions, and deteriorate image quality.

With the introduction of medium format digital sensors, like the one in the Hasselblad H5D-200c having a 50MP 43.8 x 32.9mm CMOS Sensor, and also digital backs for film cameras, the real nature of focal length and image circle must be considered if one doesn’t want to be confused about what a lens can deliver. Camera makers don’t like any promiscuity among brands, bodies and lenses, the bayonet mount is their standard barrier to avoid it. But throughout the history of photography exactly that possibility of mixing film formats and lenses has been part of the fun, creativity and mystery of the medium. So let us look forward for the day when digital photography will produce sensors with sizes and prices allowing photographers to use  simple lens boards and fit in them whatever lenses they feel like.